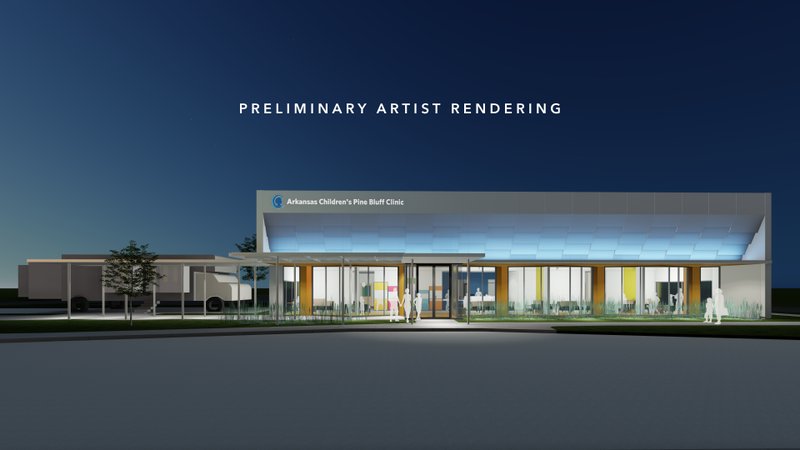 A preliminary artist's rendering of the Arkansas Children's Pine Bluff Clinic gives an idea of how the clinic could appear after construction. The renderings were created Polk Stanley Wilcox Architects.

“Simmons Bank has a rich history of supporting the communities we call home, especially our hometown community of Pine Bluff,” said George A. Makris Jr., chairman and CEO of Simmons Bank. “We are proud to invest in the new Arkansas Children’s Pine Bluff Clinic on the Jefferson Regional campus and provide a vital health care resource for families in the region.”

To celebrate this leadership gift, the clinic lobby will be named in honor of Simmons Bank.

“In these unprecedented times with the COVID-19 health crisis, we are incredibly grateful for the support of Simmons Bank,” said Marcy Doderer, FACHE, president and CEO of Arkansas Children’s. “We continue to care for sick and vulnerable children because we know that delayed care could result in lifelong health complications. Our children need us now more than ever.”

According to data by the Henry J. Kaiser Family Foundation, 52 percent of children in Arkansas do not receive coordinated, ongoing, comprehensive care within a medical home. The new pediatric clinic will provide care close to home for families in southeast Arkansas, including preventative care, developmental screenings, community resources and health education.

Initial plans estimate that the Arkansas Children’s Pine Bluff Clinic will be an approximately 10,000 square-foot facility with 14 exam rooms, team collaboration space and a welcoming lobby with kid-savvy spaces. The clinic physicians will also provide frontline care to newborns receiving care in the NICU who are delivered at Jefferson Regional. The new clinic requires a $17.5 million investment to fund construction and operating expenses over the first five years.

“Jefferson Regional provides vital health care to the southeast region of Arkansas,” said Brian Thomas, president and CEO of Jefferson Regional. “Providing a new pediatric clinic in association with Arkansas Children’s will ensure we have long-term stability to continue providing the children of this region great health care. Jefferson Regional is grateful for the continued support from Simmons Bank.”

Campaign for a Healthier Tomorrow

By most national measures, Arkansas is one of the least healthy states ranking 40 out of 50 states in overall child health and well-being. Arkansas Children’s envisions a healthier tomorrow for all 710,000 children in the state – for both longtime patients and the children who will never walk through the doors of Arkansas Children’s.

Since 2015, the Campaign for a Healthier Tomorrow has secured more than $220 million in gifts toward a $250 million goal:

-In 2015, Arkansas Children’s invested in two new S-76D Sikorsky Angel One Helicopters with the ability to reach a child anywhere in the state within 55 minutes. Since 1978, the Angel One Transport team has transported the most critically ill and injured patients to Arkansas Children’s and established a statewide network of care for children in Arkansas.

-Arkansas Children’s Hospital (ACH) has the state’s only level IV NICU. In 2016, ACH announced the creation of the ACH Nursery Alliance to collaborate with hospitals around the state to provide infants the care they need close to home. Since the program’s inception, the ACH Nursery Alliance has established partnerships with Conway Regional in Conway, CHI St. Vincent in Hot Springs, Jefferson Regional in Pine Bluff, Medical Center of South Arkansas in El Dorado and Ashley County Medical Center in Crossett.

-In 2016, Arkansas Children’s established the David M. Clark Center for Safe and Healthy Children, a place dedicated to the care and treatment of neglected and abused children and their families. The Center is a single, safe place for children to receive medical, psychological and social health services and provides support by providing outpatient medical evaluations for children at the Medical Clinic, Family Treatment Program and Team for Children at Risk.

-In 2017, the ACH Southwest Little Rock Community Clinic opened. Staffed with bilingual physicians and nurses, the clinic provides general pediatric and preventative care to families in the region. ACH clinics in Jonesboro and West Little Rock also provide pediatric care to children in the state.

-In 2018, Arkansas Children’s Northwest (ACNW) became one of the nation’s newest children’s hospitals. Located in Springdale, ACNW provides care for more than 20 subspecialty areas, has a general pediatric clinic and is the region’s only pediatric emergency department. To date, ACNW has received commitments of more than $100 million to support care close to home in Northwest Arkansas.

-In 2019, Arkansas Children’s publicly launched the Campaign for a Healthier Tomorrow and celebrated statewide donations of more than $200 million to support our promise of unprecedented child health, defined and delivered.