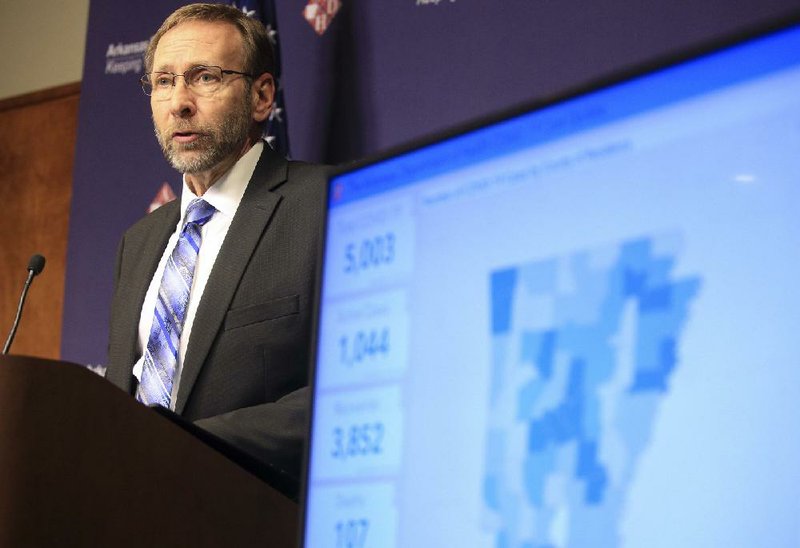 Confirmed cases of COVID-19 in Union County rose by four between Tuesday and Wednesday to reach 121, two of which are in health care workers at Courtyard Healthcare and Rehab, according to the Arkansas Department of Health.

In all, nine health care workers and 17 residents at Courtyard Healthcare and Rehab have tested positive for the novel coronavirus, for a total of 26 cases within the nursing home’s outbreak.

Dr. Naveen Patil, medical director for infectious diseases at the ADH, spoke at the update about the state’s response to infectious disease outbreaks. He said disease control research and preparation has been ongoing at the ADH for a number of years after the department received federal funds for the purpose as a result of the 2014 Ebola outbreak in the United States.

Patil leads the prevention and control team, which he said has attracted the interest of state and national health officials outside of Arkansas. Because the ADH already had strong relationships with health care facilities, and in particular congregate facilities like nursing homes and assisted living facilities, introducing an aggressive response model has been easier than it would have been had they not, he said.

“We were an early adopter of facility-wide testing in congregate settings and have aggressive control measures … When a positive case is identified, we respond immediately,” he said. “Within 24 hours, our goal is to test everyone in that facility. Our goal is to have results within 48 hours, so within 72 hours the whole process is completed. Then we held to guide control and isolation and prevention to limit spread.”

The ADH rolled out a new statistical map today which includes more information than the one previously utilized, including world COVID-19 statistics and demographic breakdowns of cases and deaths in the state. The new tool is accessible by visiting healthy.arkansas.gov/programs-services/topics/novel-coronavirus.

Statewide, 80 new cases of COVID-19 were confirmed by 5:45 p.m. Wednesday, putting the state at 5,003 cases, a new milestone. Of those, 1,044 are still considered active, while 3,852 are reportedly recovered, according to the ADH. Five more Arkansans, including four nursing home residents, died as a result of COVID-19 between Tuesday and Wednesday, bringing the state’s death toll to 107. The state’s mortality rate has stayed steady at 2.1%.

Guidance was released Wednesday for the reopening of sleepaway summer camps in Arkansas. According to the ADH, counselors will be allowed to head to camp on May 24, this Sunday, while campers will be allowed to arrive on May 31. Hutchinson is expected to provide additional information on sleepaway camp and summer sports guidance today at the state’s daily health update.

Smith said Wednesday that 79 Arkansans are currently hospitalized as a result of COVID-19, with 16 using ventilators.

According to the U.S. Centers for Disease Control, there were 1,528,235 confirmed COVID-19 cases in the country at 6 p.m Wednesday, with 91,664 Americans having died as a result of the virus, indicating a national mortality rate of 6%.