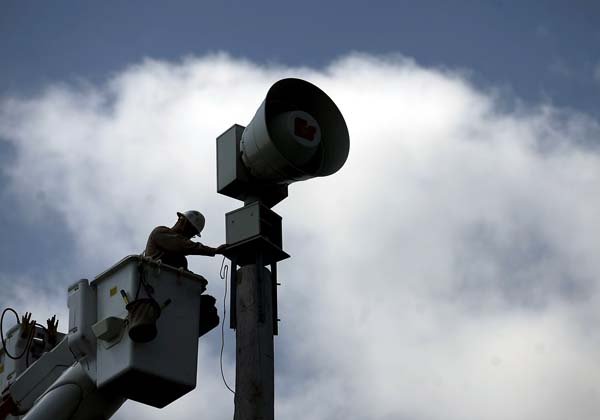 The El Dorado City Council will tend to several items when they convene for a regular meeting at 5:30 p.m. today in the Council Chamber of City Hall.

In January, city officials learned that only one of the eight sirens is operating at full capacity. The sirens were installed about two decades ago.

Marty Burns — of Ark-La-Tex Two Way, a telecommunications company that has been servicing the sirens for about a decade — told council members then that each unit contains four speakers and a thorough evaluation conducted in 2018 determined that a total of 10 speakers were out.

On April 30, Council Member Judy Ward, who represents Ward 2, Position 2 and lives near one of the sirens, said the sound in the emergency warning unit in the 2200 block of West Hillsboro had gone out since Burns’s appearance before the council.

The siren in the Hillsboro unit was not clearly audible when the system sounded last weekend during severe storms that rumbled through the area and prompted a tornado warning.

No damages or injuries were reported in El Dorado due to the storms.

Council members agreed April 30 to seek bids for a new stationary emergency warning system, rather than rotating units, which are in place now.

Council Member Vance Williamson, also chairman of the Finance Committee, made the motion and said that he and Robert Edmonds, director of public works, had discussed presenting a funding request to the El Dorado Works Board to cover the cost of a new emergency warning system.

The EWB administers the city’s 1-cent sales that is earmarked for economic development, municipal infrastructure and quality-of-life projects.

Bid proposals for an emergency warning system are due by 4 p.m. Friday. One vendor is scheduled to give a demonstration today.

The city has been without a downtown parking enforcement officer since January of 2019 and downtown business and property owners have said that a lack of enforcement of the ordinance is affecting business because downtown workers are taking up convenient parking spots that could be used by customers.

A parking advisory committee has met a few times within the past year to come up with solutions to the problem.

Mayor Veronica Smith-Creer and some members of committee have said “there isn’t a downtown parking problem, but, rather, a downtown walking problem,” meaning that some downtown workers do not park outside the controlled parking zone and walk to their workplaces.

Union County Judge Mike Loftin and two other county officials recently gave up their designated parking spaces around the Union County Courthouse to free up parking for downtown visitors.

The council will also consider 2020 budget adjustments, which were presented during a Finance Committee meeting Tuesday.

Blann noted then that the council typically handles budget adjustments at the end of each year.

Blann sharply objected to the auditors’ recommendation, telling Williamson, “You can follow the auditors if you want to. I’m not. The government needs to work for the employees.”

“The budget has to be balanced,” Williamson replied.

“We’ve been balancing it at the end of the year for years and it’s worked,” Blann shot back.

Ward is on today’s agenda to discuss the city’s sign ordinance.

During a previous meeting, Ward noted that the El Dorado Planning and Zoning Commission had worked years ago on drafting a new sign ordinance to clean up and combine several city ordinances that addressed signage in the city and she inquired about the status of the project.

Health and safety measures will remain in place for the council meeting due to the coronavirus (COVID-19) pandemic. Public access has been restricted at City Hall since March 13.

People who wish to attend the council meeting must undergo temperature screenings that will be conducted outside City Hall by the El Dorado Fire Department and wear a protective face mask upon entering the building.

Chairs will be set up in the lobby of City Hall for audience members. The chairs will be at least 6 feet apart. City officials and others who enter the Council Chamber will practice social distancing.