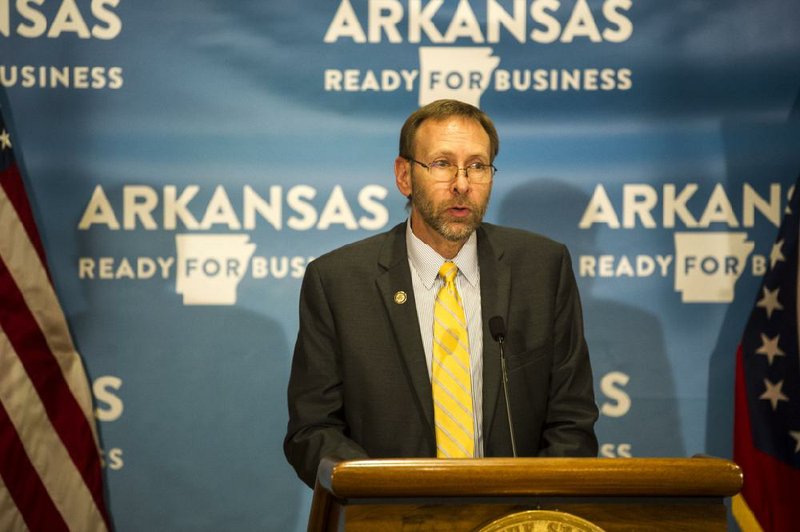 Dr. Nathaniel Smith, Secretary of the Department of Health, addresses the media during a daily update on Arkansas’s response to COVID-19 on Tuesday, May 19. - Photo by Stephen Swofford

Ten new COVID-19 cases had been confirmed in Union County since Monday evening by 5 p.m. Tuesday, according to the Arkansas Department of Health, putting the total number of local cases at 117.

Dr. Nate Smith, ADH Secretary, said during the state’s daily health update that he doesn’t attribute spikes in cases as seen in Union County, as well as St. Francis County, to reopening businesses; instead, he said, the newly confirmed cases are evidence of the state’s expanded testing capacity.

“We have a total all over of 1,082 active cases. Only three of them had reported being to a restaurant within that incubation period; only six had reported being to a barbershop; 10 to a church; three to a daycare; and four to a gym. Each of those are 1% or less, so these activities don’t appear to be driving our community cases at this point,” he said. “Since we’ve tripled our testing rate, we are finding a lot of cases, especially asymptomatic cases that we weren’t picking up before this. … This is really more a function of our testing and where we’ve targeted testing in the state.”

Almost 100 negative tests were returned to Union County between Monday and Tuesday; so far, the ADH reports 672 negative tests results locally. Alex Bennett, director of business development for the Medical Center of South Arkansas, and Pete Atkinson, chief executive officer of the South Arkansas Medical Center (SAMA), said Monday they’d respectively tested over 800 and 300 Union County residents and both facilities are increasing their testing capacity. Testing is also available at the Union County Health Unit at 301 American Rd (across the drive from the Union County Sheriff’s Office).

No new deaths have been reported in the county since Monday, leaving the death toll at four. Of the 117 confirmed cases in the county, with 71 recoveries reported — an increase of two from Monday — 42 cases remain active, up eight from Monday. The county’s mortality rate dropped to 3.4% Tuesday.

In Arkansas, confirmed cases grew by 110 to 4,923 total; four of those new cases were found in correctional facilities, Smith said, while the remaining 106 were in the community. Of the 1,082 active cases, Smith said 83 are in nursing homes, 369 are in correctional facilities and 630 are in the community. He noted that some results have not been entered into the ADH’s online COVID-19 statistics tool.

Two more Arkansans died from COVID-19 between Monday and Tuesday, putting the state’s death toll at 102. The state’s mortality rate was 2.1% Tuesday evening.

Rachel Bunch, director of the Arkansas Health care Association, appeared at the daily health update Tuesday to give a thanks to nursing home workers and talk about the state’s COVID-19 response at nursing homes. She said Smith has implemented a ‘rapid response’ strategy when cases are discovered at nursing homes, where every staff member and resident of the facility is tested as soon as possible.

Gov. Asa Hutchinson also announced that starting June 1, the state will have a goal of testing every nursing home resident and worker in the state, regardless of whether cases have been discovered within the facilities. No new cases have been reported at Courtyard Health and Rehab in El Dorado, which last reported 22 cases split between 15 residents and seven staff members.

Hutchinson was again asked about a security vulnerability discovered in the state’s Pandemic Unemployment Assistance application website; a reporter at the daily health update asked whether the state or the private contractor who built the site bore responsibility for the vulnerability, which was discovered by an applicant and left 30,000 PUA applicants Social Security Numbers, banking information and other personal data potentially exposed.

Hutchinson said the state was ultimately responsible for the vulnerability, but “the contractor has responsibilities to be sure they use the best practices.”

Hutchinson said Saturday the applicant who discovered the vulnerability had acted “illegally” in his discovering the problem; however, according to reporting from the Arkansas Times, the applicant, a computer programmer by trade, simply had to remove letters in the website’s URL to access other applicants’ personal data, and they immediately tried to notify two state agencies. The vulnerability is under investigation by the Federal Bureau of Investigation.

Hutchinson said the website and applications are currently still “on pause,” but that a forensic investigation is ongoing to determine whether anyone’s personal data was stolen. He said the state wants to cut checks to those eligible for the PUA, provided for by the federal CARES (Coronavirus, Aid, Relief and Economic Security) Act for gig workers, contractors and self-employed people, as soon as possible. He did not say when the site may go live again.

“In government, we learn to do better every day,” he said.

Today, Hutchinson is slated to meet with President Donald Trump and Vice President Mike Pence to discuss the state’s response to the COVID-19 pandemic, the food supply chain, including the health and safety of food supply workers, and support for farmers. Hutchinson said he will wear a mask, which Trump and Pence have been criticized for not doing, during the meeting; he will also undergo his first COVID-19 test in order to enter the West Wing at the White House, he said.

Worldwide, according to the World Health Organization, 4,735,622 cases have been confirmed, with 316,289 deaths reported, indicating a global mortality rate of 6.7%.

[Video not showing up above? Click here to watch » https://www.youtube.com/watch?v=Hrgm4pwgRKA]