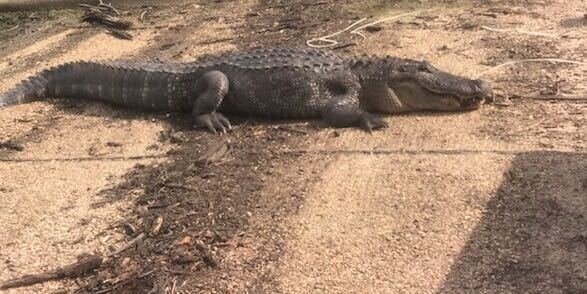 An approximately 10.5-foot, 400 pound male American alligator estimated to be about 25 years old was relocated from a sawmill in Huttig by the Arkansas Game and Fish Commission on Friday, May 15.

Workers at a sawmill in Huttig were in for a surprise when they arrived at work last Friday and an estimated 10.5-foot, 400 pound alligator was found on the truck scales, where log trucks are weighed.

The Arkansas Game and Fish Commission relocated the alligator to public lands in an undisclosed area.

“Alligators during this time of spring are coming out of their wintering sites and beginning to move around,” said Keith Stephens, AGFC chief of communications, in an email correspondence. “Males are looking out for females during this time. It is also a possibility that a younger male alligator has been pushed out of his home range due to a more mature male alligator moving into his space.”

Alligators have a fraught history in Arkansas; while they are native to the state, by the early 1960s, habitat loss and unregulated hunting had almost eliminated the animal from the region, Stephens said.

“The depleted alligator population persisted only in the southwestern corner of the state,” he said. “As a result, the Arkansas Game and Fish Commission enacted a regulation to protect the alligator in 1961.”

In 1967, the United States Congress passed legislation to list alligators as an endangered species. Ten years later, the U.S. Fish and Wildlife Service down-listed them to ‘threatened’ status and by 1987, they were considered ‘recovered,’ although, Stephens said, they are still listed as ‘threatened due to similarity of appearance’ due to their shared physical characteristics with crocodiles, products derived from which are legally traded.

In 2007, Arkansas began to re-allow alligator hunts, albeit with strict regulations on the alligators that are allowed to be hunted, a permit requirement, with permits distributed via lottery, and a bag limit of one.

On Friday, the AGFC was able to relocate the alligator found in Huttig to public lands.

“Locations are not revealed in the attempt to prevent the opportunity for individuals to go and find them,” Stephens said, noting that individuals have sought out gators in that way before. “Each situation is different from the next, so there is no one fix for all. If the landowner wished the alligator to be removed, the AGFC personnel will assess the given situation and come up with an extraction plan.”

Stephens advised that if south Arkansas residents see an alligator, they leave it alone, and if they have concerns about the alligator causing property damage or personal injury, they contact the AGFC.

“Arkansas is divided up into regions, with each region that has alligators or the potential to have alligators (having) a Nuisance Alligator Coordinator (NAC). NAC is part of the Wildlife Management Division and all alligator calls are routed to that region’s NAC,” he said. “The NAC, upon accessing the situation, will make the call if assistance is needed other than wildlife management personnel. If needed, the NAC may, and have in the past, reached out to local law enforcement as well as Wildlife Officers to assist with the capture and relocation efforts.”

Stephens estimated that the alligator found Friday was about 25 years old. He said it was a male. According to the Smithsonian National Zoo, male American alligators average about 11.2 feet long and can weigh up to 1,000 pounds.

“The folks at the mills and in Huttig were very appreciative of having the gator gone,” Stephens said.