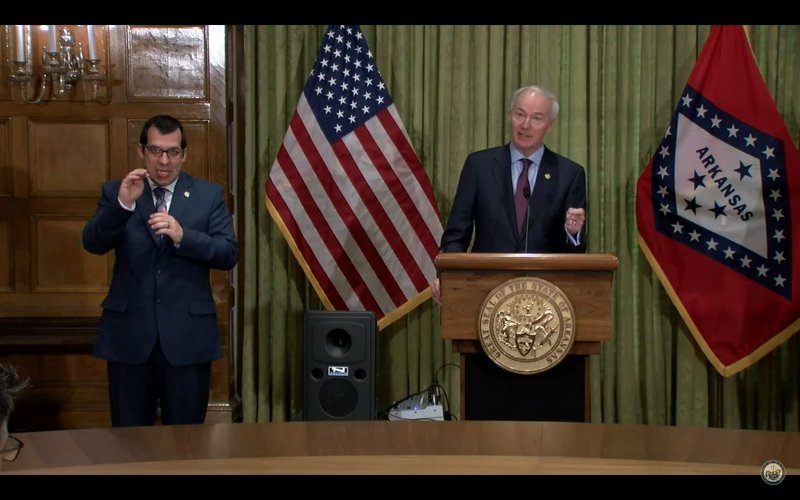 Gov. Asa Hutchinson speaks to reporters during a daily press briefing held at the State Capitol Monday. Not pictured are Secretary of the Department of Health Dr. Nate Smith and Sec. of the Department of Parks, Heritage and Tourism Stacy Hurst, who also appeared a the press conference.

“I don’t know what the latest number is today, but I do know there is still an excess demand in terms of being able to get through our telephone lines,” he said. “We’re trying to upgrade our IT (information technology) systems; we’re working really hard on that. We’ve brought in extra resources and personnel to process those claims and answer those calls, but we’ll continue to monitor that.”

The Murphy Arts District announced the lay-off of 49 employees last week. Retailers like TJ Maxx have also closed their doors. The St. Louis Fed has projected unemployment rates could reach 32% by the end of the coronavirus crisis.

For many, rent will be due tomorrow, April 1. Hutchinson said he expects landlords and bankers to be compassionate in cases where tenants are unable to pay, and noted that the federal CARES (Coronavirus Aid, Relief and Economic Security) Act has provisions protecting those in federally subsidized apartments from eviction and those with federally-backed mortgages from foreclosure.

“I expect landlords, bankers to act responsibly and compassionately at this time,” Hutchinson said. “If we see problems out there or unfair behavior, then we will take another look at that. But I think the marketplace is working as it should, with compassion under these circumstances.”

Local retailers are finding creative ways to continue business as they shutter their storefronts in light of the pandemic. In an email, Rexayn Tribble, owner of All About Flowers, said her business has delivered flowers to the Medical Center of South Arkansas nurse stations, Gold Cross Urgent Care and all five of El Dorado’s nursing homes.

Tribble said members of the Downtown Business Association also placed 20 ribbons meant to remind local residents to pray for those affected by COVID-19 throughout the downtown area last week. Residents can also place reminder ribbons, she said; they are for sale at All About Flowers for $5, including tax.

“Of course I would love to sell hundreds of bows but more than that, I want those on the front lines, keeping us healthy, to know we are thinking of them!” Tribble said in an email.

Many small businesses in El Dorado are still open through delivery and pick up services, including All About Flowers. Contact the store via phone or online for more information.

The governor said he expects depressed tax revenues to become apparent in May, noting that a revised revenue forecast is being compiled by himself and Larry Walther, Secretary of the state Department of Finance and Administration. Hutchinson said he expects the revised forecast to be released before the state Legislature meets for their fiscal session, which is scheduled for April 8.

“The budget that we’ve presented is based upon the Revenue Stabilization Act and that should work fine even though the revenue forecast might be lowered, and it will be lowered to some extent,” Hutchinson said. “That should be before the fiscal session.”

Last week, the state government passed legislation creating a COVID-19 Rainy Day fund with $173 million set aside in it to offset budget holes created by the pandemic, as well as to purchase resources the state will require in fighting the outbreak.

Hutchinson announced yesterday that he will allocate $45 million from that fund towards procuring personal protective equipment (PPE) for health care providers in Arkansas. He said demand projections show that $30 million previously allocated toward that purpose will be insufficient to keep providers stocked.

Because Arkansas has relatively few cases compared to “hotspots” in New York, California and New Orleans, Louisiana, among other locations, the state is lower in the priority list for supplies like PPE and ventilators. Hutchinson said on Sunday the state is due for a shipment of 500 ventilators to add to the current stock of about 571. One supplier told Hutchinson their company’s demand exceeds their capacity to produce by 64 percent, he said.

“As they’re having to devote an enormous amount of resources to that venue, it makes it even more challenging for states like Arkansas to get in that supply chain,” Hutchinson said. “We can place an order and … the Department of Defense can come in and say ‘we need that,’ or it might be New York offering a premium. So we’re having to compete in a very difficult marketplace.”

The state is also low on the testing kits needed to automate the testing process for potential COVID-19 cases, as well as the chemical reagents needed to perform tests, Hutchinson said, since Arkansas is not considered a “hotspot” for the coronavirus outbreak. It is unclear how much the lack of testing materials is affecting the data on the state’s cases.

“Every state that is not a hotspot is struggling to get the — we have the equipment — to get the testing kits we need to do the testing,” Hutchinson said. “I was on the phone with multiple labs today asking ‘can you move us up in priority?’ in terms of getting those testing kits. … We have challenges that other states don’t have because the CDC (Centers for Disease Control), the vendors and others have put a priority on those hotspots.”

Hutchinson announced that the state will receive federal funds to help with the COVID-19 response though the CARES Act. He said he anticipates that Arkansas will receive $1.25 billion within the next month; it must be spent by Dec. 30, he said.

“It will be used for costs related to the COVID19 crisis and were looking for further interpretations, but I do not anticipate that that can be used for filling the holes in the budget even though the postponement of the tax deadline and the filing deadline is a result of the COVID-19 crisis,” he said

The funds will go toward the acquisition of hospital beds, ventilators, respirators and PPE, Hutchinson said. The governor signed an executive order today appointing a 15 member steering committee to make recommendations for the federal funds’ use. The committee is made of state legislators recommended by Speaker of the House Matthew Shepherd (R-El Dorado) and President pro tempore of the Senate Jim Hendren (R-Gravette) and members of the governor’s cabinet. Neither the Speaker nor the President pro temp sit on the committee, nor do any other legislators from Union County, according to Arkansas Talk Business & Politics.