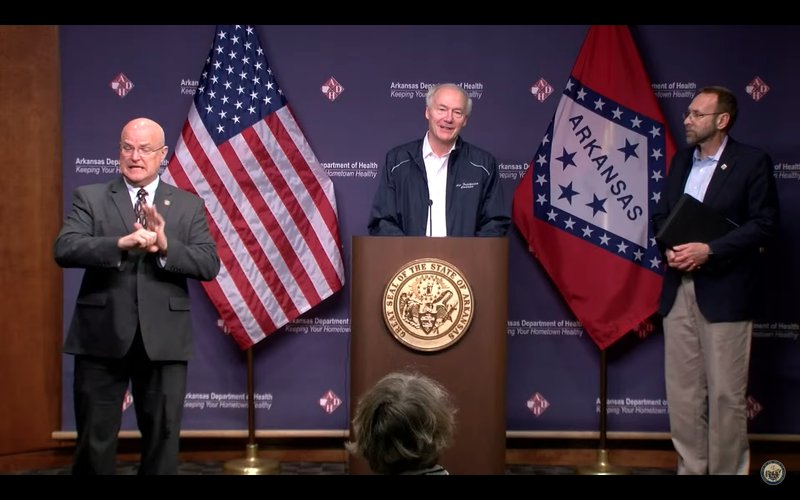 Gov. Asa Hutchinson updated the press on the state’s current situation with regards to the novel coronavirus (COVID-19) pandemic Sunday afternoon at the Arkansas Dept. of Health. Sec. of Health Dr. Nate Smith (right) joined him.

Gov. Asa Hutchinson said Sunday during his daily press briefing that the rate of newly confirmed cases of the novel coronavirus, which causes COVID-19, seems to be slowing in Arkansas.

Hutchinson reported that confirmed cases in the state had reached 426, up 22 since 24 hours earlier. Between Thursday and Friday, the number of cases had risen 46 and between Friday and Saturday, it rose by only 23.

“While it’s too early to know for sure, we are encouraged that we are not accelerating as fast as other parts of the country,” Hutchinson said. “The anticipated acceleration rate puts us on a very fast curve upward and we’re hoping that the fact that our acceleration rate is not at that high of a level is a good sign for us and, most importantly, that our social distancing, our discipline, our limitations on gatherings is having an impact. So we’re on the right strategy, we just have to keep the course, not quit on this and work hard on this every day.”

Hutchinson also reported an additional death, bringing the state’s COVID-19-related death total up to six. Secretary of Health Dr. Nate Smith said the person who died was older than 65 and had previously been hospitalized for COVID-19 but was released after appearing to be recovering.

“Unfortunately, there are many things that are challenging in caring for a new disease where our clinicians don’t have years of experience,” Smith said. “They do their best, but sometimes people can seem to be getting better, but then they take a turn for the worse.”

Smith said COVID-19-related deaths in Arkansas are presumed to be due to respiratory problems. He noted that case reports globally have also indicated heart problems arising as a result of the virus.

“It can be difficult to tell between just lung or someone who is having a disease that’s involving both the lungs and the heart. It’s not always possible to completely sort that out,” he said. “Clinicians who are treating these patients are looking out for both.”

Smith gave his usual demographic breakdown of confirmed cases in Arkansas, along with some additional information about those with pre-existing conditions and cause of infection. Currently, 15 children, 135 people age OVERSET FOLLOWS:65 or older and 276 people ages 18 to 64 have contracted COVID-19.

Five fewer people were hospitalized Sunday than were Saturday, putting the state at 43 hospitalized. There are 16 patients on ventilators, down one from Saturday. One additional case has been confirmed inside a nursing home.

Recoveries are up four from Saturday at 28.

Smith also encouraged residents to consider social distancing guidelines — including keeping a distance of at least 6 feet between oneself and others — when shopping at the grocery store. He recommended elderly people send others to the store in their place and that people try to avoid peak shopping hours, such as immediately after the work day ends.

“When you go, we don’t all need to be crowded together. Spacing out lines, maintaining that 6 foot distance, so that we do what we need to do but in a way that doesn’t put us at unnecessary risk for COVID-19,” he said. “Let’s keep doing what we’re doing so we protect ourselves and our communities and not have an explosive situation like we’ve seen in some other states.”

The governor also talked about the state’s capacity for testing individuals for COVID-19. Testing has slowed in recent days as supplies of reagents necessary for testing for the virus have run low or out. It is unclear whether the amount of testing taking place has affected the rate of cases being confirmed.

“[If I could,] I would move Arkansas up in the priority. We’re doing all we can to move us up in the priority, but these decisions are made largely by the private sector,” Hutchinson said. “We’re doing what every state is doing, both for PPE (personal protective equipment) and reagents that we need — we’re waiting in line.”

Hutchinson said he has been in contact with private actors to continue trying to secure testing reagents and PPE for the state, adding that he hopes to announce good news on that front at today’s briefing.

“We’re scrambling,” he said. “The federal government is a good partner — they’ve given us supplies, they’ve supported us — but they’ve made it very clear that it’s up to the states to do their own procurement on this, so that’s what we’re working on.”

He said he hopes the apparently lower-than-expected acceleration rate of new cases will allow supply lines to be more open and therefore supplies more available by the time Arkansas peaks in cases. He noted that the state requires more data to get a fuller picture of the acceleration rate and likely peak, which is why testing is so important.

Hutchinson also addressed a tornado that hit Jonesboro on Saturday, injuring 22 people and destroying property. On Saturday, he declared via proclamation that Sunday would be a Special Day of Prayer and yesterday he encouraged Arkansas residents to keep those in Jonesboro in their prayers.

“While we work hard, we try to act every day, we encourage responsibility; we also recognize our own limitations and the need for providential protection,” he said.

At presstime Sunday, Union County was shown to have reached five confirmed cases of the novel coronavirus, with 46 having tested negative locally. Neighboring Columbia, Bradley and Ashley counties were shown to have between one and four cases each, while Ouachita and Calhoun counties still have zero confirmed cases, according to the Arkansas Department of Health.

HOPE Landing announced Sunday that it will remain closed until schools within the El Dorado School District reopen on April 20.