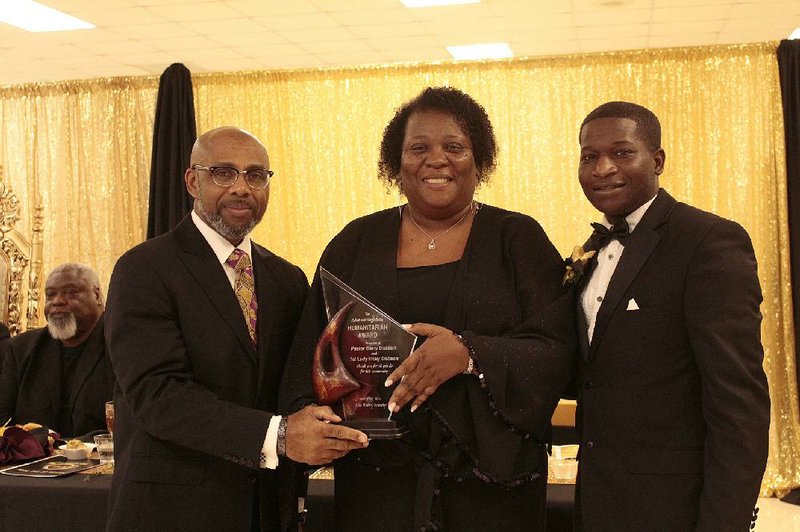 The Rev. Barry Dobson and Vicki Dobson, left, were recognized with the first ever Robert and Margie Bailey Humanitarian Award by James Curley, Veronica Bailey’s son, at the sixth annual Black History Youth and Person of the Year dinner February 2020. The reverend has been pastoring for 28 years. - Photo by Caitlan Butler

The road from cancer and the test it posed St. John Missionary Baptist Church’s congregation changed the Rev. Barry Dobson and his family.

He said he learned more about himself but also learned much more about trusting in God — his journey, he said, still continues today.

After being raised in El Dorado and running from the call to preach at 17, Dobson surrendered to the ministry at 20 while at Ouachita Baptist University.

Q: Could you talk to me about your journey from receiving the call to now?

A: I was going to Ouachita Baptist University; that was a great foundation for where my Christianity was concerned. But even before that, my parents, my grandparents and just the members of the church of where I was a member of were very encouraging. I was always told, “You’re going to be a preacher one day.” … I always enjoyed being active in the church, but that was far from my mind. … I had a lot of encouragement. I guess people saw something I didn’t see or hear for them to say that, but when I felt God’s calling at age 17 I said, wow. I said, ‘I don’t want to do this, I don’t want to be a preacher, I don’t want to preach, I don’t want to pastor.’ That was far from my mind. … (The call) got stronger and stronger. That spirit was very convincing. I was on Ouachita campus, it was 1983. I remember very vividly, just an experience — almost sometimes hard to find words to describe it. It was an experience that God just broke me down to a point where I had to surrender. It was on a Wednesday evening, I was coming from a dining hall. I couldn’t take that pressure anymore. I couldn’t eat, I couldn’t really focus on my study because … His conviction was on me so bad.

Ouachita, they’ve got a ravine with a long bridge across. I got in the middle of that bridge and said, ‘Lord, whatever you want me to do, here I am.’ …

It’s been a great, great journey because the people I’ve been around have been very encouraging. … Even my friends and some of them were hanging out in high school especially, they said even after the fact, we knew you were different from the rest of us, there was something about you. We kind of figured something of this nature would happen to you…. They never told me during school. I was an athlete, try to be athlete. I wanted to go as far as I can in athletics. … One thing I went to college for, football, I got injured and couldn’t play — I think that was all the plan of God, to set it up, to get my attention off of everything else and put my attention on what He was calling me to do, and here I am today.

I consider (us to be) married early. I was 20, my wife was 19, and we had a child when I was in college and she was in college. … We had to grow up real quickly … The journey’s been excellent. True enough, I had my days where I wanted to throw in the towel, I’ve had my stormy experiences, but when I look back at it now, and I do that a lot, I reflect, I’ve been blessed. Majorly blessed. I can’t complain.

In 2017 I was diagnosed with neck cancer. I’ve been pastoring, 26 years at that time, 28 now years I’ve been pastoring. The church, they were awesome while I was out. I had so many people, the pastors of the city, so, so many people support me during that time and it’s still going. I have nothing to feel bad about, to gripe about or anything of that nature of what the Lord has done in my life at this point. …

We have three girls, and the roles have flipped. They’re the parents now.. They experienced that with me. I don’t how long the Lord will let me live on this side, that may be at the peak of our family experience was when I got sick at that time. I’m doing well now, still doing well, people still telling me to be careful, to take care of yourself and still encouraging. … I love people; I guess if I didn’t, the Lord wouldn’t put me where I am today. I love people and that encouraged me to study more, to pray more, so I could return more what my calling is, and that is to spread the Gospel, good news of Jesus Christ to people who will hear, and even those who don’t hear.

If I would’ve known at age 17, at which I felt my calling, what I know now, I would’ve accepted it right then and there.

Q: Could you tell me about how you got through your diagnosis and treatment?

A: When I found out in October … I stood before my congregation, and this is what I told them. I said ‘I don’t know what’s about to happen, I’ve never been here before, I’ve never experienced it before, so I don’t know what’s going to happen, but one thing I do (know), what I can assure you without any reservation and doubt is that I’m going to trust God through this whole thing. No matter how it turns out to be, I’m still going to trust God because if he’s brought me this far, I don’t think he’s going to leave me now. … Understand, too, that This may be a test for you also. While I’m absent, God may want to see what you’re going to do and how you’re going to carry on the church while I’m absent.’

Now people are saying, they have their opinions, but a lot of my members and other people in the city, they said God not only used me, showed me some things in my life but probably used me as an example of what God can do. … That could be true, but I know what I experienced. I’ve been, Lord knows, more enlightened, life became even more serious, I understood so much more how having faith and trusting in God is not just a Sunday morning feeling, but it’s an every day, your whole life experience because I don’t have to be here today, He could’ve taken my life through this cancer stuff, but He chose to heal me and to show others that if you trust in Him. I wanted to show my congregation because I love them so much, and I wanted to show them that my preaching was genuine. We stand and say OK you trust God, stand on the promise of his word. That was an excellent time not only to tell them that but to show them in my life. When they also experienced what I went through, it was pretty difficult. I had several people after the fact come up to me and say, “We didn’t think you were going to make it.” I’m saying wow, how did I look … but for people to say that … to tell me we didn’t think you were going to make it, then they see what God had brought me from. I’m two years in and even now, people say man you look good, man you look healthy. The only thing I can say is praise the Lord because I had nothing to do with this. Even other ministers said God used (me) to show other people how good He is. … It’s a two-fold thing; He showed me that I have to continue to depend on Him and to show other people if you trust Him, He’ll take care of you, whatever His will is for you. Either way you’ll end up good, if you trust in him. … The people who really, really I guess was besides God that brought me through this was my wife and my kids, and my girls have learned tremendously. As I was recovering, I kept giving them stories, true stories. I said see how people will do you, even when people who you didn’t think knew you, will come and support you.

I told my kids and I tell them today … no matter what you do in life, always, always treat people right because it always will come back to you. No matter how they treat you, you treat them, always treat them right.

… When you have the love for people, when you share your life with them, you meet a need, that’ll come back to you because the scriptures are true. Love your neighbors as you love yourself. Through them God will bless you. They really saw that from 2017 up to now and how people came in and blessed us tremendously.

Q: Could you tell me what the word “faith” means to you?

A: I guess I’m going to have to get in that pastor mode. To me it means life, it means security eternal, it means protection. I think I said provision. What I know now about God and asking us to believe in Him and walk with Him, His son and be guided by the spirit of God and taught by the spirit, I’m happy. I’ve said this often, I don’t see how people make it without Him. I do but then again I don’t. He’s so awesome. Once you surrender your life to Him and become saved and see and you see all that he is doing in life, even when you fall short, and we will fall short, He’s still present, He’s still doing things. True enough, He’ll chastise his children, but at the same time He’ll continue to be a blessing. That’s awesome to me. I wouldn’t tell no one different. I don’t care what their situation was, I wouldn’t tell them anything different. I would tell them Jesus is the answer in a simple way and try to show it.

I think 2017 up to now was a great example for people who knew me and even people who didn’t know me but began to know because of the talk of the town. I hope that my experience, don’t get me wrong, I know I’m not the only one, but in my personal experience and being an example for others, I hope that led them to come to Him or at least investigate. T Psalm says, “oh come and see how great God is.” If they come see and get a taste of it, if they taste it, they’ll be hooked, I don’t think they’ll want anything else.

St. John’s is located at 1018 Wilson St. in El Dorado. Dobson said all are welcome to investigate, participate and join.