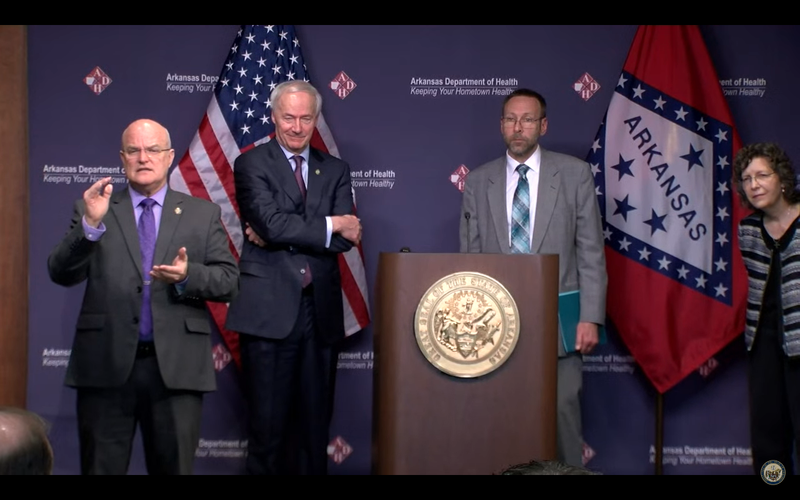 Union County Judge Mike Loftin announced via Facebook Tuesday that there are three positive cases of coronavirus (COVID-19) in the county.

“I understand it is an inconvenience to distance yourself and stay at home but I thank you for your sacrifice,” Loftin said in the post. “If we all work together and continue to stay home and distance ourselves as much as possible, hopefully we can get through this with a minimum number of positive cases in Union County.”

Monday night, Parkers Chapel High School announced someone in the district was confirmed with COVID-19, following an announcement from South Arkansas Medical Association (SAMA) Monday about a second case confirmed in the county. The first positive case was reported by the Salvation Army Sunday.

All organizations said the person with the virus is in quarantine and those who came into contact with each person have been notified, and CDC and Arkansas Health Department guidelines are being followed.

Alexandria Bennett, director of business development for the Medical Center of South Arkansas, said in an email that testing for COVID-19 is currently taking place only for those with a doctor’s referral, noting the overwhelming number of tests currently being received for processing by the ADH and commercial testing labs. She said testing priorities laid out by the state are for those with high risk factors that are exhibiting symptoms of COVID-19, which include fever with cough, shortness of breath and extended exposure to someone with a confirmed case of the virus or who has traveled from or in an area with a high concentration of confirmed cases.

“We are taking proactive steps to prepare for the protection of our patients, our caregivers and the community, and monitoring ongoing updates from the CDC,” Bennett said. “We understand the sensitivity at this time and want to reassure the community that we remain alert and ready to provide care if necessary.”

She encouraged Union County residents to practice social distancing and noted that actions such as hand washing, covering coughs and sneezes, avoiding touching one’s face, regularly cleaning and disinfecting surfaces and staying home when one is feeling sick are included in those guidelines.

Tammy McCall, administrator with the Union County Health Unit, said there is no testing at the Health Unit for the coronavirus. She said those that are feeling symptomatic should quarantine themselves, call their primary care physician and see what they advise.

Smith-Creer also reminded people that the city is not disconnecting any utilities.

“There are uncertain, unprecedented times right now, but we’re doing this together,” Smith-Creer said during the Facebook live.

She asked people to remember to use personal protective gear (PPE) like masks and gloves if they do need to go out in public. Smith-Creer also said the community should be cautious and to follow the guidelines set by the CDC and ADH, like washing hands, social distancing and not touching faces.

“We feel very confident that people are obeying social distancing, and with nonessential businesses shut down, we feel like we’re doing what we need to be doing,” she said. “We want to continue doing things in line with what the governor is saying.”

Smith said one death was a person in their 50s and the other was greater than 80. Neither, he said, were from nursing homes and both were from central Arkansas.

The Arkansas Democrat-Gazette reported Tuesday morning that a 91-year-old man from Cleburne County died from COVID-19, the first known death in the state. The man’s death was confirmed by a deputy Faulkner County coroner.

According to the Democrat-Gazette, though, it was unclear if the man had any connections to the Greer Ferry First Assembly of God, a church in Cleburne County that is reportedly connected to at least 34 COVID-19 cases.

Smith and Hutchinson also announced that there are 218 positive cases in the state, an increase of 44 from Monday’s briefing, and 10 people have recovered.

He said for the first time, there are more positive results coming from commercial labs than from the Arkansas Department of Health.

The Democrat-Gazette reported late Tuesday afternoon that University of Arkansas for Medical Science officials weren’t sure if they would be able to process the number of coronavirus tests per day they were expecting due to a shortage of reaents, or chemicals used to perform the test.

According to the report, a manufacturer that called UAMS said it could deliver reagents to run 60 tests Tuesday, although that’s less than what the campus ordered. UAMS also developed an in-house test that is expected to launch this week, and reagants are available to execute that test.

During the conference, Smith said testing expanded significantly since the first cases were reported in state, and across the nation, and expected a bigger increase with UAMS’s resources.

He said the Department of Health is able to do perform about 100 tests a day and that would increase to 200 with UAMS.

“Honor their lives in a way that doesn’t increase the spread of COVID-19,” Smith said.

He also said there has been more evidence that smoking increases the risk factor for symptoms.

“This is a good time to consider quitting,” he said. “(It’s a) great time to become the healthiest version of themselves because it gives them the best chance to be healthy and survive.”

She said she knows it can be hard, especially for young adults, to self-isolate from the people they care about, but if they really care about them, they will keep their distance.

“If we’re taking good care of ourselves, we’re helping to take care of our families by not bringing this virus home or our families,” Dillaha said. “We as a community need to be mindful and encourage each other to stay in touch, not be too isolated and carry on that social distancing practices.”

Tuesday morning President Donald Trump held a press conference and said he thinks things will be back to normal by Easter. A reporter asked Hutchinson for his thoughts.

“The president gives hope and he’s speaking in a hopeful way,” he said. “Do I think that’s going to happen? As I’ve indicated before, we’re still on the lower end of this upswing and I think we’re going to see more cases and more disruption in the near future.”

Hutchinson and Smith said Arkansas has seen a delayed impact from the virus and that it’s been more of a slow climb.

Although that could mean a slow descension, Smith said it’s a good thing.

“That means the peak number of people will be lower (in Arkansas than) if it were in a big, big city,” Smith said. “Return to normal commercial activity may be later than other parts of the country.”

Hutchinson also said the state received 24 pallets of personal protective equipment and its second shipment of personal protective equipment (PPE) from the National Strategic Stockpile. He also said an order placed through the University of Arkansas for Medical Services should arrive this weekend, which would help with resources for about 60 days at the current usage rate.

He also said he’s hoping for a special session Thursday for the General Assembly to discuss the budget and to continue essential state government activity.

Caitlan Butler contributed to this report.