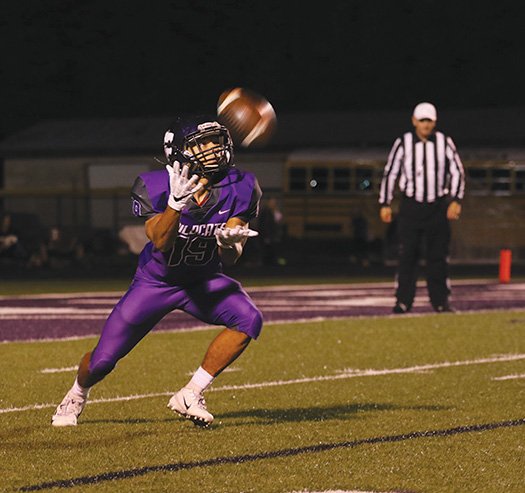 Siandhara Bonnet/News-Times El Dorado's Devunte Kidd gets ready to receive a punt during a game against Benton in the 2019 season. Also a standout in track, Kidd is the two-time defending state champion in the long jump, but he may not get the chance for a three-peat with competition halted due to concerns over the coronavirus.

He might not get to go for a three-peat.

The senior sprinter joins the other spring sport athletes on the sidelines as they wait to see if their sport returns.

The Wildcats competed once this season, finishing second in the Doc Walker Hog Relays at Texarkana.

In that meet, Kidd finished second in both the 100 and 200, coming off an injury that cost him the second half of his senior football season.

“I had, for a second time, a meniscus tear and I played the first half of the season and ended up getting hurt in the Benton game and I didn’t play the rest of the season,” Kidd said.

Part of one of the state’s fastest receiver combinations alongside Steven Tollette, Kidd had 33 receptions for 482 yards and three touchdowns and 12 rushes for 99 yards in six games.

Despite his gridiron prowess, Kidd’s primary sport has always been track and field.

The Wildcats, with the addition of freshman Deandra Burns and the return of athletes like Kidd and Neecko Davis, El Dorado could field one of its better boys’ track teams in recent memory.

In Texarkana, Kidd, along with Davis, P.J. Dinkins and Burns, took first place in the 4x100 relay.

“Well this was going to be a good season for El Dorado’s track team this year,” he said.

“We were improving in every event. For most of them, it’s their first year but they’re doing good.

“They surprised me, showed me they have what it takes to be there in that spot on the team because it’s not easy to be on the track team.”

Kidd said he’s trying to stay positive and hope for the best.

He would like to get back on the track for a final high school season.

But he’s not feeling positive about it.

“I really have no hope at all,” he admitted. “They keep pushing everything back by the day. I hate it but it’s for the best. I don’t see us coming back to nothing at all. But no telling what’s going to happen.

“I’m not really worried about it because nothing can stop me from striving for what I want or want to be in life. I’m going to still train no matter what’s going on.”