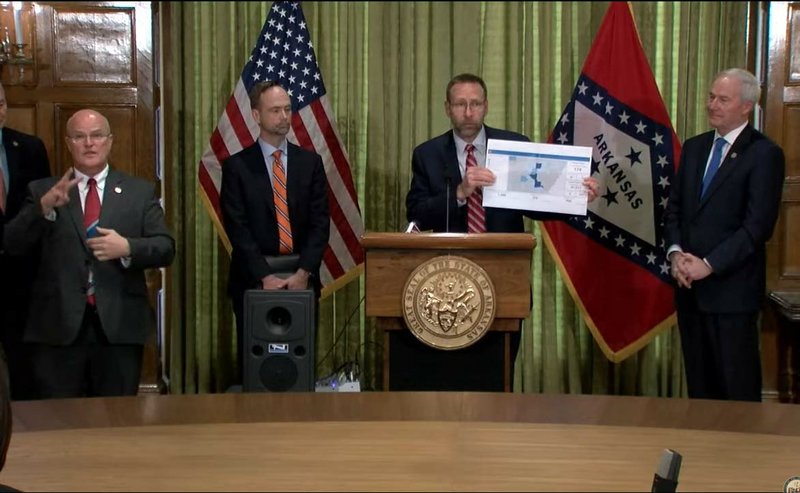 Gov. Asa Hutchinson said the financial impact of the novel coronavirus pandemic (COVID-19) will be far reaching during a press conference at the Governor’s Mansion yesterday afternoon.

Appearing with Arkansas Department of Health Secretary Dr. Nate Smith, Arkansas Surgeon General Dr. Gregory Bledsoe and Dept. of Finance and Administration Secretary Larry Walther, Hutchinson said state revenues could be down as much as $160 million between now and June 30, the last day of the fiscal year.

Revenue shortfalls are already being felt locally, with the Union County Quorum Court voting last Thursday to postpone a raise for county employees. Justices of the Peace said then that sales tax collections are likely to take a significant hit as many businesses shutter their doors and workers are laid off.

Hutchinson announced today that Arkansas will follow the federal government’s lead in postponing the deadline for individual tax filings and payment. The deadline has been pushed back to July 15.

“We all know that there’s a great need because individuals in Arkansas that are short on cash, might have lost their job, are living paycheck-to-paycheck,” Hutchinson said. “All of this strains the individual families.”

The corporate filing and payment deadline remains the same, Hutchinson said. He said the effect of the change will be twofold: Arkansans will have additional time to prepare their taxes and confusion will be eliminated since federal and state taxes will be due on the same day.

However, the change for taxpayers will increase the state’s revenue shortfall: Hutchinson said the reduction in revenues could reach as high as $353 million over the next three months as a result of the postponement.

“I’ll remind everyone that we’re not the federal government; we can’t print money and we have to balance the budget every year,” he said.

He said in light of the shortfall, the state’s General Assembly has called a special fiscal session to address the budget hole. The state currently has $173 million in unallocated surplus funds that can be utilized, Hutchinson said.

According to a report from the Arkansas Democrat-Gazette, Arkansas has a long-term reserve fund totalling $153 million and ranks as the seventh-worst state in the country in the number of days of operating expenses the reserve fund could cover, which for Arkansas is 9.9 days. The state also has $43 million in the restricted reserve fund that could eventually be utilized, Walther said.

Budget categories in Arkansas are placed in one of three categories (A, B or C) based on “level of importance,” Hutchinson told the Democrat-Gazette last week, with category A items being the most important. Budget cuts will hit category C and B line items first, he said yesterday.

“It’s going to be a serious belt-tightening time for all of state budget except for those that are on the front line of the current crisis,” Hutchinson said. He noted that some reserve funds must be saved to use quickly if necessary and therefore cannot help to curb the revenue shortfall.

Walther said the remainder of cuts, $250 million, will be distributed evenly among category A items, with critical services receiving surplus dollars where necessary.

“We still need to make sure agencies have what they need to get their jobs done,” Walther said.

Walther said a revised 2021 budget will be rolled out on July 1. He said the budget could be in limbo to some degree for some time because it is currently unclear how long-lasting and far-reaching the economic downturn will be.

“Hopefully we will get some quantitative information in the next three months, because this month, March, we’re collecting revenues that were actually for February, so the impact of the virus is not in this month’s collections,” he said. “It will definitely be in the next three months, so we’ll get information about what is happening to our economy this last quarter of the fiscal year.”

Over 60% of Union County’s budget comes from sales tax revenues, JPs said Thursday. It is not clear how much local revenues will decline as a result of the pandemic.

Local workers are also already feeling the economic impact; several large retailers in El Dorado have closed their doors, the Murphy Arts District announced that 49 people had been laid off, the governor ordered barbershops and salons to close down yesterday and Hobby Lobby announced recently that the company would be cutting wages.

Hutchinson said there are not currently plans to lay off any state employees.

The governor also provided an update on personal protective equipment the state has been instructed by the federal government to procure for themselves. He complained Sunday about the difficulty states are facing when competing against each other and other countries for supplies in a global marketplace.

“We’re competing with a big universe in the marketplace,” he said during yesterday’s press conference.

The state has also ordered two million PPE units from an overseas vendor, with the first batch from that order expected to ship by the end of the week; the governor did not say exactly what equipment was purchased. Smith noted that the state has made multiple contracts to purchase PPE gear only to be undercut by other states at the point of shipping.