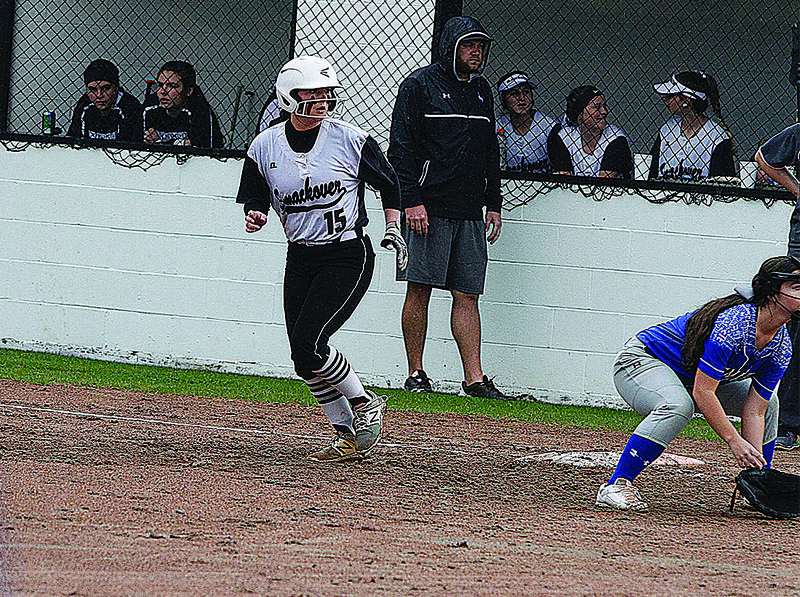 Smackover senior Lydia Pullin takes a lead off first base during action last season. The Lady Bucks are off to an 8-0 start in a season that's in doubt because of the impact of the coronavirus. - Photo by Terrance Armstard

Due to the coronavirus outbreak, the Arkansas Activities Association’s mandated dead period was extended to April 17 on Friday. None of the schools are allowed to compete or even practice during this period.

The season is in jeopardy, but Steele and his players are hopeful softball will resume at some point.

“I hope we can finish the season,” he said. “There are rumors we’ll just finish the conference games and play a district tournament and a regional tournament and state. I hope we can do that. Again, I’m just hearing it from different people. I’m not hearing it from the people we need to hear it from, the AAA. Whatever they decide will be in the best interest of the kids. I’ve been in coaching for nearly 50 years, the main thing I want is the best thing for the kids. Hopefully we can finish the season. If we can’t, I think the AAA is looking out for the best interest of the kids of the whole state.”

The Lady Bucks are 8-0 on the season and have been dominant, averaging 12.8 runs per game. They’ve outscored their opponents 103-30.

“I think we started off very good,” said Steele. “We have a lot of things we have to work on to get us to where the whole team and the coaches want us to be. But I’m confident that if we ever get back, we’ll get there. It’s just a tragedy for everyone, not just our school and our players but my three seniors and all the seniors in the state.”

Seniors Karli Goocher, Lydia Pullin and Vanessa Lofton have helped lead a squad that entered the season with high hopes. Smackover bolstered its non-conference schedule in preparation for the postseason. Already this season the Lady Bucks own wins over Class 5A Texarkana and 4A DeQueen.

Steele said the chemistry in the dugout this season is special.

“I’m just hoping we get to continue the season because I think these kids are pretty special,” said Steele. “They work hard at it. They enjoy playing. How many games were we behind this year and came from behind and won? In the years’ past, we would’ve thrown in the towel, griped and moaned and started pointing fingers at everyone else. This year, they’re picking up the slack and not pointing fingers, which is huge. It’s been a total team effort from everyone.”

It was raining Friday as Steele drove to the field. Normally, rain on a Friday would be considered a damper during softball season. It’s not a big deal, right now.

In fact, all the tarp and shovels and rakes in the world won’t get the games going again.

“That’s the thing. It’s in the Lord’s hands,” Steele said “But, I would like it because these kids, not just my kids, all the kids, they’ve put the time in and worked their butt off for the ultimate goal. Right now, our kids aren’t where we want to be, but I never thought we’d be sitting at home waiting this thing out. It’s in God’s hands. Hopefully, the AAA will make the right decision for the best interest of the kids. That’s what I’m hoping.”