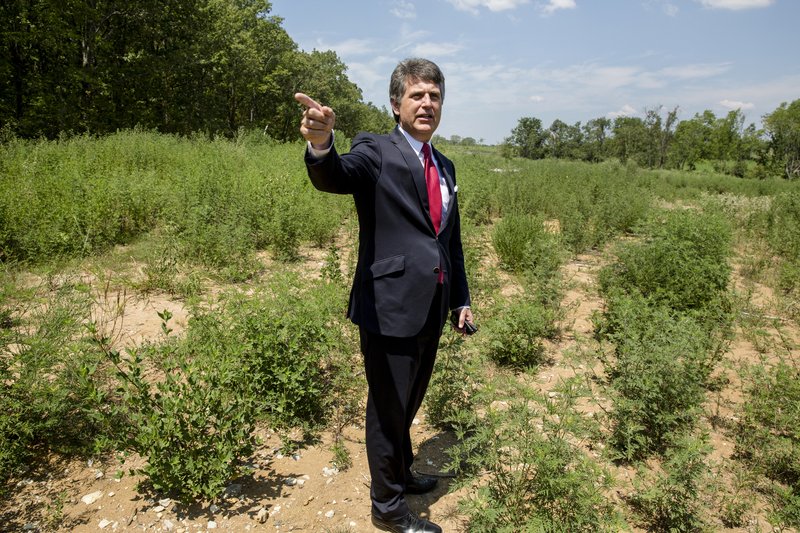 FILE - In this July 25, 2018, file photo, Stephen Bell, president and CEO of the Arkadelphia Area Chamber of Commerce, talks about what he hopes will be a new paper mill in Arkadelphia, Ark. A Chinese company has abandoned its plan to build a massive paper mill in southwestern Arkansas that had already been delayed by trade tensions. (AP Photo/Karen E. Segrave File)

LITTLE ROCK, Ark. (AP) — A Chinese company has abandoned its plan to build a massive paper mill in southwestern Arkansas that had already been delayed by trade tensions.

Sun Paper told Gov. Asa Hutchinson and economic development officials in a letter dated Sunday that it would not move forward with its plan to build a mill in Arkadelphia, about 60 miles (97 kilometers) southwest of Little Rock. The company cited “continued political friction and economic instability," and the coronavirus outbreak as reasons for walking away from the project.

“With the likelihood of the project uncertain, it is also fair to allow the state of Arkansas to use its resources for other ventures that have less uncertainty in the medium term," Andrzej Bednarski, the company's international project director, said in a letter. “At this moment, the collective uncertainties make it a better choice for both of us to abandon the project."

The letter was first reported by Talk Business and Politics.

The announcement comes after Arkadelphia officials announced that the community was marketing the 1,000-acre site planned for the mill to other potential projects. The $1.8 billion mill was announced in 2016 but has faced uncertainty since then because of trade tensions.

State Commerce Secretary Mike Preston said none of the incentives that had been announced at the time have been paid to the company and the state was looking at ways to use the now de-obligated funds for other economic development opportunities.

“It’s a big disappointment for everyone involved," Preston said in a statement. “Lots of hard work, from the local community to our state partners, went into to seeing this project succeed."

Local government had used revenue from a half-cent sales tax in Clark County to buy the mill site, which is a few miles (kilometers) south of Arkadelphia. In 2017, officials said they expected the mill to create hundreds of jobs and employ 2,000 people during its construction. State incentives included $12.5 million for site preparation and equipment, and up to $3 million in workforce training funds.