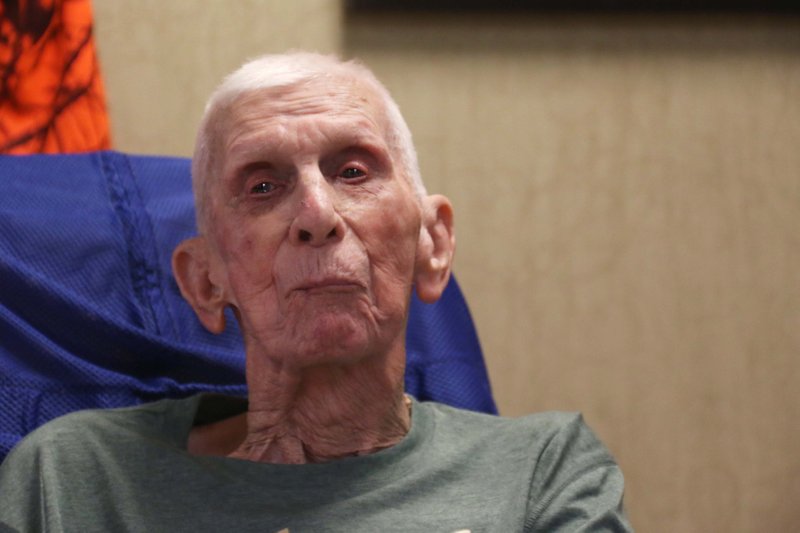 Leonard W. Aycock poses for a photo during his 101st birthday party March 9 at the Timberlane Health and Rehabilitation center. Aycock drinks black coffee and does not currently take any medicine. - Photo by Siandhara Bonnet

Healthy living and black coffee everyday could be the secret to a long life — at least, that’s what friends and family of 101-year-old Leonard W. Aycock think.

Aycock celebrated his 101st birthday with family and friends March 9 at the Timberlane Health and Rehab center, complete with cupcakes, cheese, crackers and a green “Foxy” shirt.

Aycock was born March 9, 1919, in a cabin in Lillie, Louisiana, just south of Junction City.

When he was 19, he started fox hunting — something Rockett said is what he remembers Aycock most for.

“He’s fox hunted all his life,” Rockett said. “He used to raise fox hounds and he went fox hunting all night long in different places. … He’s hunted around the country.”

Rockett said Aycock raised numerous fox hounds and could tell them apart not only by their names, but by their barks as well.

Terri Rockett and her husband Mike even recounted a time when Aycock was hit by a train coming home from a hunting trip.

Mike said Aycock would set the hounds out at 10 or 11 p.m. and let them run the foxes all night. Then in the morning, just around daylight, he would catch the foxes.

One early morning when he was returning to his farm, which was at a dead-end road just past some train tracks, Aycock was hit by a train on the passenger side of his vehicle.

“(I was trying to) outrun it,” Aycock said with a laugh.

“It pushed him a quarter of a mile down the track before it stopped,” Mike said. “That’s how he got his hip broke.”

Aycock also served in the Air Force for four and a half years during World War II, and as a teacher for about 20 years following throughout Union County.

One of his former students, Betty Wike (her maiden name), was also at the birthday party and said Aycock was always sweet.

“He was such a good teacher though, most excellent,” she said.

Aycock taught math, and his late wife taught in Norphlet. He said he retired about 10-15 years ago.

Aycock also taught Sunday School at Bethel Baptist Church near Junction City up until maybe 6-7 years ago, said David Cunningham. He said he saw Aycock’s name in church records from 1938, and that he’s the oldest living member of the church.

Aycock said he isn’t sure what he’s going to do for his 102nd birthday quite yet, but is debating between staying home or going somewhere.