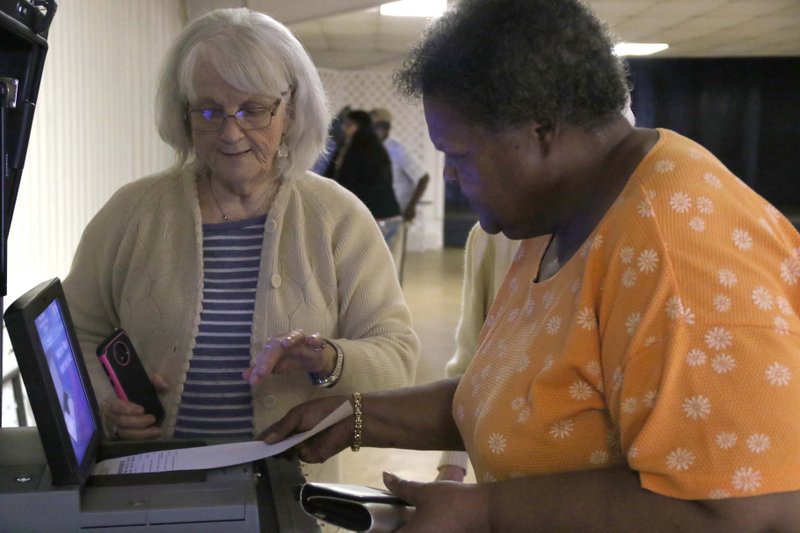 Nadine Island inserts her ballot with the help of poll worker Dorothy Bale March 3 at the Union County Fairgrounds voting center. Many poll workers and voters reported issues with the machines early on.

Heath Waldrop tried to vote at Hillsboro Church of Christ before work yesterday morning at 7:30, when polls were supposed to open. After 10 minutes of waiting, Waldrop left; by the time he did, poll workers at the site had called for help turning on their equipment.

“Several voters (about 10) stood in line when polls opened and couldn’t ever cast ballots, eventually leaving in frustration,” Waldrop said in a text message to the News-Times. “One woman said audibly that she probably wouldn’t be back.”

Some poll captains could also attest to Waldrop’s experience. Lisa Fowler, poll captain at the Union County Fairgrounds, said some people had to return to cast their ballots because of the slow start.

“It was a little chaotic because actually we did not have the full instructions of everything, but it did come around,” Fowler said. “They did get it to us in a good amount of time before we did start getting a line of people.”

Fowler also said the voting center had a few spoiled ballots since poll workers didn’t know to ask voters what party they were voting in. Without that knowledge, the presidential election wouldn’t present itself and those votes wouldn’t count.

Phillips said her office has tried reaching out to voters whose ballots were spoiled.

“We spoiled a lot of ballots,” Williams said.

Those who voted later in the day faced fewer problems, election officials and voters said.

Hope Bean, who voted at the fairgrounds around lunchtime, said it only took her six minutes to vote.

“My main focus was actually the Presidential primary,” Bean said, noting that she cast her vote in the Democratic primary for former Vice President Joe Biden.

Bean said she felt Biden was the best choice to unify the country. She also said she did not feel like she had enough information for voting.

“It was kind of figure it out on your own,” Bean said. “But I figured it out.”

Joffre Long, who voted in the Republican primary, said he was interested in local races.

Long said he felt well-informed for yesterday’s election. He did express ambivalence about his voting experience.

“It’s different, I’ll say that. I don’t know if it’s better or worse, but it’s different. Hopefully it won’t be Iowa,” he said, referring to February’s Democratic caucuses in Iowa, where results were delayed several days due to problems with a vote-reporting app.

Waldrop’s experience may resonate with others who attempted to vote when polls opened this morning. Union County Clerk Shannon Phillips said she began receiving calls from poll workers and captains at 6 a.m. yesterday.

Phillips, who said her role in elections is defined as hosting early voting, distributing absentee ballots and registering voters, said poll captains and workers began reaching out to her before polls even opened yesterday to request help turning on their voting equipment.

“They didn’t know how to turn on any of their equipment,” Phillips said. “The poll workers were never trained properly.”

Union County received new electronic voting machines, largely free of charge, from the State of Arkansas in 2018. The machines were used for the first time last year, in a school board election, where only one polling site staffed by five poll workers was open.

Phillips has encouraged the Union County Election Commission, made up of three members appointed by political parties’ county committees, to begin training poll workers and captains for the 2020 election since May 2019. Last February she noted during a meeting of the Union County Quorum Court that many people who previously worked as poll workers and captains had declined to return for the 2020 election, citing an unwillingness to learn to use the new machines.

Kermit Parks, who was the chairperson of the local Election Commission until he stepped down to act as secretary instead in January, said he and the other election commissioners, along with Phillips, were trained on the new machines last year.

However, Parks couldn’t remember a time before last month that poll workers and captains had the opportunity to train on the equipment. The voting machines were programmed for this election in January by manufacturers ESS; after they have been programmed, poll workers and captains cannot train on the equipment, Phillips said, because they must be locked until voting takes place.

“They had the opportunity all through summer, all in the early months of the fall. The equipment didn’t get programmed until early January. They waited until after the equipment was programmed to even think about holding a poll worker training or even getting their captains together,” Phillips said. “Our poll workers should not be held responsible for this.”

Parks said the fault for the lack of training lay both in the Election Commission and the poll workers themselves.

“The poll workers had problems getting their machines set up. They’re new, they didn’t pay good attention in training,” Parks said. “If some of the stations were up and running, then why could they not have all been up and running, if everyone put in equal diligence in training for the election?”

Williams said that at a meeting yesterday morning, Election Commissioners determined that more training will need to occur ahead of the November general election. Both Williams and Parks said they believe the problems observed yesterday will be able to be resolved before November.

On Thursday, several poll captains showed up to Phillips’s office for a training session with Election Commission chairwoman Williams that turned out to have been canceled via text message the day prior. The session was re-scheduled for Monday, when poll captains were due to pick up their supplies for yesterday’s election; but that meeting didn’t happen either, Williams said.

“They didn’t see terribly concerned about any of it,” Phillips said.

Williams said she agreed that poll workers did not receive enough training.

“Nobody had the opportunity to train on the machines, because they were already set up for the elections,” Williams said. “Some of them did get a little training during early voting.”

Poll captains said the lack of training was disheartening.

“(We) have no training,” Peggy New, poll captain at Wyatt Baptist Church, said last week. “None. … I come in and voted, but the lady that’s supposed to train us hasn’t trained us.”

New has been a poll worker for some 40 years, she said. She was the poll captain at the Wyatt Baptist Church voting center yesterday. In past years, she said, training on the voting machines was more extensive.

“They let us know in advance,” she said. “We had the meetings a good long time in advance and they’d have the machines there where we could go over and refresh it, after we’d used them before. We had time to learn it.”

She said on Thursday that she was concerned about the lack of the training on the new machines.

“I don’t know how to do things,” she said. “It makes me think we’re going to be haphazard.”

Sonia Parker, poll captain at the Calion Community Center voting center, had similar concerns Thursday. She’s been a poll worker for about 10 years, she said.

“They told us that what we could do, if we wanted to train, was come to early voting and see how the machines were worked,” Parker said.

Parker said she became a poll worker after her husband’s grandmother, who was also a poll worker, could no longer do the work. Asked how she thinks the lack of training will affect the election, Parker simply laughed.

Williams said that by 10 a.m. yesterday, excluding equipment problems, which persisted throughout the day, the election was running smoothly.

Equipment issues plagued voters as well. Phillips said that while some voting centers faced problems associated with a lack of poll worker training, those that attended early voting in her office had a better handle on things, but equipment failures still slowed voting some places.

“We did have several captains that came here and sat with us, and we had one or two that still had trouble, but it was equipment issues,” Phillips said. “It wasn’t them.”

Phillips said a few machines’ SD cards, the digital memories of the voting machines, had to be replaced throughout the day.

Phoebe Sellers, poll captain at Hillsboro Church of Christ, said the day started with some quirks, as Waldrop reported, but said that once those were ironed out, the voting center had smooth sailing.

“No one has complained to us,” she said. “Everyone’s been very patient. The machines are very different. We’ve never totally been with technology like this (for voting), but people have said they liked the idea.”

A handful of people who voted before polls closed at the voting center said they thought the process was pretty fast.

“It was different, but a good different,” Terri Rockett said.

On Facebook, several voters replied to a News-Times reporter’s post asking about voting experiences to say that they had positive experiences, both throughout early voting and yesterday.