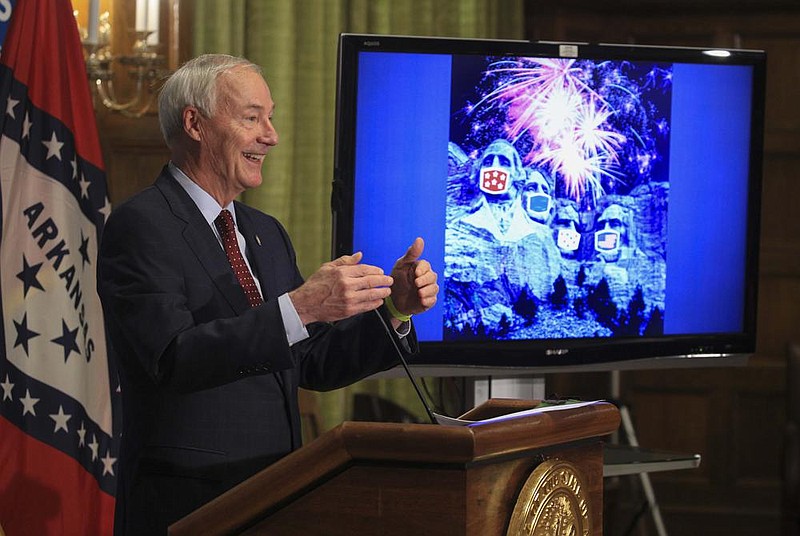 Gov. Asa Hutchinson speaks Tuesday June 30 at the state Capitol in Little Rock during his daily COVID-19 briefing about the importance of wearing a mask this holiday weekend as he shows an image of the presidents at Mt. Rushmore with wearing masks. (Arkansas Democrat-Gazette/Staton Breidenthal)

Of those, 201 were considered recovered Tuesday, up one from Monday, while 34 cases remained active. Active cases represented 13.70% of the county’s cumulative number of cases Tuesday.

The ADH reported one health care worker at Oak Ridge Nursing and Rehab having tested positive for COVID-19. On Wednesday, a spokesperson from the ADH clarified, saying that Oak Ridge does not actually have any positive cases within the facility.

At Courtyard Healthcare and Rehabilitation, the first local nursing home to report COVID-19 cases inside the facility, two residents still have active cases of the virus. In all, 35 residents there have tested positive for it; 26 have recovered, while seven have died as a result. Twenty-two workers also tested positive for the virus there, and all have since recovered.

No new local deaths were reported Tuesday; in all, 13 Union County residents have died as a result of COVID-19.

The ADH reported 16 new negative test results returning from Union County on Tuesday. The ADH has received results for 3,256 COVID-19 tests performed in Union County, with 3,008 negatives. The overall local positivity rate is 7.61%. According to the ADH, 81.9 tests are performed for every 1,000 Union County residents.

Five Arkansans died as a result of COVID-19 between Monday and Tuesday, bringing the state’s death toll to 270, indicating a state mortality rate of 1.29%. There were 290 Arkansans hospitalized due to the virus Tuesday, with 67 on ventilator support.

Gov. Asa Hutchinson announced Tuesday that the state will end the fiscal year in a better position than forecast at the start of the COVID-19 pandemic, with $560 million more than expected, which will allow the state to give more funding to public schools, including $121 million for schools around the state $42.4 million for higher education institutions, and health care, which will add $72.2 million to the Medicaid Trust Fund.

Hutchinson said he doesn’t foresee the state moving to a third phase of reopening until cases have decreased in Arkansas. He noted that contact sports will have to hold off until Phase III begins sometime in the future.

The ADH reported 311,203 total test results returned in Arkansas Tuesday, with 290,426 negatives. The overall positivity rate for the state Tuesday was 6.67%.

UPDATE 1:02 p.m.: The Arkansas Department of Health's daily congregate settings report distributed Tuesday included Oak Ridge Nursing and Rehab as having one positive worker case; however, on Wednesday, an ADH spokesperson said that there are no positive cases within Oak Ridge's facility. The story has been updated to reflect that.