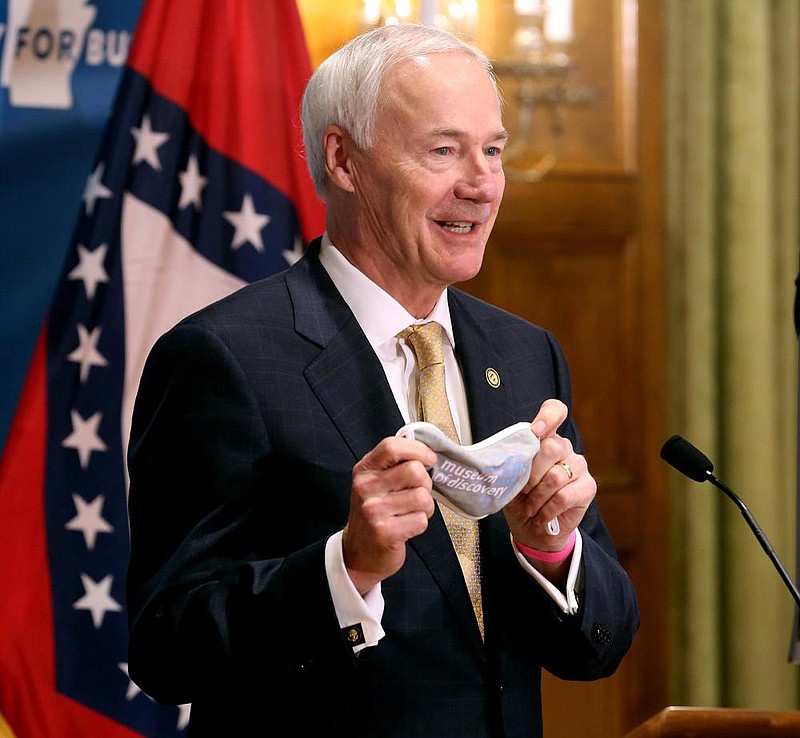 Gov. Asa Hutchinson shows off his Museum of Discovery mask he was wearing for a COVID-19 briefing on Friday, June 26, at the state Capitol in Little Rock. (Arkansas Democrat-Gazette/Thomas Metthe)

Of those, 196 were considered recovered Sunday, up five from Saturday. There remained 36 active cases locally on Sunday, representing 14.63% of cumulative cases in the county.

No new local deaths attributable to COVID-19 were reported between Saturday and Sunday; in all, 13 Union County residents have died as a result of the virus.

In an interview with the Arkansas Democrat-Gazette, ADH physician consultant for outbreak response Dr. Joel Tumlinson said the slower growth in cases over the weekend — increases in the 500s instead of the 700s, as was seen several days last week — was still high but “not as bad as it has been on some days recently.”

“I think we’re just going to have to wait and see if things are really improving, stabilizing or if they’ll go up again next week,” he said.

He encouraged Arkansas residents to take precautions against transmitting and contracting COVID-19.

“Wearing a mask, staying 6 feet away, not gathering in large groups — those kinds of things are the only real mechanisms we have (to guard against the virus),” he said.

“As people are out and about more, as groups are meeting more, as more businesses are open … there’s more opportunity for transmission,” he said. “By the end of this, if you haven’t had close contact with someone with COVID-19, you’re going to feel fortunate.”

Five Arkansans died as a result of COVID-19 between Saturday and Sunday, bringing the state’s death toll to 264, indicating a state mortality rate of 1.33%.

In an appearance on “State of the Union” Sunday, Gov. Asa Hutchinson also said he wanted to encourage residents to wear face masks in public spaces where social distancing is not possible.

“We’re encouraging mask wearing. I’ve set the example for that,” he said.

On Saturday, 278 Arkansans were hospitalized due to COVID-19, with 63 on ventilator support.