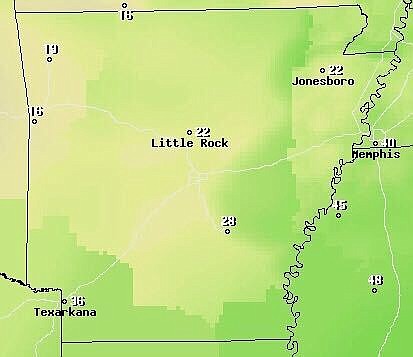 Chances for rain today were forecast Friday at about 40% for Union County. (Courtesy of the Shreveport National Weather Service)

After a week of rainy weather and cloudy skies, summertime should start settling in this weekend, said Senior Meteorologist for the Shreveport National Weather Service Jason Hamsford.

“Rain chances should start to diminish across south/central Arkansas. Our primary weather disturbance will begin to drift more into the east/southeast into, say, north/central Louisiana, especially for tomorrow,” Hamsford said Friday. “We’re settling into kind of a summertime pattern for much of next week.”

With the sunshine will come higher temperatures and humidity, Hamsford said. Union County residents can expect temperatures today to reach into the high 80s, possibly reaching 90 degrees, and by Sunday the temperature will likely settle in the low 90s.

There remains a slight chance of scattered storms, showers and thunderstorms, this afternoon, Hamsford said, and next week; however, storms next week will likely be isolated to particular areas, so not all Union County residents will necessarily see the rain.

“There’s the possibility for some locally heavy brief downpours, locally heavy winds (this weekend),” Hamsford said. “I think conditions should be drier and temperatures should be heating up (next week) as well. I know y’all have been wet, I know you’re probably a little sick and tired of all the rain. Any showers and thunderstorms next week look to be a little more isolated and hit-and-miss.”

A dust cloud originating from the Sahara Desert made its way across the Atlantic Ocean over the past week and is now heading north after reaching the Gulf Coast Thursday. Hamsford said while dust clouds traveling in the atmosphere aren’t that uncommon, to see one all the way from the Sahara make its way this far west is notable.

“A little more common occurrence we see every few years is the red dust from west Texas. That’s typically during the middle and late spring months,” he said. “Rarely do you get Saharan dust this far West.”

Hamsford said the dust clouds are caused by strong westerly winds moving at the coast of Africa picking up the dust off the Sahara and pushing the clouds across the Atlantic Ocean.

The dust cloud was difficult to see on satellite imagery on Friday, Hamsford said, likely due to the rainy weather across Arkansas and Louisiana. He said he doesn’t think local residents will see any major effects from it.

“I imagine that a lot of this stuff will be thinned out because of the showers and thunderstorms, so the concentration will be less than what it was this week. I don’t think it will really have any sense-able effects over the weekend. You may see little thin deposits of dust when the rain dries up on your vehicle, and that could be portions of that Saharan dust,” he said. “Chances are that a lot of that is probably mixed out of the air because the water droplets (from the rain) absorb the Saharan dust. It’s pretty elevated; everything is suspended in the mid- to upper level of the atmosphere.”