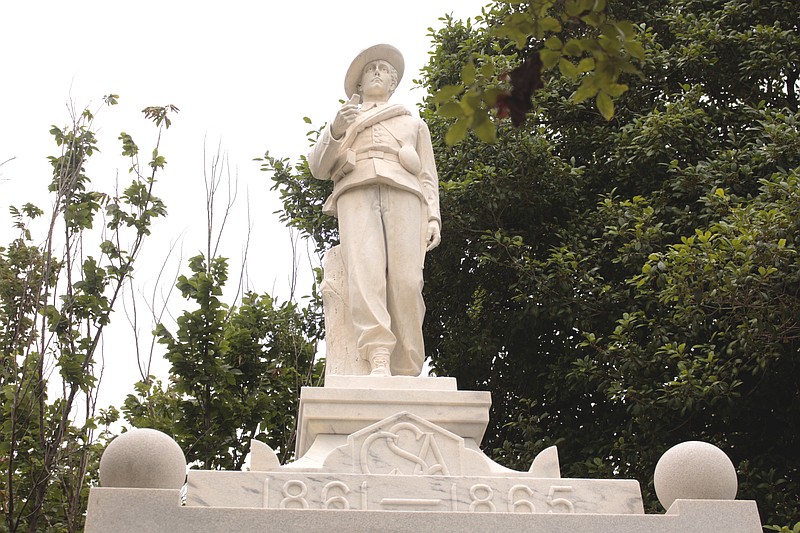 The Union County Quorum Court recently formed a committee to explore the legalities and public opinion on the potential removal or relocation of the Confederate monument at the county Courthouse at the intersection of Washington and Main streets. They met Tuesday, with an estimated 50 Union County residents in attendance.

The monument, purchased with funds raised by the Henry G. Bunn chapter of the United Daughters of the Confederacy (UDC) from 1907, when the chapter was founded, to 1910, when the monument was erected, was unveiled in a ceremony on March 21, 1910. According to the Encyclopedia of Arkansas, 70 Confederate veterans were surrounded by 700 school children during the monument’s unveiling, which was accompanied by a city band performing “Dixie” as a UDC member pulled a 20 foot by 60 foot Confederate flag to reveal the monument.

The Encyclopedia of Arkansas says the monument is unique compared to other Confederate monuments in Arkansas due to its “four-columned temple structure,” which is adorned on each corner with cannonballs and shows a Confederate soldier marching. The water feature below the temple structure used to work, as well.

The Henry G. Bunn chapter of the UDC is named for the former Chief Justice of the Arkansas Supreme Court, who served in that position from 1893 to 1904; he was also in the Confederate Army, was a state senator from 1873 to 1874, was a delegate to the state’s Constitutional Convention and was a University of Arkansas trustee from 1893 to 1901.

According to the UDC website, the goals of the organization include preserving areas made historic “by Confederate valor,” collecting materials for “a truthful history of the War between the States,” recording the history of Southern women before and after the Civil War, assisting descendants of Confederates in educational aspirations and “honoring the service” of veterans of all wars the United States has participated in.

According to the Southern Poverty Law Center, a nonprofit legal advocacy group, the UDC has been responsible for up to 450 Confederate monuments around the South since its founding in the late 1890s.

“I believe the monument needs to stay,” Tommy Goodman, of El Dorado, said. “The inscription says nothing about slavery or bondage to African Americans. It is a monument to the fallen Civil War soldiers of Union County. Nothing more. Here’s an idea, put it on the ballot come November and let the people of Union County vote on the issue.”

“Leave it alone! Are people trying to tear down monuments to the Buffalo soldiers who practiced genocide against American Indians? This whole thing is stupid,” said Richard K. McMurry, of El Dorado. “People should be smarter than this!”

“After all the money poured into the downtown area, it would be a shame if people refused to visit the square. If people refused to attend things like the Food Truck Festivals and MusicFest. If people refused to shop in the stores. If people from out of town refused to come. If invited artists refused. If ones already scheduled to visit found out and refused to come. If locals set up events to avoid that area,” said Keri Reynolds, of El Dorado. “If you think people won’t launch a campaign to avoid that area because of that statue you haven’t been paying attention. We just saw hundreds of thousands of teenagers organize for political means. Word can easily be spread to the artists and celebrities tapped to play here. Have the gumption for progress. If people don’t like that it’s gone, they can look away when they walk by, as many others have been forced to do for decades.”

“The monument is part of our history and heritage, leave it up,” said Chaplain David Baker, of El Dorado. “History is history and nothing we can do will change it. It’s all how each individual chooses to interpret it.” (Baker put emphasis on the word “chooses.”)

“Who cares about a monument? It’s part of everyone’s past, heritage or not. Either on one side or another it’s our history … This is stupid… Plain and simple. We are a Southern state with Southern roots and history. My ancestors consist of Native American Indian and Scottish. They were all done wrong. The Scots were also enslaved and tormented; and the Indians, well we all know what happened there,” said John Miller, of El Dorado. “It’s part of our history and nothing we can do will ever change that. Not by crying or moaning about it and Damn sure not by taking down any monument or statue. Leave history alone, it’s already being erased from books and teachings in the schools.”

“I think it should be removed from public property. If they want to move it somewhere privately, I couldn’t care less, but I definitely don’t think it should be on public property. I don’t want my tax dollars going to maintain it,” said Markeith Cook, of El Dorado. “I don’t like what it represents. I understand it represents different things to different people, but it has nothing but negative connotations for me.”

“My vote is to leave the monument. It is a piece of our history and that can not be changed,” said Emily Smith, of El Dorado. “We can not always bow down to current situations because that can never change history.”

Those that wish to make their thoughts on the matter known the Quorum Court’s Monument Committee should submit comments in writing by mail to the following address:

The News-Times learned more about the history of the Confederate monument after our deadline Thursday. We'll follow up on this story in the coming days.