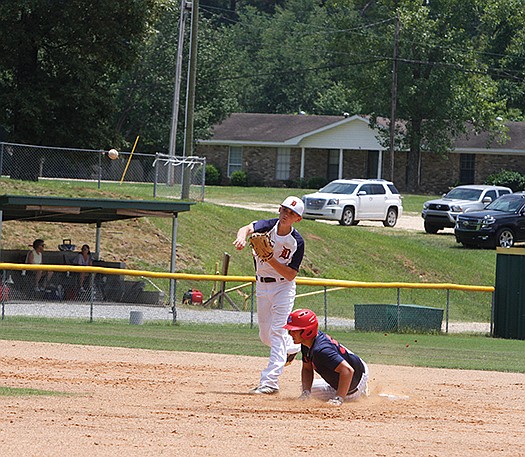 Terrance Armstard/News-Times In this file photo, El Dorado Drillers second baseman Rhett Richardson tries to turn a double play during a game at Robert McKinnon Park at Parkers Chapel during the 2019 season. The Drillers host the Monroe (La.) Nationals beginning at 5:30 p.m. at Junction City today. The El Dorado Oilers will face the Monroe (La.) Majors in the nightcap. Game time is scheduled for 7:30 p.m.

It seems rain is continuing to get in the way of the El Dorado Drillers.

After having their game in the semifinals of the Crossett Tournament rained out on Sunday, the Drillers had their doubleheader at Sheridan on Tuesday rained out.

The Drillers (7-6), who have won six of their last nine games, rallied past the Ashley County Timber Rattlers 6-5 in eight innings in their last outing.

The Drillers will be back in Union County for a showdown with the Monroe (La.) Nationals tonight at Junction City.

The Drillers will be looking to avenge an 8-4 loss to the Nationals last week in Louisiana.

In the nightcap, the El Dorado Oilers (8-2) will take on the Monroe (La.) Majors.

The Oilers have been on a roll of late, having won eight of their last nine games with their lone blemish coming at the hands of the Majors last week in Louisiana.

The Oilers are coming off of a 10-0 win over Arkansas Pulpwood in the semifinals of the Crossett Tournament.