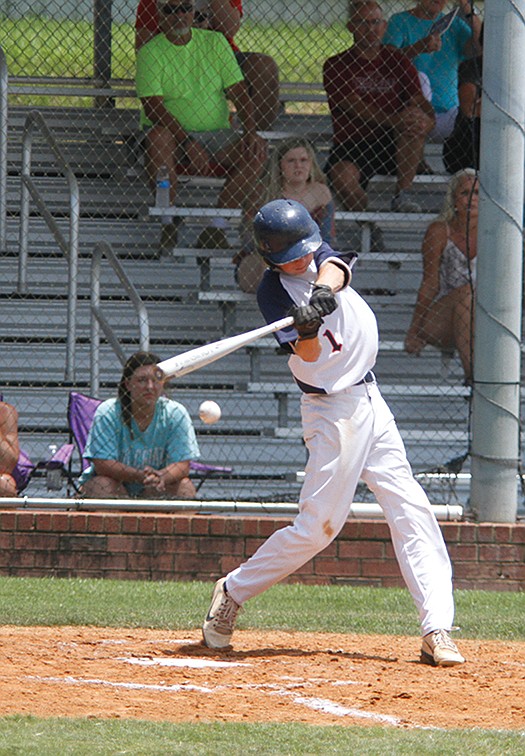 Terrance Armstard/News-Times In this file photo, Tanner McLelland of the El Dorado Drillers swings at a pitch during a game at Robert McKinnon Park at Parkers Chapel during the 2019 season.

The El Dorado Oilers wrapped up play in the Crossett Tournament Sunday by rolling to a 10-0 win over Arkansas Pulpwood.

The Oilers (8-2) were scheduled to play in the championship game, but rain forced the rest of the tournament to be postponed.

Ty Disotell fired a two-hit shutout, needing just 75 pitches to complete his gem. He walked two and struck out six.

The Oilers were methodical in pulling away, scoring two runs in the second, third and fifth innings while scoring one run in the first and three in the fourth.

Disotell helped himself by going 2-for-3 with two runs scored, one stolen base and one RBI in the win.

The Oilers gave Disotell all the run support he would need in the first.

McLelland led off with a walk and stole second and third base before scoring on a two-out single by Braden Doherty.

Chase Brumley got the rally started in the bottom of the second with a double to right-center, and Disotell followed with an opposite-field single to right to bring home Brumley to make it 2-0.

Hunter Lawrence entered the game as a courtesy runner and stole both second and third base before scoring on a sacrifice fly by Jackson Cook to give the Oilers a 3-0 edge.

In the third, Jacob Eubanks led off with a single and stole second base.

With one out, Johnson ripped a single down the left-field line to score Eubanks to make it 4-0.

After Johnson stole second, he took off for third as Gabe Richard hit a grounder to shortstop, and he was able to score on the throw to first to extend the Oilers’ lead to 5-0.

The Oilers then broke the game open with three runs in the fourth.

Disotell led off with a single to right and Lawrence entered the game as a courtesy runner.

Lawrence stole second and Cook delivered a single to right to score Lawrence to make it 6-0.

Shadarious Plummer entered the game as a courtesy runner for Cook and stole second.

Josh Saulsbury then followed with a base hit to center to score Plummer to push the lead to 7-0.

Saulsbury stole second, and McLelland followed with a base hit to left to put runners at the corners.

McLelland then stole second to put runners at second and third, and Eubanks drove in Saulsbury with a sacrifice fly to give the Oilers an 8-0 lead.

The Oilers capped their scoring in the fifth.

Saulsbury followed with a walk of his own, and McLelland ended the game via mercy rule with a two-run triple to right-center.

Cook went 1-for-1 with two RBIs, while Saulsbury was 1-for-2 with two runs scored, one stolen base and an RBI in the win.

Doherty was 1-for-2 with a walk, two stolen bases and an RBI, and Richard had an RBI to round out the Oilers’ attack.

The Oilers will host the Monroe (La.) Majors Wednesday at Junction City.