New Creations to distribute care packages to homeless this week 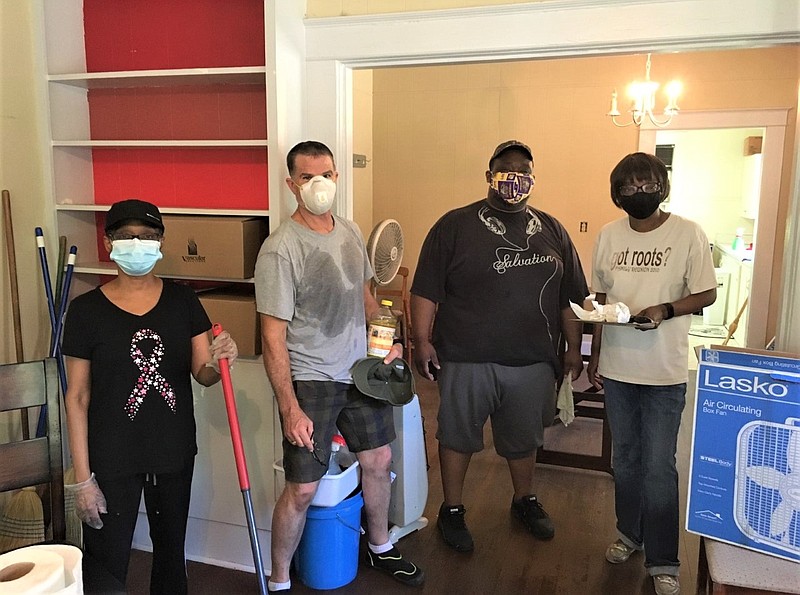 New Creations Life Center board members and volunteers clean a local residence that will be used as home base to assemble care packages that will be delivered later this week to the homeless in El Dorado. From left are Yvette Napoleon, Doug Stanton, Darwin Moore and Mary Snowden. (Contributed photo)

With the nation’s focus turned toward civil unrest and an ongoing public health emergency, advocates for people who are experiencing homelessness have said the need to serve an often overlooked and neglected population has become even more critical.

New Creations Life Center, a local nonprofit that was founded in 2010 to assist and provide services for the homeless, is stepping up its outreach efforts serve the homeless, a group that is particularly vulnerable to the coronavirus (COVID-19) and its far-reaching effects.

Starting this month, New Creations volunteers will assemble care packages containing food and personal items to deliver to the homeless twice a week in El Dorado.

The effort will get under way Tuesday, volunteer Doug Stanton said.

For a decade, New Creations has worked to help raise awareness about homelessness in El Dorado, complementing the work of other local homeless service providers, such as the Salvation Army, and drumming up support to help eradicate the problem.

Those efforts have spurred many in the community to rally around New Creations to better serve the area’s homeless population.

Stanton said NCLC will use a house on Hilton Street as a base of operations to meet and prepare the care packages. He said the house is owned by St. Mary’s Episcopal Church, who offered the space to New Life.

“This a huge and much appreciated gift from St. Mary’s,” Stanton said.

NCLC volunteers gathered at the house June 5 to clean and ready it for use.

According to 2019 statistics from the United States Interagency Council on Homelessness, the homeless population in Arkansas was 2,717 on any given day, as reported to the U.S. Department of Housing and Urban Development.

Of that total, 132 were family households, 238 were military veterans, 336 were unaccompanied young adults (ages 18-24) and 691 were people who experience chronic homelessness.

The numbers have likely climbed higher, based on trends that have shown a steady uptick in homeless rates in Arkansas since 2012.

Data USA reports that the poverty rate in El Dorado is 26.2 percent.

With job lay-offs and business closings that have resulted from COVID-19, advocates for the homeless have said the oft-repeated statistic that “millions of Americans are one paycheck away from homelessness” could affect even more people.

Stanton said it is often difficult to garner an accurate count of homeless rates in El Dorado, noting that people who experience homelessness tend to “try and remain under the radar.”

Within the past year, some local residents have said there seems to be an increase in the homeless population in the city.

“We aren’t sure how many homeless persons we will locate initially,” Stanton said, referring to the care-package project.

He said NCLC will work to help keep the homeless population as safe as possible during the COVID-19 pandemic, adding that outreach efforts, such as the care packages, and community support are helping to move the nonprofit organization closer to its ultimate goal of opening and operating a shelter/transitional housing space for the homeless in El Dorado.