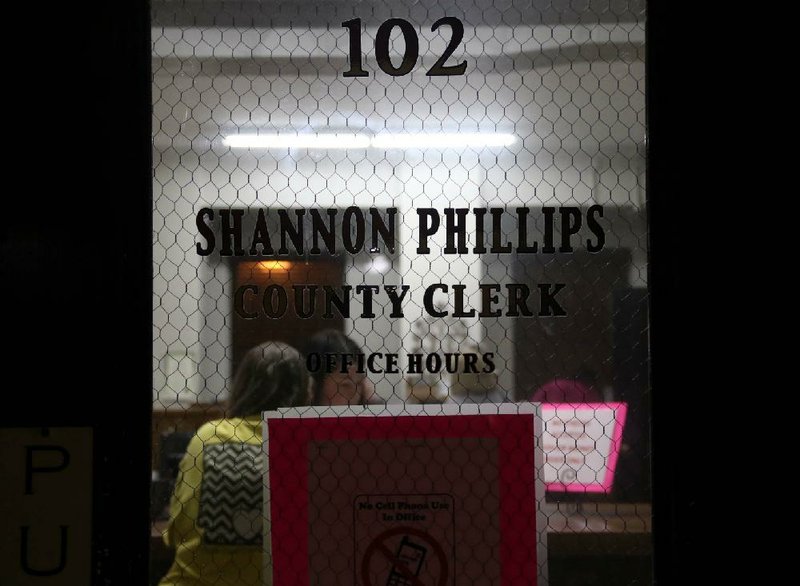 A look inside Union County Clerk Shannon Phillips’s office as primary results come in on March 3, Super Tuesday. Phillips is working to prepare for the general election in November amid the ongoing COVID-19 pandemic. (Siandhara Bonnet/News-Times)

Though General Election Day is months away, preparations are already under way, having started months in advance.

For the Union County Clerk’s Office, those already meticulous preparations have become a bit more intricate because of the the coronavirus (COVID-19) pandemic.

County Clerk Shannon Phillips said her office is taking extra steps to make sure that Nov. 3 elections run smoothly and to ensure the health and safety of the voting public, poll workers and her staff.

Phillips said she has received confirmation from state officials that elections must go on as planned and counties have to offer a vote-in-person option with some modifications and safety guidelines that were not required during the March 3 preferential primaries, just before a public health emergency was declared because of COVID-19.

The voting process for the General Election will change as Union County, the state and the nation continue to work to stem the spread of the virus.

“We’re going to have to honor the 6-foot social distancing requirement and I’ve talked to (Union County Judge Mike Loftin) and the chairman (Barbara Williams) of the (Union County Election Commission) about holding early voting at another location,” Phillips said.

Early voting, which begins Oct. 19, is typically held in the county clerk’s office but Phillips said the space in her office is not large enough to accommodate social distancing guidelines without creating exceptionally long lines and wait times.

“You have to have a secure site and you have to have a site. We’re looking at having early voting somewhere other than the (Union County Courthouse),” she said. “The (voting) machines are going to have to be 6 feet apart and there’s not very much room in our office. We have talked about the lobby of the courthouse and moving the machines every day for early voting.”

Phillips said she has kept close, constant contact with other county clerks around the state for workable ideas and suggestions, noting that she learned that many county clerks have already moved early voting sites from their offices in their respective counties.

She said the state’s county clerks are part of a feed that includes their legal team and the Arkansas Secretary of State’s office.

“We’ve been asking a lot of questions to get some guidance because this is new for everyone. Sharing what you’ve done and what has worked for you among county clerks is a useful tool,” Phillips said.

“If they take early voting out of the clerk’s office, it’s up to the election commission but we have asked to be a part of it,” she said. “Early voting is different. We don’t have to go through the same procedures that they have to go through on Election Day. We’ve got clerks that are ready to jump in and assist with this.”

On Election Day, registered voters in Union County may vote in one of 19 vote centers across the county.

“Every location is a vote center, so if you’re driving through Strong, you can stop and vote, even if you live in Parkers Chapel, so that’s wonderful,” Phillips reminded residents.

The transition to vote centers from area-specific polling sites went into effect in the county during the primaries in March.

Phillips said her office is also working to smooth out glitches and technical difficulties that were reported with new electronic voting equipment during the primaries.

She said the majority of the issues were a result of human error and she said training with poll captains is expected to begin this summer in preparation for the General Election.

“During the primary election, there were some difficulties because there was not a lot of good training done on the new equipment. Nobody had hands-on training on the equipment,” Phillips said.

“I’ve been talking to the election commission chairman to find an environment where everyone can spread out and do some hands-on work with the equipment so everyone can be comfortable with it,” she continued.

She said some workers in her office who have been trained on the equipment will assist with training poll captains.

Phillips said Loftin has purchased additional equipment to help prevent issues that occurred with the voting equipment in March.

For instance, she said additional card readers have been purchased for electronic poll books so that each voting center will have backups if needed.

With COVID-19 still a health risk and new cases cropping up, Phillips said she anticipates that many voters will choose to vote with absentee ballots for the November election.

The absentee voting process begins 45 days prior to the Nov. 3 election, she said, explaining that residents may begin requesting absentee ballots at that time.

Phillips encouraged county residents to start calling her office now to update and/or correct their home addresses. She said problems are still occurring with county residents whose addresses have changed due to recent revisions to the county’s 911 grid.

“Don’t wait. Now is a good time to call and make sure your address is updated so you can get anything that we mail out. Even if you’ve moved, we put your old address in the system and it doesn’t affect the district that it’s set to,” Phillips said.

She noted that absentee ballots will still come out of the county clerk’s office.

Phillips said her office no longer receives pre-printed voting ballots, noting that the ballots were expensive and it was often difficult to pinpoint the right amount of ballots that were needed.

County clerks throughout the state have purchased equipment that securely prints out ballots “one by one”, Phillips said.

She said the information is stored on a secure laptop computer and printer that are not accessible by Wi-Fi.

Phillips said she hopes conditions such as COVID-19 will not discourage residents from voting and voting early in November.

“I think it’s going to be hard this year and I think it’s going to be a little slower because of social distancing and lines will be longer than we’re used to,” she said. “But the new equipment is fast and if we’re moved to a new site where we can spread out with quite a few machines, I think we’ll have a successful election because early voting is what people like to do now.”

“We want this to work. We want people to come out and vote, so we’re going to try to make it as accommodating as we can and as safe as we can for everybody,” Phillips said.