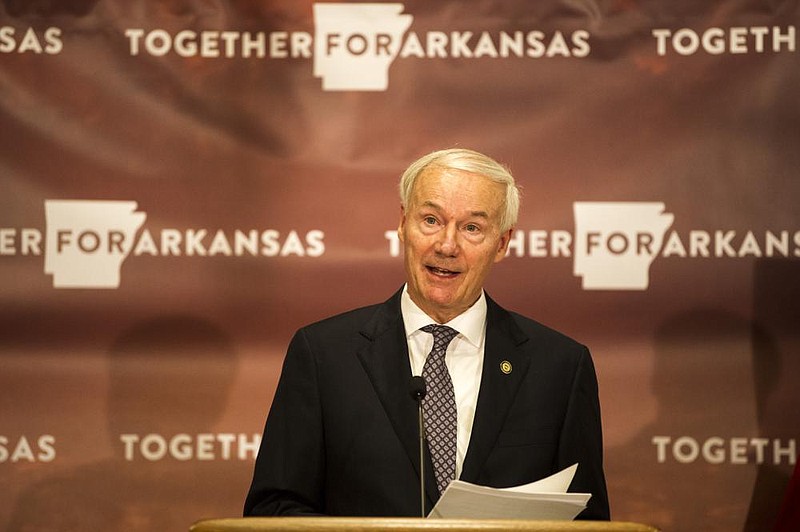 Governor Hutchinson addresses the media as he delivers a daily address on Arkansas’ response to COVID-19 on Friday, July 31. (Arkansas Democrat-Gazette / Stephen Swofford)

Governor Asa Hutchinson reported an increase of 29 new confirmed COVID-19 cases in Union County Friday; however, according to the Arkansas Department of Health’s COVID-19 dashboard, there had been 32 new cases identified in the county since Thursday, bringing the cumulative number of cases identified locally to 428 on Friday.

During each day’s COVID-19 update, Hutchinson lists the Arkansas counties where COVID-19 cases have increased by more than 20. On Friday, 11 counties saw such case growth, Hutchinson said. He said Union and Crittenden were sixth in the list of counties with 20 or more new cases reported, but based on the list of counties he provided and the number of cases reported by the ADH, Union County would actually rank fifth.

Of the 428 cases in the county reported by the ADH on Friday, 334 were considered recovered, up six from Thursday. Active cases jumped above 70 for the first time to 78, according to the ADH, representing an increase of 26 from Thursday and 18.22% of the county’s cumulative number of cases. Friday’s increase represents the largest one-day increase in COVID-19 cases the county has seen yet, as well as a new record in the number of active cases.

No changes were reported in any of the congregate living facilities in the county where COVID-19 cases have been identified. An ADH spokesperson said a decrease in two worker cases at Timberlane Health and Rehab noted Thursday was due to a previous over-count of the number of workers there who have tested positive; she noted that the data in the ADH’s congregate settings reports produced each week day is provisional.

The Arkansas Center for Health Improvement released updated city-level COVID-19 data again this week. The data is recent as of July 27, which was Monday. Only cities where 10 or more cases had been identified by Monday are listed, and the ACHI also included the number of active cases cities had Monday if they met the 10-case threshold in active cases.

No new local deaths attributable to COVID-19 were reported Friday. Sixteen Union County residents have died as a result of the virus, eight of whom resided in nursing homes in the county.

He also reported the deaths resulting from COVID-19 of an additional 11 Arkansans, bringing the state’s death toll to 453, indicating a state COVID mortality rate of 1.06%. There was a net increase of three Arkansans who were hospitalized due to the virus Friday making 507 total and a net decrease of one state resident on ventilator support making 100 ventilated in all.