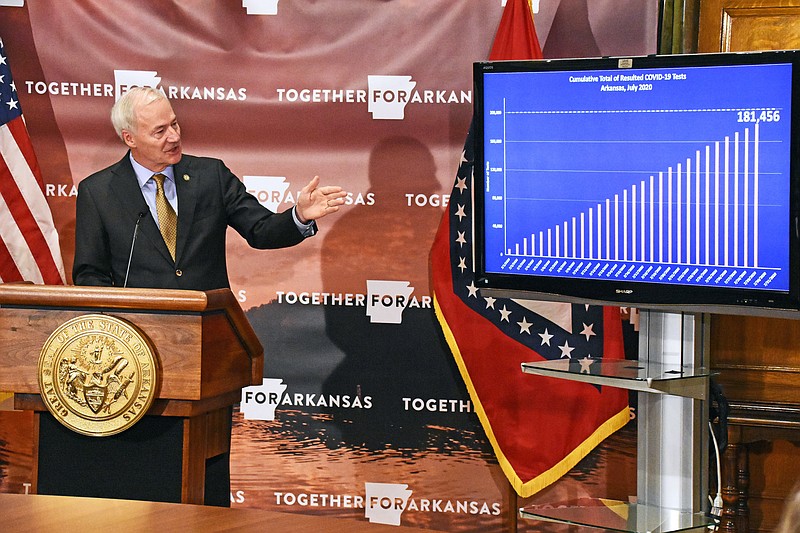 Gov. Asa Hutchinson points to a chart showing that 181,456 COVID-19 tests have been performed so far in July during a press briefing on COVID-19 held at the State Capitol in Little Rock on Thursday, July 30. (Staci Vandagriff/Arkansas Democrat-Gazette)

Of those, 328 were considered recovered Thursday, an increase of eight from Wednesday’s number of local recoveries. There were 52 cases active on Thursday, up nine from Wednesday and representing 13.13% of the cumulative case total in Union County.

Two worker cases that were previously reported at Timberlane Health and Rehab were not included in a congregate settings report produced each week day by the ADH; instead, six total worker cases are listed, with four of the workers considered recovered now, along with one resident who tested positive and died as a result of the virus.

No other changes were reported in any of the congregate settings where COVID-19 has been identified in Union County, which include Community Living Arrangements, where one worker case remains active; Courtyard Healthcare Rehabilitation, where seven residents died as a result of the virus and 28 residents and 22 workers have recovered from the virus; and Advanced Health and Rehab of Union County, where two workers have recovered from the virus.

No new local deaths attributable to COVID-19 were reported Thursday. Sixteen Union County residents have died as a result of the virus.

The deaths of eight additional Arkansans resulting from COVID-19 were reported Thursday, bringing the state’s death toll to 442, indicating a state COVID mortality rate of 1.05%. At 504 total, there were four fewer Arkansans hospitalized as a result of the virus Thursday, and seven fewer on ventilator support at 101 total.