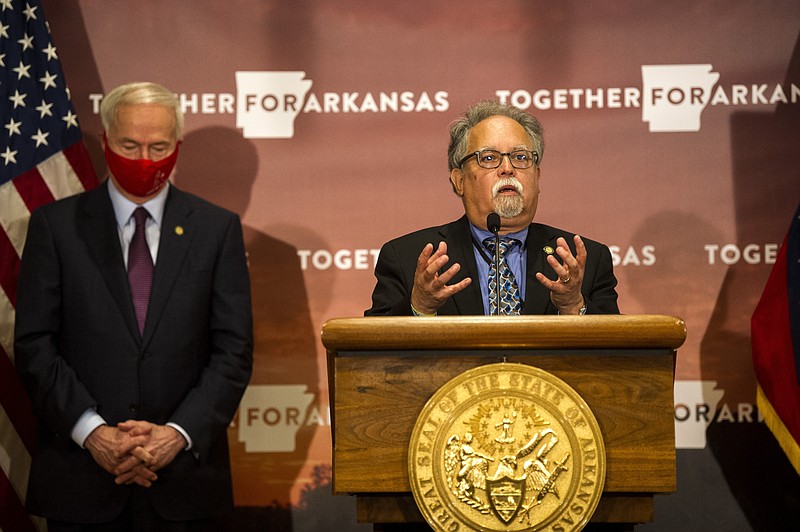 Governor Hutchinson and Dr. Jose Romero, Interim Secretary of the Arkansas Department of Health, address the media during a daily update on Arkansas’ response to COVID-19 on Tuesday, July 28. (Arkansas Democrat-Gazette / Stephen Swofford)

The Arkansas Department of Health reported three new confirmed COVID-19 cases in Union County Tuesday, bringing the cumulative number of cases identified in the county to 376.

Of those, 314 were considered recovered Tuesday, up nine from Monday. There remained 47 active cases in the county, a net decrease of six from Monday. Active cases represented 12.5% of the county’s cumulative case total Tuesday.

The Arkansas Center for Health Improvement released updated data on COVID-19 cases in municipalities in the state Tuesday. The data is recent through July 20 and includes only cities that have seen 10 or more cases. The ACHI compiled the data based on addresses provided to the ADH and population data from the United States Census Bureau.

The congregate living settings report also reported a new resident recovery at Courtyard Healthcare and Rehabilitation. All residents and workers who had the virus there were considered recovered as of Tuesday; seven residents did, however, die as a result of the virus at Courtyard earlier this year.

No new local deaths resulting from COVID-19 were added to Union County’s total Tuesday. An ADH spokesperson said the death reported at Timberlane had not yet been added to the state’s overall totals and will likely be added to the total number of deaths in Union County in the coming days. On Tuesday, the ADH reported that 15 total local residents had died as a result of the virus.

The number of COVID-19 cases identified in Arkansas grew by 734 to reach a cumulative total of 40,181 cases statewide. Tuesday was the first day the state surpassed 40,000 COVID-19 cases.

The deaths of 20 Arkansans that resulted from COVID-19 were reported Tuesday. Interim ADH Secretary Dr. Jose Romero noted that six of those had not died in the 24 hour period preceding a daily COVID-19 health update that was held at 1:30 p.m. The report of 20 deaths represents the highest one-day increase to the state’s death toll yet.

“These are not good numbers,” Governor Asa Hutchinson said.

In all, 428 Arkansans have died as a result of the virus, indicating a state COVID mortality rate of 1.06%.

Hutchinson reported that hospitalizations due to the virus increased by 12 by Tuesday, making 501 Arkansans hospitalized because of COVID-19. There were 110 Arkansans on ventilator support Tuesday, representing no change from Monday.

Hutchinson said 5,248 COVID-19 tests had been performed in the 24 hour period preceding his press conference. The ADH reported 5,015 new results reported Tuesday, indicating a one-day positivity rate for the state of 14.63% based on the numbers of new cases and results.

“We’d like to do more (testing),” Hutchinson said. “Our commercial labs are still slowing down some in terms of our production.”

He announced that the state has ordered 200 antigen test machines, which will allow health care providers to test patients at the point of care. Romero explained that PCR tests, which the state currently relies on to determine the number of cases, examine a person’s genetic material, while antigen tests look for the virus, in this case COVID-19, protein. The U.S. Centers for Disease Control considers positive PCR test results to be confirmed cases and positive antigen test results to be presumptive positive cases.

Hutchinson noted that the state plans to report results from the two different types of test results separately once the antigen tests begin to be used. The antigen tests have a 95% rate of accuracy in detecting the virus, he said.

Since the state began testing for COVID-19, there have been 489,906 results reported to the ADH, with 449,725 negatives, indicating an overall positivity rate for the state of 8.2%.

Hutchinson was asked Tuesday about resistance from some members of the Arkansas Legislature to his statewide mask mandate.

“It’s a matter of balancing the priority on public health and getting a handle of the cases and deaths we see from the virus with the independent spirit of Arkansans and the freedom they experience,” Hutchinson said. “I identify with that. I don’t like it either. But, we pull together, we work together to get over this, and by and large, I think that most Arkansans understand what we’re doing and the need for it.”