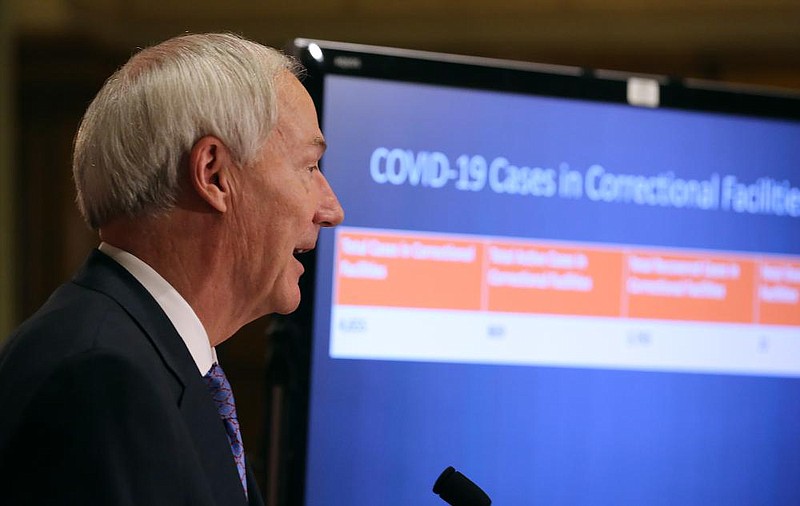 Gov. Asa Hutchinson gives a breakdown of COVID-19 cases in the state prisons during the daily COVID-19 briefing on Thursday, July 24, at the state Capitol in Little Rock. (Arkansas Democrat-Gazette/Thomas Metthe)

The Arkansas Department of Health reported eight new confirmed cases of COVID-19 in Union County Sunday, bringing the cumulative number of cases identified in the county to 369.

The number of reported recoveries in Union County increased by four Sunday to reach 300. Active COVID-19 cases in the county correspondingly increased by four from Saturday to 54, representing 14.63% of the local cumulative case total.

No new local deaths attributable to the virus were reported Sunday. Fifteen Union County residents have died as a result of COVID-19.

There were 480 Arkansans hospitalized due to COVID-19 Sunday, up one from Saturday, and 103 on ventilator support, down two from Saturday.

According to the ADH, 6,869 new tests had been reported to the department by Sunday, indicating a one-day positivity rate for the state of 9.34% based on the numbers of new tests and cases reported. Since the state began testing for COVID-19, 470,267 tests have been reported to the ADH, with 438,644 negatives, indicating an overall positivity rate for the state of 8.21%.