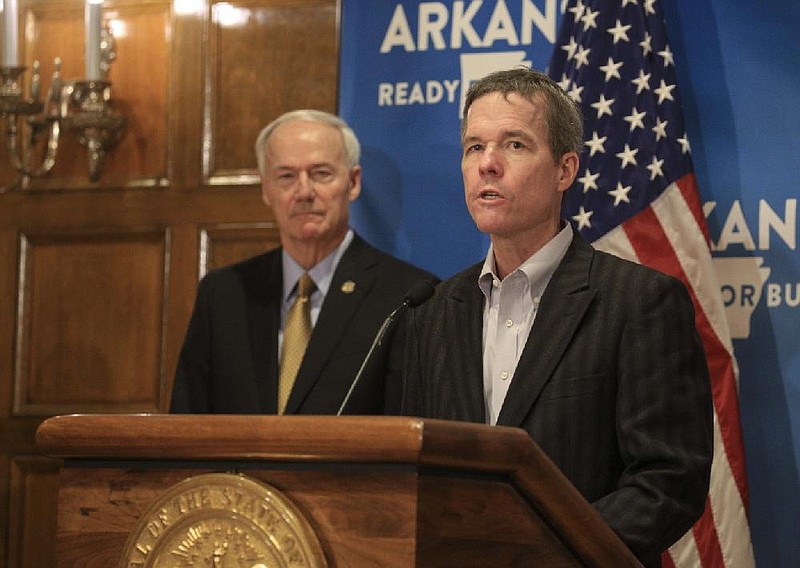 Dr. Cam Patterson, right, chancellor of the University of Arkansas for Medical Sciences, along with Gov. Asa Hutchinson speaks Friday May 8 during the daily COVID-19 briefing at the state Capitol in Little Rock. (Staton Breidenthal/Arkansas Democrat-Gazette)

The Arkansas Department of Health reported one new case of COVID-19 in Union County Sunday, bringing the cumulative number of cases in the county to 274.

One local COVID-19 recovery was logged Sunday, to make 226 county residents who have recovered from the virus. Active cases correspondingly stayed steady at 34, representing 12.40% of cumulative cases. Union and Conway counties rank 26th among the state’s 75 counties in their number of active cases.

No new deaths attributable to the virus were reported on Sunday. Fourteen Union County residents have died as a result of COVID-19. Union County and Crittendon County have both seen 14 residents die, the fifth most in any of Arkansas’ counties. Union County’s COVID mortality rate was 5.10% Sunday.

Two Arkansans died as a result of the virus between Saturday and Sunday, bringing the state’s death toll to 321, indicating a state COVID mortality rate of 1.13%. On Saturday, 411 Arkansans were hospitalized due to COVID-19, with 84 on ventilator support.

Saturday marked the largest one-day increase in cases in Arkansas, with the cumulative total climbing over 1,000. Gov. Asa Hutchinson said in a statement that he would discuss the growth on Monday.

“The record number of new cases is very concerning and may be the result of 4th of July celebrations,” Hutchinson said on Twitter. “Regardless, it is a reminder of the challenge we continue to face.”

Hutchinson and Smith have urged Arkansas residents to follow ADH recommendations to prevent the spread of the novel coronavirus, which include wearing a face mask in all indoor and outdoor settings where one is around non-household members where social distancing of at least six feet between oneself and others isn’t possible; washing one’s hands frequently and refraining from touching one’s face; and maintaining social distance in all cases.

“At some point, while we may have the capacity across the entire state, we may have the resources across the entire state, to take care of every COVID-19 infected patient, those resources are not necessarily going to be in the right place,” he said. “So as this progresses, we are going to see capacity constraints and limitations on our ability to provide care unless we effectively bend the curve soon.”

It is not unusual for the UAMS ICU to be at capacity, and in-house UAMS patients can potentially be treated in an ICU-capacity within other parts of the hospital. A spokesperson for UAMS told the Arkansas Democrat-Gazette their ICU had 22 COVID patients.

“I think the chancellor’s point was that we don’t have infinite resources,” the spokeswoman said.

Hutchinson said testing had slowed over the Fourth of July weekend last week. He said he has a goal to test 200,000 Arkansans this month; so far, 71,199 tests have been reported to the ADH.