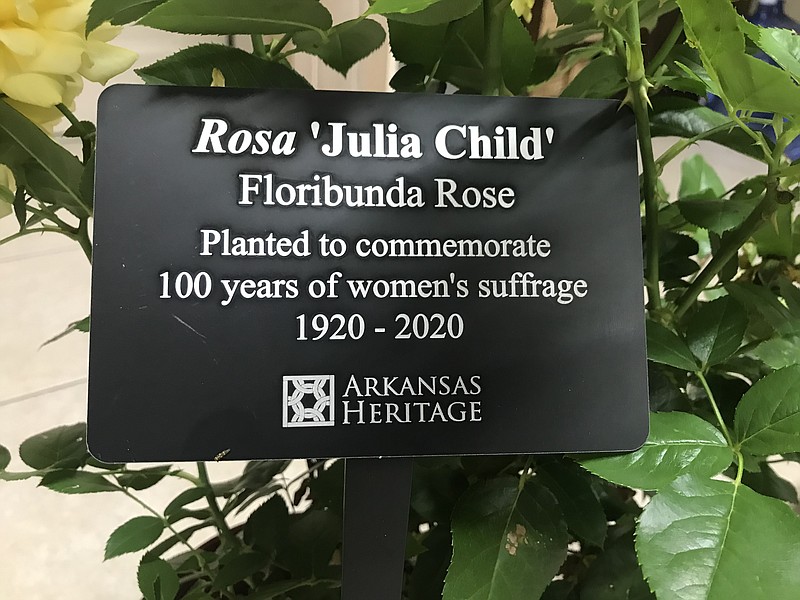 Yellow roses, such as the ‘Julia Child roses’ donated to Union County by the Arkansas Women’s Suffrage Centennial Commemoration Committee, represented support for the women’s suffrage movement at the turn of the 20th century. (Contributed)

Union County Judge Mike Loftin was recently joined by Master Gardener Charlotte Abbott to plant yellow roses donated by the Division of Arkansas Heritage, part of the Arkansas Department of Parks, Tourism and Heritage, to commemorate the centennial anniversary of the codification of the 19th Amendment to the United States Constitution. 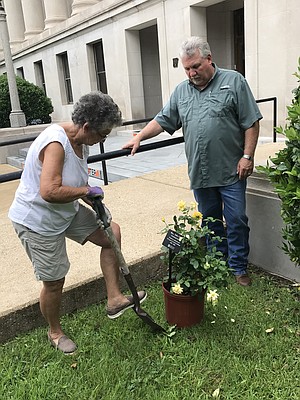 Union County Master Gardener Charlotte Abbott prepares to plant yellow roses commemorating the centennial anniversary of the passage of the 19th Amendment to the United States Constitution at the Union County Courthouse as County Judge Mike Loftin looks on. (Contributed)

Stephanie Wade, a DAH Historian and the Administrator of the Women’s Suffrage Centennial Commemoration Committee, formed in 2017 by Gov. Asa Hutchinson, said the yellow rose project is the committee’s biggest yet, and one that every county in Arkansas is involved in.

“Our committee, we really wanted to do something that wouldn’t just focus on the central part of our state, so we came up with the idea to put a yellow rose at each of the county courthouses,” Wade said. “We just thought it would be a great way to celebrate and commemorate the movement. With the help of the Attorney General’s and Secretary of State’s offices, we were able to get them distributed to each courthouse.”

Waylon Arnold, an employee in the Arkansas SOS’s office, delivered the roses a few weeks ago, a Courthouse employee said. Wade said employees in the SOS and AG’s offices travel to the 75 counties in Arkansas regularly and were glad to help out. 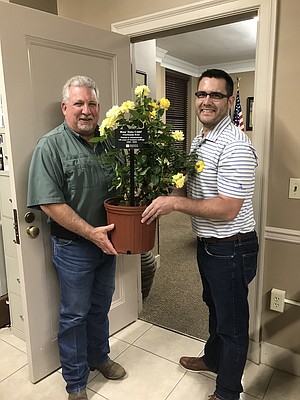 Wade said the yellow rose was a prominent symbol of support for the women’s suffrage movement near the turn of the 20th century.

“The yellow rose was a symbol of those who supported women’s suffrage. Many times people would wear them on their jackets as a symbol and sign they supported it, and the red rose was used to let people know that you were against women’s suffrage,” Wade said. “I know the last state to ratify (the 19th Amendment in order for national passage) was Tennessee. It really came down to the wire — literally one vote. The men, the legislators, would have on a yellow rose or a red rose to show what they supported, and I believe when the vote came down, Harry Burns switched his red rose to yellow.”

Arkansas was the 12th state to ratify the 19th Amendment, which states that the “right of citizens of the United States to vote shall not be denied or abridged by the United States or by any State on account of sex.” The Amendment was ratified by the Arkansas Legislature on July 28, 1919.

“In 1919, we went ahead and ratified the 19th Amendment ahead of many other states, and certainly other states in the South. Most of the states did not even ratify it until decades later,” Wade said. “It’s really neat that our state was very progressive at that time.”

Arkansas was at the forefront of the women’s suffrage movement even before the 19th Amendment came up for consideration. According to the Encyclopedia of Arkansas, women and men began organizing to advocate for women’s suffrage after the Civil War, with Miles Ledford Langley, of Clark County, moving during the state’s Constitutional Convention of 1868 for “all citizens 21 years of age, who can read and write the English language … be eligible to the elective franchise and entitled to equal political rights and privileges.”

Wade said in 1917, state Rep. John Riggs, of Garland County, introduced a bill to the Arkansas Legislature proposing to allow women to vote during primary elections.

“Which was very clever, because we were really a one-party state, so if they had the right to vote in primaries, they were voting in the general election,” Wade said. “That passed and Gov. (Charles Hillman) Brough signed off in March 1917.”

“We were the first Southern state to give voting rights like that to the women of the state,” Wade added. “That was really, really something.”

The Women’s Suffrage Centennial Commemoration Committee has been working to raise awareness and educate younger generations about the significance of women’s suffrage and the movement that helped to codify it. They’ve recorded radio spots for National Public Radio called “Suffrage in 60 Seconds” and helped to get the ball rolling on a whole area of the Little Rock River Market’s Sculpture Garden devoted to the 19th Amendment.

“It’s really just unbelievable the energy and the efforts and all the hard work it took to get to that point (where the 19th Amendment was ratified and added to the U.S. Constitution). It was 70 years in the making before they finally had the right to vote, and it’s just the most basic, fundamental right to be able to do so, and for half the population of a country not to be able to do so, it makes it really important that it happened,” Wade said. “And it’s really important that we educate generation after generation on what it took to get there.”

Marcia Barnes and Rolanda Robinson dressed in period attire at a tea held at the Arkansas Governor's Mansion kicking off the state's centennial commemoration of women's suffrage. (Contributed)

The committee planted their first rose at the Governor’s Mansion in Little Rock in July, 2019, commemorating Arkansas’ vote to ratify the 19th Amendment. They plan to commemorate the national anniversary of the 19th Amendment on Aug. 26, exactly 100 years after U.S Secretary of State Bainbridge Colby signed a proclamation codifying the Amendment’s passage after 36 states had ratified it by Aug. 18, 1920. August 26th is also known as Women’s Equality Day. 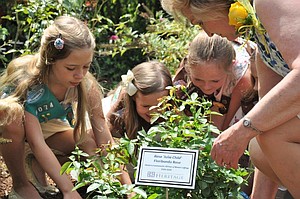 “It’s always good to have men and women being able to vote and putting forth their thoughts and ideas and who they think would be the best to represent them,” Wade said. “I can’t imagine it just being one half of the population determining everything. It’s just critical that we all get to participate in that process in order to be a democracy. I’d say before then (the 19th Amendment’s passage), it really wasn’t a democracy.”