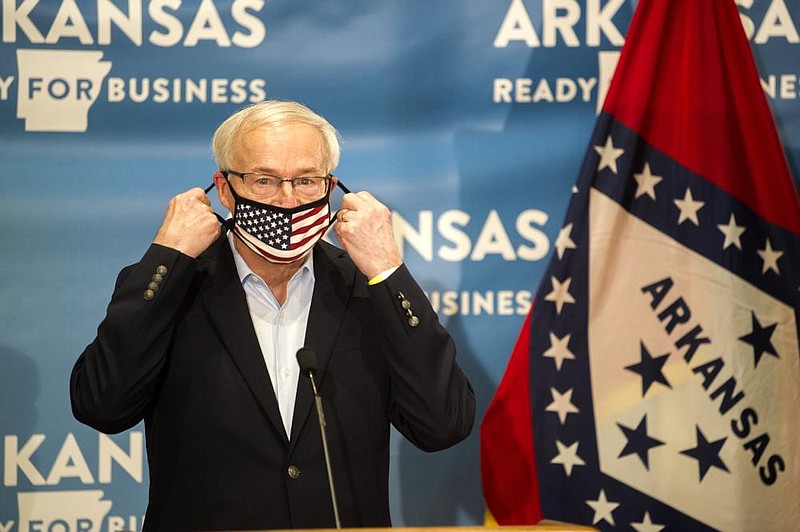 Governor Asa Hutchinson removes his face mask as he prepares to address the media during an update on Arkansas’ response to COVID-19 on Friday, July 3. (Arkansas Democrat-Gazette / Stephen Swofford)

The Arkansas Department of Health did not report any new COVID-19 cases in Union County Saturday, keeping the county’s cumulative cases total at 252, where it’s been since Friday.

Of the 252 people who have had COVID-19 locally, 214 were considered recovered on Saturday, up two from Friday. The number of active cases correspondingly dropped by two to 25, representing 9.92% of the county’s cumulative cases.

No new local deaths attributable to COVID-19 were reported Saturday; in all, 13 Union County residents have died as a result of the virus.

The ADH reported 14 new negative test results returned from Union County on Saturday. In all, 3,337 COVID-19 test results from the county have returned to the ADH, with 3,085 negatives, indicating an overall local positivity rate of 7.55%.

Five Arkansans died as a result of the virus between Friday and Saturday, bringing the state’s death toll to 286, indicating a state mortality rate of 1.23%.

Only four Arkansas counties have had more deaths resulting from the virus than Union County, which matches Crittendon County, where there are currently 146 active cases out of 768 cumulative cases and 13 deaths have occurred. The 12th and 13th deaths in Union County were reported on June 18.

The mortality rate from COVID-19 was 5.15% in Union County Saturday, down from 5.96% on June 18 due to the rise in local cases. There were 218 cumulative cases on June 18, a difference of 34 compared to Saturday. Crittendon County’s mortality rate Saturday was 1.69%.

The other six deaths were in residents that lived in the general community. They represent 3.5% of the community deaths attributable to the virus in the state.

The ADH reported 338,893 total test results returned Saturday, with 315,684 negatives, indicating an overall positivity rate for the state of 6.84%.