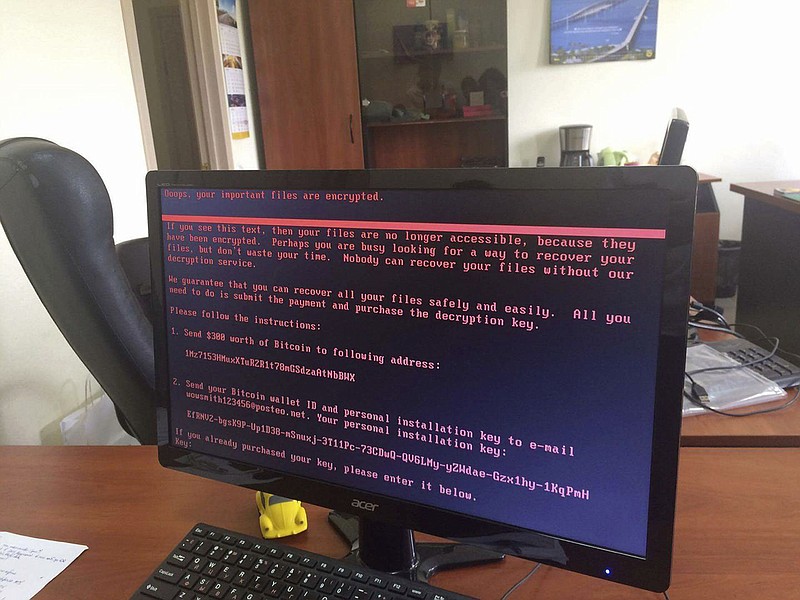 A computer screen cyberattack warning notice reportedly holding computer files to ransom, as part of a massive international cyberattack, at an office in Kiev, Ukraine, Tuesday June 27, 2017. The El Dorado Police Department was recently hit with a similar virus. (Oleg Reshetnyak via AP)

The El Dorado Police Department’s computer network is fully operational, weeks after the system was attacked by a CryptoLocker virus, EPD officials said.

Capt. Michael Leveritt issued assurances that there no data was breached as a result of the cyber attack, which occurred in early May.

Leveritt explained that the EPD computer system was hit by RobinHood malware, a bug that encrypts existing files and holds them for “ransom”, as hackers demand to be paid through Bitcoin in order to “release” the files.

The FBI is investigating the incident.

“No information was taken from us. It just locked them from being used on our network. No records were compromised. It basically locks the files and makes them useless until we pay to have them unlocked,” Leveritt said.

“Through our Internet security protocols, we were able to get rid of those encrypted files and replace them with backup files that we keep and maintain,” he continued.

Leveritt and Police Chief Kenny Hickman said no other El Dorado city departments or offices have reported such issues.

Leveritt said that when the RobinHood Ransomware infiltrated the EPD computer system, local officers learned from the FBI that it was the latest variant of the years-old malware and it had struck other large computer networks, including law enforcement agencies and other municipal government offices and private businesses, across the country.

Leveritt said he had heard about one such instance at a medical office in Fort Smith.

“At the time, it was a fairly new crytpo-virus that came out and it was fairly new to the FBI and all of the information that we had on it was forwarded to the FBI for their analysis,” Leveritt said.

“But we don’t know exactly how it infiltrated our network. It’s a huge inconvenience,” he added.

Hickman said the bug affected several individual computer work stations within the police department but it did not wipe out any essential data.

Leveritt said EPD employees first noticed a small glitch in one of the EPD’s software programs.

“When it wasn’t functioning like it was designed to is when we started looking and immediately realized that it had started migrating into our network. We were able to shut it down immediately,” he said.

The EPD’s computer system could have been functioning within a relatively short time but Leveritt said the police department meticulously evaluated and repaired the system to prevent such an event, or a worse one, from occurring again.

“If you take out the upgrades that were needed, we could have been back up and operational in two hours. But we upgraded software on our systems, replaced some servers and put in a few security measures,” he said, adding that information technicians are still working on the project.

Hickman said his computer work station was one of several that was rebuilt.

“It took us weeks to get back some of the information we had lost. It took a lot of time to rebuild,” the police chief said.

“I encourage businesses to have a good backup system with good protocols in place so not have to pay ransom but just reset the system and backup data,” Leveritt advised.