A decade of artistry 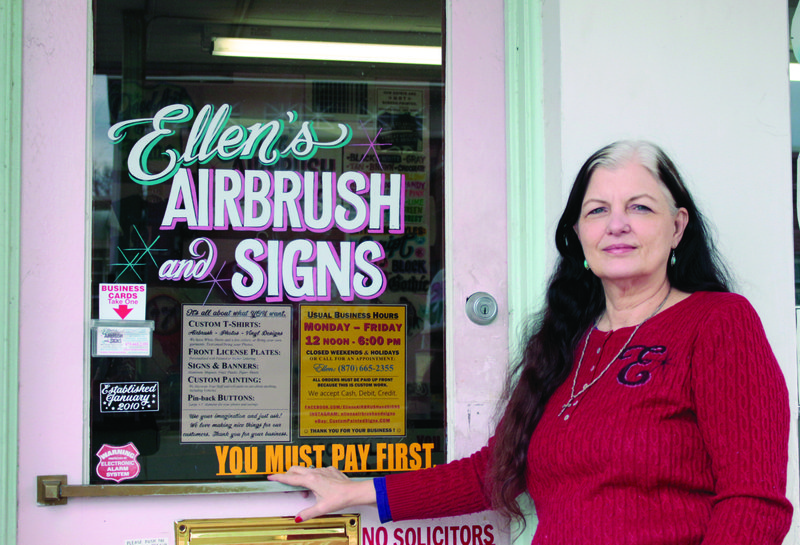 Ellen McKnight is celebrating 10 years of entrepreneurship at Ellen’s Airbrush this month.

Born in California, raised in Texas and finally settled in Arkansas — and Ellen’s Airbrush owner Ellen McKnight isn’t done yet.

McKnight is marking her tenth year in the airbrush business this month. While its been quite the journey — personal upheavals, the risk of entrepreneurship, fighting red-tape, barely getting by — she’s come out the other side resilient and as inspired as ever.

“I’m determined. I’m dedicated. I love what I do,” McKnight said. “I’m probably a workaholic.”

McKnight has always been an artist. She attended the Texas Academy of Art after high school, studying commercial art (“which is what they call graphic arts now, but back then we didn’t have computers, so it was a whole different method”) and worked at an advertising agency in Texas until she had her first child, when she became a stay-at-home mom.

Her then-husband was an ‘ad man’ too, but he eventually looked for a change, bringing the family finally to Arkansas around 1982. They eventually divorced, and McKnight made her way to Smackover, where she found her passion.

In Smackover, she met her second husband, Troy — an artist like her. He was a sign-painter with his own business (Troy’s Sign Shop), where she worked from 2005 to 2012.

Sign painting is a very specific craft, and a dying art, McKnight said. She apprenticed under her husband (then still her boyfriend) to learn it and they began working together at the shop in Smackover.

For their honeymoon, the couple traveled to Las Vegas for a five-day airbrush-painting workshop in September, 2006. It was there that McKnight started seeing signs that she’d stumbled into just the right place.

“It was great, it was like the highlight of my life,” McKnight said. “I said I’m going to learn this if it kills me.”

It wasn’t easy, though; the workshop left her crying after a few hours because of the airbrush medium’s difficulty. McKnight decided to buy a beginner’s guide to airbrush painting DVD while she was at the workshop.

“They had all these videos, and they just had the spine showing, and I said ‘OK, I need one that’s just an introduction to T-shirt lettering,’” McKnight said. “I picked it up, looked at the cover (and of course there was the ubiquitous beach) and it had a name [airbrushed onto the beach scene] and the name was Ellen! I about fell through the floor. I went ‘I must be supposed to be doing this.’”

On the last day of the workshop, her instructor said he would take suggestions for a painting he wanted to make to show them what was really possible with the airbrush medium. McKnight suggested he paint a red Corvette and he agreed, and even went so far as to add pine trees around the Corvette’s road for her found home in Arkansas.

“The other thing that let me know that I had to do it … well, there was a raffle that day and I won that shirt,” McKnight said. “It’s hung on my wall for 10 years. Those two things showed me that I was supposed to do this.”

For a while, McKnight and her husband continued working out of his shop in Smackover, now offering airbrushed goods alongside their hand-crafted signage; eventually, though, McKnight decided she wanted something of her own, and in El Dorado.

And again, things seemed to fall into place for McKnight. The next day, working at Troy’s Sign Shop, a customer with a large work order came in and asked to pay up-front for the year — $400.

McKnight told Hanna the truth — she had only just enough for the first month’s rent. Hanna cut her a deal, prorating her first month’s rent to $300 and taking a $100 security deposit for the lease, and that was that — Ellen’s Airbrush was established.

With a $500 loan from her father, McKnight began fixing up the storefront. By day she worked at the sign shop in Smackover, and at night she would drive to El Dorado to clean, repair and re-decorate her new store.

On Jan. 29, 2010, Ellen’s Airbrush officially opened. She had no cash register, just an apron with two pockets; no signage, just a paintbrush and a knack for sign painting; no capital, just a dream.

“We started on a shoestring,” McKnight said. “I had to bring my lunch everyday. If I wanted to vacuum, I had to bring the vacuum from home.”

The first time she made a profit, she bought an LED ‘Open’ sign; then a vacuum, then a mini-fridge. McKnight started feeling like she’d made it, and on her own — until spring, when she ran into trouble with the El Dorado Historic District Commission.

As the months went on, McKnight began advertising her business with signs outside. Strict regulations in the Historic District brought her at odds with the EHDC, who she said never provided her with a hard copy of the signage rules for downtown businesses. After six months of hassle, she resolved the issue with the commission and helped to ensure that every new downtown business owner would receive a copy of the rules upon applying for their business license.

“My husband kept telling me ‘it’s free advertising!’” she laughed.

On her birthday the following year, McKnight saw another property up for rent — an old mechanic’s shop at 401 N. West Ave. Her husband encouraged her to call the management firm, Jan’s Realty, and she did as they waited at the red light at North West and Oak.

“This is a miracle, OK?” McKnight said. “She said that she told three other people they had to wait because she wanted to show it to me first. I was kind of shocked at that.”

The rent here was higher than her downtown storefront, but the space was bigger, and McKnight knew she’d have more visibility on the Avenue. Janice Long, the owner of Jan’s Realty, also gave her a hand, adding a new central heating and air system.

“You can’t be artistic when you’re sweating or freezing,” McKnight said.

On Aug. 16, 2011, McKnight moved into the new storefront on North West Avenue, and she’s been there ever since.

Eventually, McKnight and her second husband divorced, and for a period she lived inside her store because she couldn’t afford a second rent. When she met her current husband, Todd, she found a stability that’s helped keep her afloat these past years.

McKnight recently expanded her business again, adding heat-transfer vinyl goods alongside her airbrush art and hand-painted signs. She’s made the garage half of her property into a studio, complete with multiple design and paint stations, including a four-sided airbrush easel and a sign easel stretching across the room.

Her shop is filled with examples of her work and notices for customers; if one leans over her counter, they’ll see a few works in progress and the easels stained with years of paint.

McKnight said she doesn’t have plans to quit any time soon. The only airbrush artist and one of the few traditionally trained sign-painters in miles of south Arkansas, she said she’s happy to provide a service for the community.

“I make things that no one else does; they don’t sell what I do at Wal-Mart,” McKnight said. “I’m particular about my products. If I don’t like it, I don’t expect my customer to. … I tell my customers that I love what I do and I love making them happy.”

Ellen’s Airbrush is located at 401 N. West Ave. For more information, contact McKnight at 870-665-2355 or [email protected], or visit facebook.com/ellensairbrushandsigns.