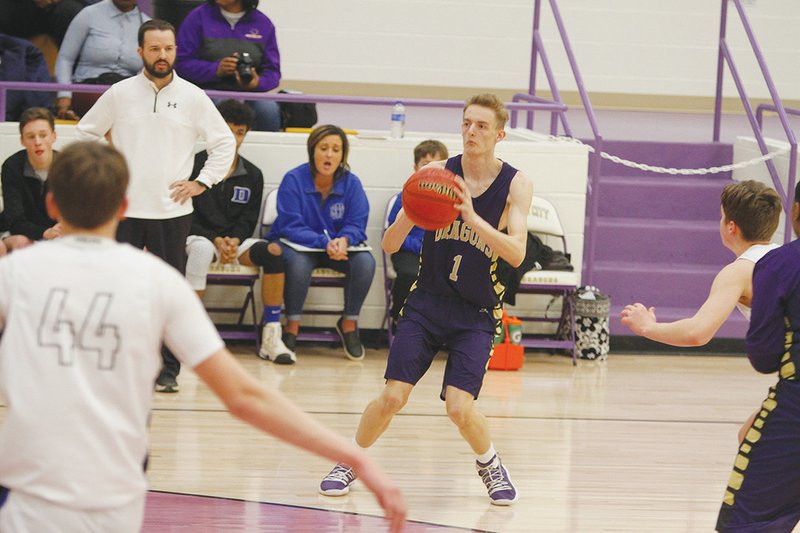 Terrance Armstard/News-Times In this file photo, Junction City's Ryan Allen gets ready to take a shot during the Dragons' contest against Dierks last year in the 2A South Regional Tournament. Junction City has submitted a bid to host this year's regional tournament, as well as the 2A State Tournament.

Union County schools will pitch their efforts to try and host postseason tournaments later this week in Little Rock.

On Monday, the Arkansas Activities Association released bids that were submitted by schools to host regional and state tournaments with Junction City and Smackover in the running to host events.

A year ago, Junction City hosted the 2A South Regional Basketball Tournament with the Dragons winning the event, but they have plenty of competition to host with Acorn, Dierks and 8-2A rival Fordyce also placing bids.

There is also plenty of competition to host the state tournament with Marmaduke, Melbourne, Quitman and Rector also entering bids.

Marmaduke has hosted the state tournament on two occasions back in 2013 and 2016.

Should Junction City get the state tournament, it would mark the second time a school from the 8-2A has hosted within the last decade after Hampton hosted back in 2014.

As far as the regional baseball and softball tournaments are concerned, Woodlawn and Horatio placed bids along with Junction City.

Smackover placed bids to host the 4-3A Regional Tournament and 3A State Tournament for softball, but should the school be successful in their bids, the games would be played at the Recreation Complex in El Dorado.

Smackover is no stranger to hosting both events having done so several times over the last decade. The last time Smackover hosted the regional was 2017, while 2018 served as the last time they hosted the state tournament.

The tournament sites will be announced on Thursday.