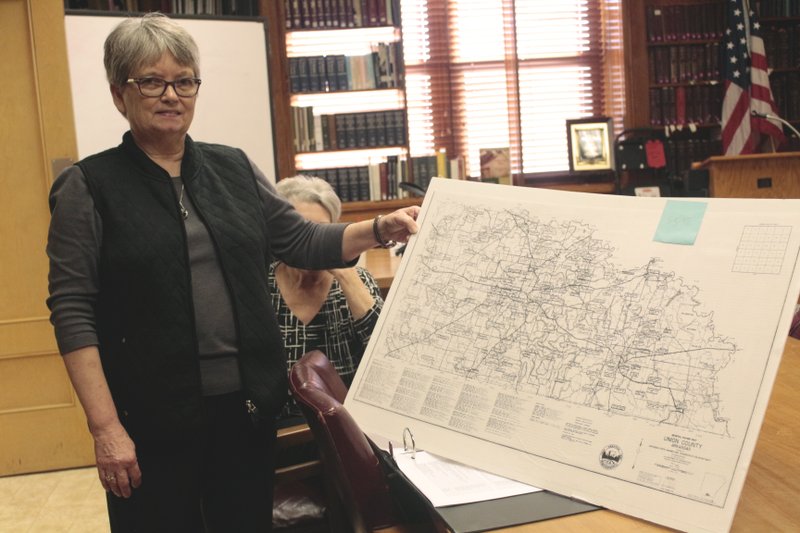 Union County Genealogical Society President Carolyn Smith shows one of the cemetary maps produced by members of the club. The maps are available for sale at $5. - Photo by Caitlan Butler

The Union County Genealogical Society will hold their monthly meeting tomorrow at the Charles H. Murphy House at 900 N. Madison.

The Genealogical Society meets each month, typically at Barton Library. This month, though, they will take a tour of the Charles H. Murphy House and learn about its history.

Originally built in 1925, the Tudor Revival style home was listed on the United States National Register of Historic Places in 1983. Some of its notable features include the wrought iron fence broken up by brick columns with double iron gates, the staircase, fireplace mantels and bookshelves, the latter two of which feature arches characteristic of the Tudor architectural style.

The Genealogical Society will also present a copy of Diny Nolan Landen and Tom Whitehead’s “Cherokee Plantation on the Cane River” to Barton Library. The book tells the story of Murphy’s father’s owning and Murphy’s sister’s restoration of the family’s Cherokee Plantation in Natchitoches, Louisiana and is filled with historical and full-color photos of the farm.

Smith said the meeting will be open to the public, who she hopes might become interested enough to join the Genealogical Society.

“We would really like to get some new members,” Smith said. “There’s so much to learn about, and so much more we don’t know about yet.”

Founded in 1976, the Genealogical Society endeavors not only to learn about each members’ personal family ties, but to preserve the history of Union County as a whole as well. Currently, there are about 30 local members, Smith said.

Every edition, including some newly bound volumes, are available to read in Barton Library’s Genealogy Lab. Members of the Genealogical Society, including Smith, volunteer at the lab on Thursday and Friday afternoons. They plan to re-organize the lab this year.

The Genealogical Society also works on large-scale projects. Currently, members are working to collect any and every obituary produced and published within Union County. So far, their files fill about seven or eight boxes. The project started in 2016 and will continue indefinitely.

In the past, the Genealogical Society produced cemetery maps showing each cemetery in Union County. They still have some, which are for sale for $5 each.

For those who love learning about their heritage or family history, the Genealogical Society can be a helpful resource. Smith said she would like to see younger people getting involved, and that the Genealogical Society’s members could help such individuals learn the best practices for collecting and documenting their families’ history and heritage. She said she can also help new members interpret ancestry-related DNA tests.

The Union County Genealogical Society meets the second Tuesday of each month (except in May, when they meet on the first Sunday in order to avoid meeting on Mother’s Day), usually at the Barton Library. Membership costs $15 per year, or $20 for couples.

Sunday’s meeting will be held at 900 N. Madison Ave. at 2 p.m. To learn more about the Genealogical Society, visit facebook.com/UnionCountyGenalogicalSociety.