Rock Steady Boxing to celebrate one year at HealthWorks 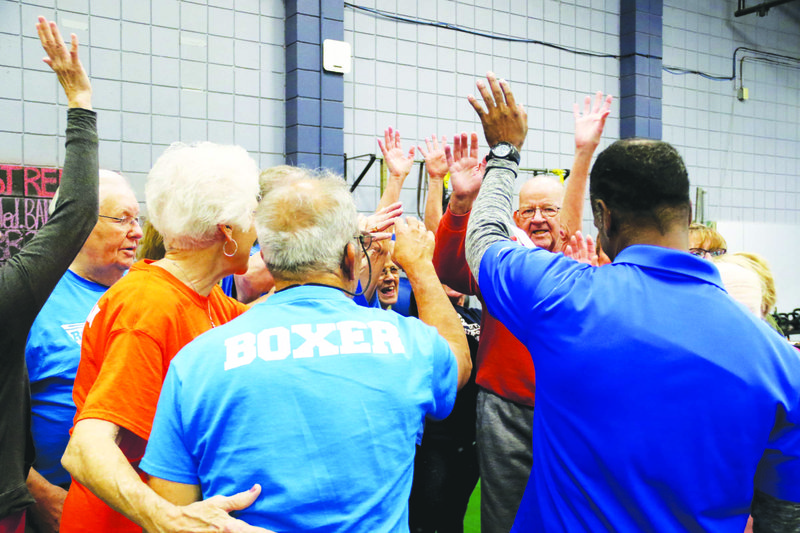 Boxers, cornermen, volunteers and coaches sign off after a workout on the second floor of HealthWorks Fitness Center Nov. 13. The group makes up the members of the Rock Steady program, which aims to stop and reverse the onset of Parkinson's Disease.

On the third floor of HealthWorks Fitness Center, a group of boxers are training to battle an opponent outside of the ring: Parkinson's Disease.

The disease is a progressive nervous system disorder that affects movement and speech. It is most known for tremors and typically develops in middle or late life, according to the Mayo Clinic.

The boxers, or those who have been diagnosed with Parkinson's, are in the Rock Steady Boxing program, which celebrates its one-year anniversary at HealthWorks Jan. 14.

For nurse and author Barbara Hogg, who was diagnosed with Parkinson's around 1991, the program has allowed her to accept the care, concern and help from her family.

She said her husband was awarded with caregiver of the year in 2019.

"He said he does it because he enjoys it because it's for his best friend. And I appreciate that so much," Hogg said. "That really helps me to have my husband be with me."

Hogg's husband accompanies her to the Rock Steady classes, which are Monday, Wednesday and Friday from about 10:30 a.m. to noon every week.

Other boxers have spouses or family members with them as well, but in the gym, they're called cornermen.

The cornermen often help their boxer along and sometimes performs the exercises as well.

However, it's not like the exercises are simple: it's an intense workout.

"They work harder than most of the people in this gym because they want to live and they want to live a really good life for as long as they can," said Rhonda Sayers, coach and group fitness coordinator at HealthWorks. "They fight so hard, they do."

Sayers works alongside personal trainer Jimmy Massey and wellness/fitness services director Terry Clark as coaches. Sayers, Massey and Clark all went to training and learned about Parkinson's Disease and the Rock Steady program.

The three pull workouts from the Rock Steady Boxing organization that best suits their boxers and add some voice projection as well.

Sayers said the workouts are forced intense exercises that are proven to have an immediate effect on Parkinson's patients.

"When they come in, they're shaking, it's early morning," Sayers said. "When we get them into that second round of work and we see them calm down and the shaking stops and they're picking up their feet and it's clicked with them what they're supposed to be doing… By the time they leave here, they're just calm."

Rock Steady Boxing is a 501(c)(3) nonprofit organization that was founded in 2006 by former Marion County (Indiana) prosecutor Scott C. Newman, who lives with Parkinson's.

According to the program's website, Newman was diagnosed with early-onset Parkinson's at 40 years old. He worked with his friend Vince, who was a Golden Gloves boxer, and developed Rock Steady.

Sayers said she and Clark originally pitched the idea to the HealthWorks director about two years ago, but it wasn't the time to implement it. When they learned people from the community were making their way to Louisiana Tech to participate in the program, they pitched it again and it was approved.

Rock Steady Boxing at HealthWorks is sustained by donations, grants and by some membership fees. Sayers said this year, the organization will host a couple of fundraisers — a 5K in the spring and HealthWorks's first Turkey Trot on Thanksgiving Day.

Since the program was approved, Sayers said she and her fellow coaches have learned a lot about the program and their boxers.

"We're able to help them and meet their needs more on an individual basis than in the very beginning when we were looking at them as a group," Sayers said. "It's so easy with them because they're so eager to stop this disease in its tracks, which is what we hope to do with Rock Steady."

She also said she's learned a lot from the boxers and the disease, too.

"I'm going to cry but I'm going to tell you what I've learned over the last year is that no matter what I see when I'm looking at them, they're still who they've always been inside," Sayers said. "They're combating this disease on the outside and what it's doing to their bodies, but their minds and their brains and their personalities, they're still that same person."

Sayers said remembering that, being empathetic and not sympathetic and finding that common ground is why the program is doing so well and why the group has such great chemistry.

The coaches and boxers are also assisted by volunteers who will demonstrate the exercises, keep the boxers on task and keep them moving from station to station during workouts.

Linda Landes has volunteered with the program since April 2019. She said she first saw the program in Hot Springs with her daughter-in-law.

Once she knew the program was in El Dorado, she had to help out. She said some of the boxers get really competitive.

Hogg said she treats the program like it's her job because it keeps her going.

Even though it's a workout, she said everyone still has a good time.

"It's hard to say we play because we work so hard, but it's good, it's a good thing," Hogg said. "I've lost weight, I put on muscle, I walk better, I have more confidence."

Hogg said she has been a keynote speaker for Parkinson's awareness events before and writes books about it, like "God, Golf and Parkinson's," which she hands out to people free of charge.

She said one of the most important aspects of the program is the community it brings. Hogg said at a conference she and her husband went to in Japan that the most important thing for Parkinson's patients is to have friends and a community, and that's what Rock Steady at HealthWorks brings.

"This program needs to be going," Hogg said. "I always tell [people] when they come in, I always say that this is a place where you want to be when you have Parkinson's. A lot of times they don't want to be here.

"They don't want to say, 'I have Parkinson's.' They're embarrassed. And it shouldn't be that way because everybody who has, if they come out and see us and see how happy we are and how we work hard and what we do, as far as jumping jacks, it's not that hard, but it is for me. I've had this stuff 29 years. It's been exciting to see the changes."

For those interested in joining Rock Steady or think a family member or friend could benefit from it, contact Terry Clark at [email protected] or 870-862-5442. People must have a physician referral to participate and can join throughout the year.