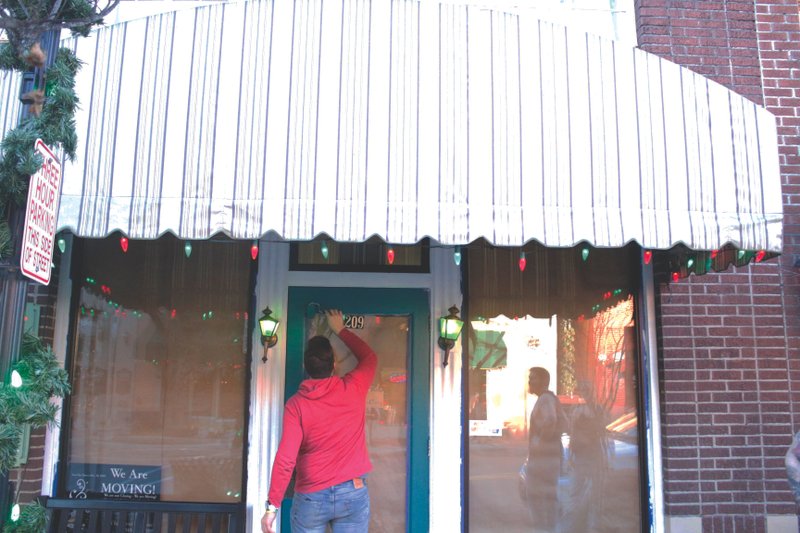 At Ease Essentials owner Michael Cary paints the shop door at the business’s new location at 209A East Main, in the El Dorado Dry Goods Building. He and other employees worked to prepare the storefront earlier this week for a soft opening today. - Photo by Caitlan Butler

Cary has been a staple of commerce in El Dorado since opening his first enterprise, At Ease Licensed Massage Therapy Clinic, in the shopping center at Fifth Street and Madison Avenue, in 2002.

By that time, medical marijuana use had begun picking up steam across the country. Medical cannabis was legalized in California in 1996 and by 2000, seven additional states had passed legislation making medical cannabis use legal as well.

As the 1990’s came to a close, Cary, who has a form of epilepsy, was on a drug regimen of 29 pills per day to treat his aphasiac seizures; after reading reports of medical marijuana’s efficacy in treating epilepsy patients, he decided to ditch the pharmaceuticals in favor of the flower.

“Up until the year 2000, I had totally gotten off all of my medicines and switched to cannabis primarily,” he said. “I couldn’t take the pills anymore because I was in college and could not focus. They had me on like Klonazapam and Lorazepam, and I’m a Nazarene minister’s grandson, so I was not about that life.”

For about as long as he’s been a business owner, Cary has been a medical marijuana advocate. In 2011, he joined the Arkansas for Compassionate Care Campaign to gather signatures for the state’s first effort at legalizing medical marijuana; though it did not pass that year, Cary didn’t give up.

He eventually joined the state’s Drug Policy Education Group, a drug policy reform advocacy group, which helped lead the effort that saw medical marijuana legalized in Arkansas in 2016; he serves as Vice President of Arkansans for Cannabis Reform, the ballot committee created by the DPEG for two new marijuana-related ballot initiatives he hopes to see on the 2020 ballot.

“The separation of the two helps negate any ambiguity in the law,” Cary said. “Basically, you don’t want to have a law-within-a-law.”

The Adult Use Cannabis Amendment, known officially as the Arkansas Marijuana Legalization Initiative, would legalize recreational marijuana for adults over the age of 21; the initiative also includes language about rules and procedures for regulating marijuana growth and sale, directions for issuing tax revenues from marijuana sales towards public pre-kindergarten, after-school programs and the University of Medical Sciences and instructions on the volume of marijuana one may have in their possession.

“The group feels strongly that police resources and the money that goes toward incarcerating for marijuana alone is extremely expensive, and we feel that that should be an adult’s choice,” Cary said. “It has worked successfully in other states, and it would definitely help ease the burden of our law enforcement officials.”

The Arkansas Marijuana Expungement Initiative would allow those convicted of minor marijuana-related crimes, such as the sale or possession of less than one pound of marijuana, to petition a court for the expungement of the offense from their record. The initiative includes measures for offenders to be released from incarceration, to have their sentences reduced, to have their conviction expunged from their record and/or to have their voting rights restored. It would also create a ‘Cannabis Conviction Relief Court’ for those cases.

“They’d have a fresh start,” Cary said. “It’s relatively simple for the state to do, and this will help quite a few folks.”

Two years ago, after he’d been involved in medical marijuana advocacy for several years already, Cary expanded his massage business to include some CBD products, which he found helped some of his clients suffering from tension and pain.

CBD is shorthand for cannabidiol; it is a cannabis compound without the psychoactive effects associated with THC, or tetrahydrocannabinol, which is the chemical that causes the high associated with marijuana use. Arkansas law requires that all CBD products contain .3 percent or less THC.

“There’s a lot of studies coming out that are quantifying the anecdotal evidence we get from our own clients. It’s helping with pain, anxiety and sleep particularly,” Cary said. “A lot of people that use it for pain are able to get off their pain medicines and muscle relaxers. … It won’t get your body high, but it will give your body relaxation.”

Cary started by offering homemade lotions and topical treatments to his massage clients. Eventually, the CBD side of his businesses grew enough that he opened a second ‘At Ease’ location, this time dubbed At Ease Essentials, as a kiosk in the Mellor Park Mall.

“We want to facilitate these areas based on need, because there aren’t quality products besides what you find in a gas station, and those are not regulated the ways that ours are,” Cary said. “Always check the label [on CBD products] and always look for the Certificate of Analysis, COA. It’s very important.”

A year later, Cary is putting the final touches on another new storefront at 209A Main Street (former location of Backwoods Art & Frame and The Perfect Touch). The store will serve as the El Dorado headquarters of the At Ease brand, which already has another storefront in Magnolia, on Jackson Street.

Cary hopes to expand the business even more after its rapid growth has demonstrated the popularity of his products. He said he is currently scouting for locations in Ruston, Louisiana and Texarkana, Texas.

The products at At Ease Essentials will only be available for purchase to adults over the age of 18, though Cary said minors will be allowed inside. He said Main Street El Dorado has expressed support for the business, as have his neighbors on the Square.

“We are very blessed to have full support from members of Main Street,” Cary said. “A lot of folks are happy, because as you can see, we’re not trying to be irresponsible with the way that its presented.”

Cary was particularly happy to have found a storefront in the El Dorado Dry Goods Building, which was built in 1927. He said he thinks hemp products may have been sold in the building when it was first opened, as hemp did not become illegal in the United States until 1937.

“Organized in 1898 and built in 1927, and you can bet that hemp was sold here 100 years ago. It’s really neat to be able to come back and come downtown to Main Street when hemp is now legal again,” Cary said.

At the downtown storefront, Cary will continue to offer therapeutic massage services, alongside the retail CBD items, which include edibles like gummies, salted caramels, peach rings and more; tinctures for both morning and night use; and topical items like lotions, salves and body butters.

Additionally, because of the size of his new location, Cary will be able to house the production laboratory where he creates all of his CBD products, and an online sale distribution center.

The downtown At Ease Essentials will have a soft opening today, offering some of their most popular products for sale. The mall kiosk will remain open for the next few months, Cary said, until the downtown location is able to handle all customers’ needs. He expects the downtown store to open fully by the start of February.