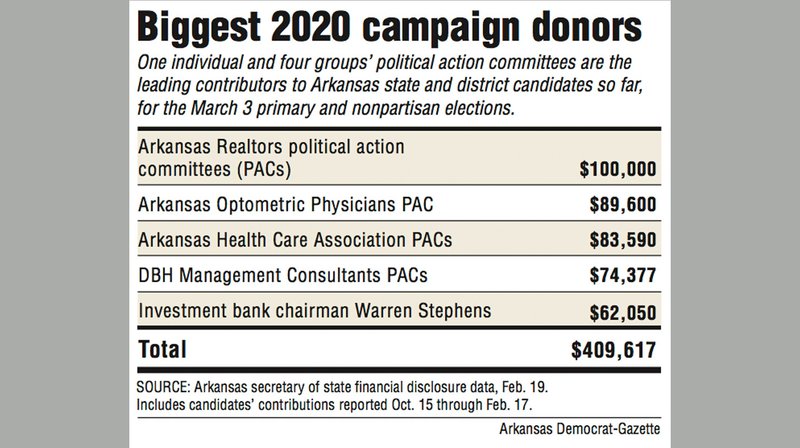 Contributions from the top five donors totaled more than $400,000 to candidates for state legislative offices in Arkansas' 2020 election, according to campaign financial disclosure reports filed with the secretary of state's office.

Each of the three had distributed more than $80,000 among dozens of candidates as of Jan. 31, according to the campaign financial disclosure filings. The Arkansas Realtors Association tops the donor list at $100,000.

The fourth-largest contributor is a group of PACs of political consulting firm DBH Management Consultants of Morrilton, operated by former legislator Bruce Hawkins.

The company, which claims among its clients Southland Casino Racing of West Memphis and nursing home chain Reliance Health Care Inc. of Conway, has seven registered PACs that donated a total of $74,377.

The fifth-biggest contributor is an individual, Warren Stephens of Little Rock, who is the chief executive officer of the Little Rock financial services firm Stephens Inc. and a long-standing large donor to national and state candidates.

Nationally, since the 2000 elections, he has contributed more than $18.5 million to state and national candidates and political groups, according to the National Institute on Money in Politics, a Montana-based nonprofit that tracks campaign spending.

Most big donors have business or personal interests that can be affected by lawmakers and by state and national regulations.

"Nursing homes are one of the most highly regulated industries in the country, and Arkansas is no exception," Arkansas Health Care Association Executive Director Rachel Bunch said. "As a result, the industry has issues of concern at the Legislature at all times, and that has been the case for decades."

A spokesman for the Arkansas Realtors Association, Cameron Kuhn, said his group supports state candidates "whose values closely align with the values of Realtors."

Spokesmen for the optometrists association, DBH and Stephens either did not respond to calls for comment late last week or they declined to discuss political contributions.

A political observer close to one of the big donors did say that large political contributions spread among many candidates usually cluster around incumbents, who are likely to be reelected and wield power in the General Assembly.

That's borne out by the Arkansas Democrat-Gazette's analysis of more than 20,000 contributions to candidates' campaigns for state and district offices this year.

The data covered campaign contributions through Jan. 31, which candidates were required to report by last week.

Most donations by the biggest givers went to Republicans, whose party dominates both houses of the General Assembly, the newspaper's analysis showed.

Six incumbents reported receiving more than $10,000 from some or all of the five biggest donors.

A Democratic incumbent who drew well from big donors is Sen. Eddie Cheatham of Crossett, with $9,500.

The campaign contribution totals are likely to grow during the election year. Arkansas' Republican and Democratic primary elections are March 3 and any runoff, if needed, will be March 31. The general election is Nov. 3.

Candidates' final reports showing campaign donations and expenditures for all of 2020 are due Dec. 30.

A review of the biggest donors' contributions also shows the ability of associations and other groups to give more money to a candidate than an individual is permitted to donate.

Individual givers can contribute a maximum of $2,800 to a candidate, per election, under Arkansas rules this year.

But groups such as the Arkansas Realtors Association, Arkansas Health Care Association and DBH Management Consultants register multiple political action committees. Each of those can give a candidate the maximum permitted amount.

An example is in the filings of Cooper, the senator from Jonesboro. They show $5,600 in contributions from two Arkansas Health Care Association PACs. That doubles what Cooper could receive from an individual.

Cooper's campaign also reported receiving a total of $4,700 from three PACs connected with DBH Management Consultants, according to records on the secretary of state's financial disclosure website.

• Arkansas Realtors Association -- The group of 9,090 members receives voluntary contributions to its political action committees from members and others who support Realtors' issues, the association's spokesman said last week.

The association has numerous issues of interest in the Legislature, including opposing lawmakers' efforts last year on an implied warranty of habitability bill to set standards for rental housing.

• Arkansas Optometric Association -- Another group with interest in state lawmaking, this association last year pushed successfully for a law that allowed optometrists to perform a broader variety of eye surgeries. That legislation is now the subject of a referendum backed by ophthalmologists who want to ask voters to reject the law.

• Arkansas Health Care Association -- The association has 253 facility members, including nursing homes and assisted living facilities, and historically has been among the biggest political campaign donors in Arkansas.

Legislative issues the association follows include "long term care regulation, Medicaid, Medicare, private insurance and employment matters, just to name a few," said Bunch. "Because of this, industry members feel a need to exercise their constitutional right to engage in our electoral process in order to protect the interests of residents, employees and investors."

• DBH Management Consultants -- The company historically has set up numerous PACs to distribute campaign contributions. The donations generally represent the interests of the company's clients, who in addition to nursing homes and casinos include CenterPoint Energy, CVS Health, Delta Dental and the Arkansas Association of Chiefs of Police.

• Warren Stephens -- Stephens is known as a donor to mostly conservative candidates and causes.

According to campaign contribution reports, his gifts include $25,000 in 2009 to the National Republican Congressional Committee; $500,000 in 2012 to Restore Our Future, a group created to support then-presidential candidate Mitt Romney; and $1.25 million in 2014 to American Crossroads, which raises money for certain Republican candidates.