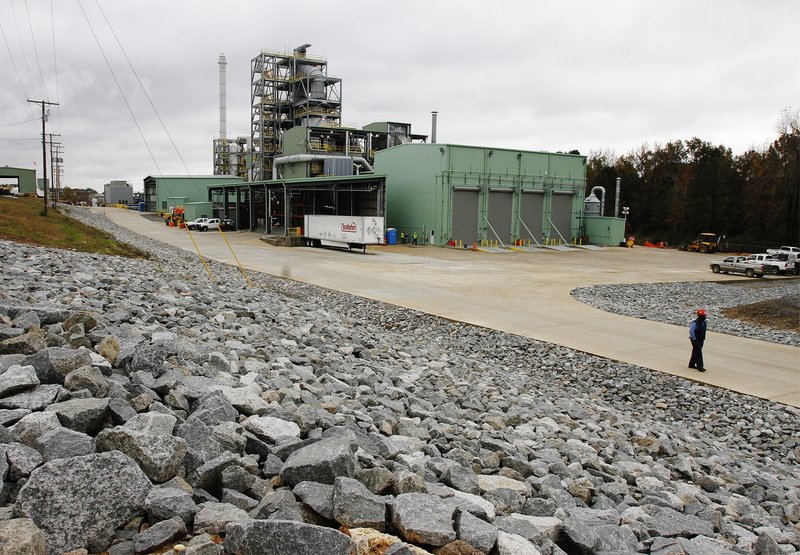 Incinerator: In this December 2016 file photo, an employee walks across the Clean Harbors’ complex in El Dorado with the new technologically advanced incinerator shown in the background. The company unveiled the new incinerator four years ago. Clean Harbors was recently named in a lawsuit against the U.S. Department of Defense.

Clean Harbors' El Dorado Incineration Facility has been named in a lawsuit against the United States Department of Defense, which alleges that the DoD has approved the incineration of toxic chemicals in violation of several federal laws.

Earthjustice, a nonprofit environmental law organization headquartered in San Francisco filed a suit Thursday against the DoD and Sec. of Defense Mark Esper; the U.S. Defense Logistics Agency, which awards contracts for the DoD, and its director Darrell Williams; and Heritage Environmental Services, LLC and Tradebe Treatment and Recycling, LLC, who were awarded contracts challenged in the lawsuit. Clean Harbors is not a defendant in the lawsuit.

The suit alleges that the DoD failed to conduct required environmental reviews prior to awarding contracts to the LLCs named in the suit to dispose of PFAS-containing firefighting foams by incinerating them in violation of the National Environmental Policy Act (NEPA) and the National Defense Authorization Act (NDAA). Earthjustice hopes to gain access to the contracts for incineration between the DoD and the LLCs.

Per- and polyfluoroalkyl substances, known as PFAS, are man-made chemicals that have been in use in commercial goods since the 1940s in items like Teflon, water-repellent fabrics and the aforementioned firefighting foams. According to the Environmental Protection Agency, there is evidence that exposure to PFAS can lead to adverse human health effects and the chemicals are persistent in both the human body and the environment.

The firefighting foams referenced in the lawsuit have recently been phased out of production by manufacturers due to their health effects in favor of foams made with different PFAS chemicals, per the EPA. The firefighting foams that have been phased out are the ones bound for incineration; they contain the PFAS chemicals PFOS (perfluorooctane sulfonate), and the PFAS chemical PFOA (perfluorooctanoic acid) is a byproduct of the foams' manufacturing process.

Alejandra Dávila Fragoso, National Communications Strategist for Earthjustice, said the DoD has not been forthcoming about contracts for PFAS-containing firefighting foam incineration.

"We can say that it's very likely you've received PFAS at some point, but we don't know what DoD is doing right now because they haven't been forthcoming," he said.

The EPA notes that PFAS stay in the human body for an extended period and that the chemicals accumulate. According to the EPA, people are exposed to PFAS in a variety of ways, including through food, which can be contaminated through the water and soil used to grow it, its consumer packaging and equipment used to process it; through the normal use, biodegradation and disposal of consumer products containing PFAS; through working at a PFAS production facility or at a manufacturing facility that makes goods containing PFAS; and through contaminated drinking water.

"Whole communities have been drinking polluted water for a long time — that's how we learned how terrible this was," Fragoso said. "And PFAS haven't been as studied as PFOS, just because they haven't been around for 50 years, but they're essentially the same thing. It's part of the same class, same chemicals, and what we're seeing is that the health effects are very similar, too."

Phil Retallick, Clean Harbors' senior vice president for compliance and regulatory affairs, said the PFAS chemicals, including the firefighting foam described in Earthjustice's lawsuit, incinerated at the company's facility in El Dorado are not regulated as hazardous materials.

He said that the company's incinerator is "state-of-the-art" and "world-class," noting that Clean Harbors must adhere to strict air emissions regulations from the EPA, which he said the company does. He said because of the advanced technology of the incinerators at Clean Harbors, he is not concerned that PFAS chemicals pollute the environment or pose a health risk.

"We don't have any concern with respect to the efficacy of incineration to destroy those compounds," he said. "We're very confident that our state-of-the-art incinerators like you have in our El Dorado facility are safe and effective in destroying this compound."

Retallick also said he cannot find any records of the El Dorado incineration facility receiving shipments of the firefighting foam from DoD described in the Earthjustice lawsuit.

However, the lawsuit claims that a subcontractor, Tradebe Treatment and Recycling, LLC received contracts from the DoD for PFAS incineration, and that through the contracts, they may send the firefighting foams for incineration to any of eight incineration facilities, one of which is Clean Harbors. It does not specifically claim that Clean Harbors received the chemicals; just that they could have and were likely to have.

Retallick said the company's No. 1 priority is to be a good neighbor to those living in the communities that host their facility.

"We're right here in the City of El Dorado, so we're a neighbor. We're a guest of the community, and our No. 1 job, our No. 1 important philosophy is to take care of and really protect the public's health and welfare," he said. "I think we've been doing that for decades, and the Arkansas DEQ [Department of Environmental Quality] has and the data that we've released to the public shows that we do that."