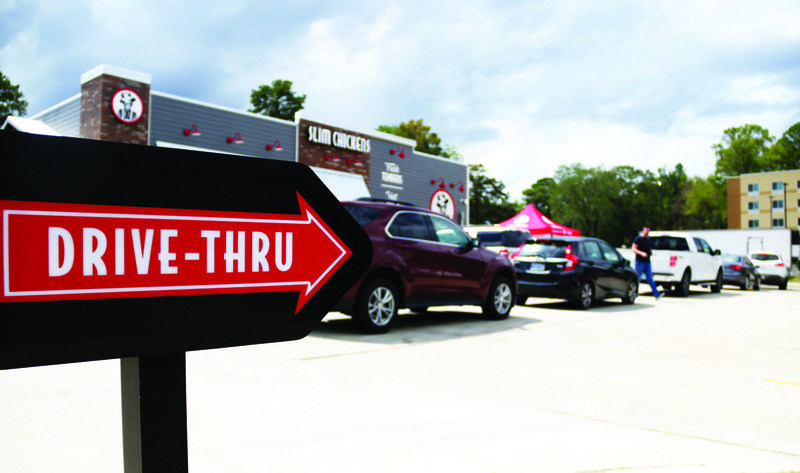 It has been nearly five months since Slim Chickens joined the El Dorado business community and expanded the area's fast-casual dining options, specializing in chicken tenders, Buffalo wings and more.

The 1720 N. West Ave. location is considered prime real estate in a high-visibility area that is front of El Dorado's newest lodging establishment, Fairfield Inn and Suites by Marriott, and next to McDonald's, one of the world's most iconic fast-food brands.

The grand opening of Slim Chickens in El Dorado was held Sept. 16, 2019, and drew heavy vehicle traffic that snarled deeply and came to a standstill in the outer southbound and center turn lanes on North West Avenue near West 13th Street.

It was a sight that exceeded expectations for the El Dorado grand opening, said John Luckett — chief operating partner of Dixie Chicken, LLC, the franchise owner of Slim Chickens in El Dorado.

Slim Chickens, which is headquartered in Fayetteville, has more than 100 locations in 15 states and internationally.

Nineteen of those restaurants are in Arkansas, with the 100th store opening in December in Little Rock — the fourth location to open in the capitol city.

The El Dorado location is the eighth to be opened by Dixie Chicken and Luckett said it was the strongest opening the franchise had had so far.

"Customers were lined up out the door. Cars were backed up 30-deep. It was an incredibly busy opening and we got through it with minimal issues," Luckett said.

From an economic standpoint, Luckett said El Dorado seemed like the ideal location to grow the Slim Chickens/Dixie Chicken brand and in turn, the restaurant could help stimulate the local economy with a new construction project and a new business.

He said the endeavor took about a year to complete, from the groundbreaking to licensing to the construction phase and finally, preparations for the opening.

Including construction crews and store employees, the project brought about 75 new jobs to area, Luckett said.

"… [T]he city itself was fantastic throughout the entire process. The entire community was amazing to work with and it was a very educational experience for us as well," he said. "We had good teamwork and cooperation and the city couldn't have been more welcoming."

and South Arkansas is often not enough to sway business prospects to locate here.

While researching the area, Luckett said Dixie Chicken was aware that the city's population had dropped below 20,000 but Dixie officials also understood that Slim Chickens could pull in business from county residents.

"And we were right. We also were in touch with the Wendy's franchisee in the area and the numbers that they provided to us were very promising," he said, adding that he knows of people who have driven from as far as two hours away to visit the El Dorado store.

Additionally, Dixie officials felt that El Dorado would mesh well with company culture and its mission to serve up southern hospitality and fresh, handmade food.

Rounding out the menu are fresh sandwiches, salads, wraps and Slim Chickens' signature chicken and waffles.

Rotating desserts served in Mason jars, a southern staple, offset the savory side of the menu.

"Both Dixie Chicken, LLC, and Slim Chickens are southern at heart, and our roots grow very deep here in the South," Luckett said. "You can't find a better southern town that embodies southern hospitality than El Dorado. We have great values, a great product and the people of El Dorado have been very welcoming."

With that, Slim Chickens is also looking at ways of giving back to a community that has shown support and encouragement for the franchise, Luckett said.

Area school football games, the Boys and Girls Club of El Dorado and the Murphy Arts District are just a few community activities with which Dixie/Slim Chicken has considered becoming involved.

Dixie plans to open between 15 and 20 Slim Chickens locations over the next three to five years while maintaining focus on its potential growth in El Dorado.

"This town has had its economic ups and downs, including a few rough periods, but the people here are very friendly, hardworking and resilient," Luckett said. "We're just happy to be able to give back however we can."