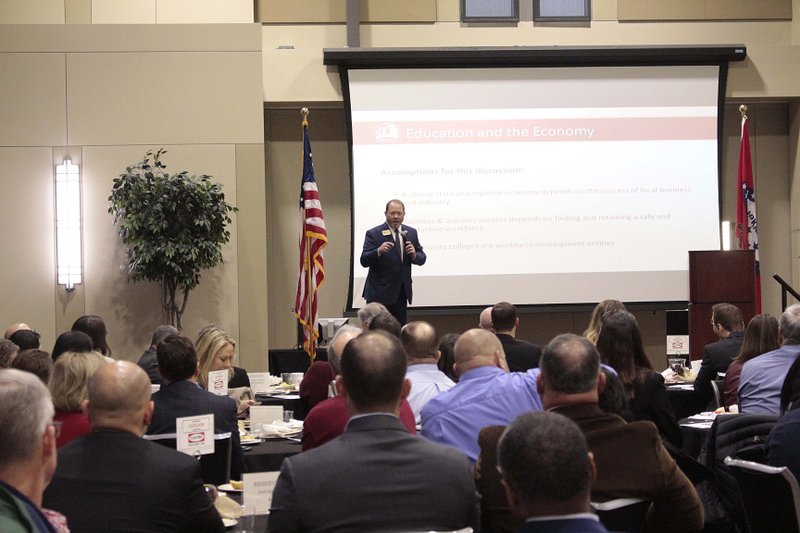 Arkansas boasts 22 community colleges scattered throughout the state, including three within a 45-minute radius of El Dorado, all of which have a focus on technical education, along with Southern Arkansas University in Magnolia.

“We have a rich mix of educational opportunities in south Arkansas, particularly around technical education,” Wallace said. “So the infrastructure and the resources, the basis for what we need to serve the economy, to serve business and industry is in place.”

SouthArk works with other two-year colleges in the state to ensure students all over have access to educational opportunities. Wallace noted that in general, community college students are low-income and/or working, which the community colleges work together to accommodate them.

“Our students can’t afford to go 45 miles, realistically,” he said. “Our students today are dependent on Pell grants and student loans and they have to work and take care of their kids. They can’t drive from here to Hot Springs to get a welding certificate.”

However, those students often go on to be some of the top middle-income degree holding earners. Wallace said those with an Associate degree in a STEM field (science, technology, engineering and/or technology) usually make $60,000 per year, with those with a Bachelor’s degree in the humanities or liberal arts trailing by $7,000 per year.

State funding for higher education institutions was under a freeze for years; even as student populations grew, funding stayed the same, according to an August, 2019 report from the Arkansas Democrat-Gazette. Last year, the state injected $9.4 million into higher education institutions, while simultaneously moving from a needs-based funding formula to a productivity-based formula.

Most community colleges, 14 out of 22, lost state funding during the change to the productivity-based formula, but SouthArk’s was recommended to grow by a little over $200,000. SouthArk receives 45 percent of their funding from the state of Arkansas.

However, Wallace said he believes that, as student enrollment declines because of the improvements the economy has made since the 2008 financial crisis as well as a low birth rate, we will see community colleges across the state and nation close.

Wallace said the state is approaching an enrollment cliff, with 15 percent fewer students expected to enroll in colleges at the end of the decade than did around 2010. At SouthArk, Wallace has a goal to raise the student population by at least 600 students to both avoid the cliff and grow enrollment.

“By the end of this decade, there will be far fewer colleges than there are now,” he said. “Thankfully, SouthArk is on very solid footing; I wouldn’t be here today if it wasn’t.”

One idea he has is to encourage the pursuit of STEM certifications and Associate degrees in racial minorities. About 58 percent of students pursuing those goals now are white, and increasing the number of minority students would grow the student population while also promising positive economic outcomes for those students when they graduate.

“We have got to do a better job collectively of encouraging all students in junior high, high school to pursue those middle-income STEM degrees, regardless of color and creed. We’ve got to do that collectively,” he said. “This is a critically important metric. When you think about the precipitous decline we’re experiencing in enrollment and will for the next decade, we can fix it if we just engage minorities in STEM fields.”

Wallace made the point several times that improving economic outcomes for students and those in the workforce depends on collective action, people caring and getting involved.

He gave several suggestions for how those who would like to learn more and work to solve some of the issues facing education institutions can get involved, including: joining an advisory committee at the college; inviting K-12 teachers and counselors to one’s small business to learn about the opportunities available to their students; send industry employees into college classrooms as guest lecturers; donate relevant equipment to K-12 and college programs; recruit college students earlier; and accepting whatever career path one’s child chooses.

“We collectively have to tell those that control our funding and capacity how important to our economy it is and how it (the economy) is dependent on community colleges,” he said. “We need you to be our advocates and that’s so true. You all have much more influence with our elected officials. … We need all of you to work with all of our elected officials to tell them how important this college, and all of our community colleges across the state, are to the economy, because while we may have eliminated some of the discretionary spending in the state of Arkansas, there are still opportunities for us to work through the Legislature, through local elected officials, to find opportunities to serve our students and in turn, to serve you.”