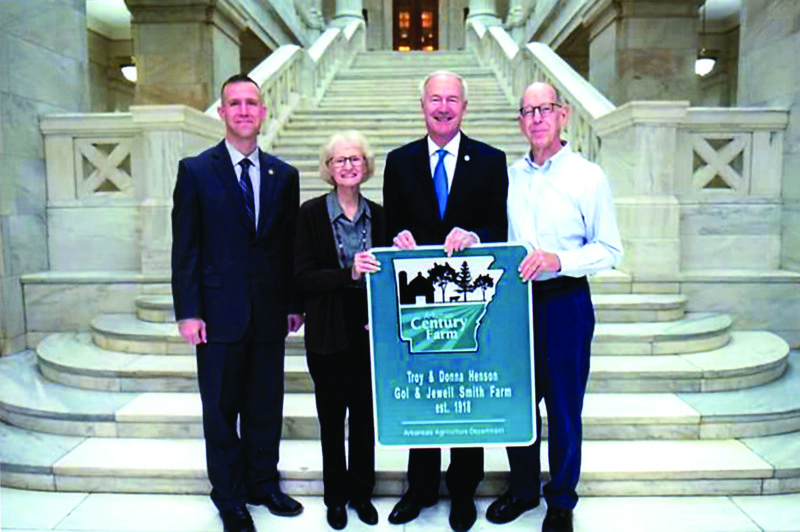 Begun in 2012, the Century Farm Program honors those whose farm properties have been in agriculture production for 100 continuous years. Both the Mahony and Henson and Smith farms started in 1918 as row crop farms to meet the local need and converted to timber producing tree farms over the succeeding years.

Donna Henson remembers hearing her grandfather tell them, "Take care of the land, and it will take care of you."

She and her husband Troy, as well as the Mahony family, said they plan to pass those farms on to the next generation in the hope that they produce for the next 100 years.

"This caring and sustainable attitude is what keeps businesses, farm or non-farm, growing and productive for more than 100 years," said Robin Bridges, county agent for the Union County Cooperative Extension Service. "It makes Union County, Arkansas and America a great place to live."

The Arkansas Department of Agriculture is now accepting applications for the 2020 Arkansas Century Farm program. This program recognizes Arkansas families who have owned and farmed the same land for at least 100 years.

Online and printable applications are available at agriculture.arkansas.gov/arkansas-century-farm-program.

There is no cost to apply.

"Arkansas Century Farm families have persevered challenges for at least 10 decades and have contributed greatly in making Arkansas agriculture the success story that it is today," Arkansas Secretary of Agriculture Wes Ward said. "As Arkansas's largest industry, agriculture has an economic impact of over $21 billion annually and provides one of every six jobs in the state."

To qualify, Arkansas farms must meet the following criteria:

• The same family must have owned the farm for 100 years by Dec. 31, 2020. The line of ownership from the original settler or buyer may be through children, grandchildren, siblings, and nephews or nieces, including through marriage and adoption.

• The farm must be at least 10 acres of the original land acquisition and make a financial contribution to the overall farm income.

Arkansas is home to more than 42,500 farms, of which 97% are family-owned and operated. Since the Arkansas Century Farm program began in 2012, 464 farms have been certified. Lists of previously inducted Arkansas Century Farm families are available at agriculture.arkansas.gov/arkansascentury-farm-program.

Applications must be postmarked on or before May 31 to be eligible for designation as a 2020 inductee. For more information, contact Mary Elizabeth Lea at 501-219-6363 or [email protected]

The Arkansas Department of Agriculture is dedicated to the development and implementation of policies and programs for Arkansas agriculture and forestry to keep its farmers and ranchers competitive in national and international markets while ensuring safe food, fiber and forest products for the citizens of the state and nation.