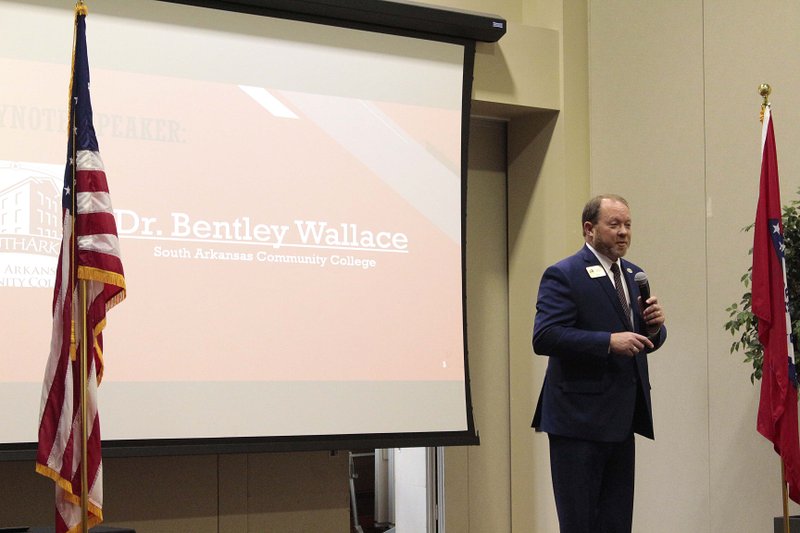 The El Dorado-Union County Chamber of Commerce held their first Economic Outlook Luncheon of the year yesterday, filling the El Dorado Conference Center with business leaders, educators and other stakeholders in the local economy.

“For this conversation, we’ve got to make a few assumptions,” Wallace said. “We know local business and industry must be strong if our state and regional economy is going to be strong. We have to be a part of that. We also have to assume that if a local business or industry is to be successful, they have to have a safe, productive and well-retained workforce. And the third assumption is that community colleges in general, and SouthArk in particular, are in the business of workforce development.”

Wallace’s career path has been a non-traditional one, giving him a unique insight into the needs of industry from his time working in the private sector, as well as knowledge about the abilities and challenges faced by the education institutions that help to build the workforce.

In the United States as well as abroad, the workforce and the population overall is aging as the baby boomer generation, the largest in U.S. history, gets older and retires. Additionally, growth has stagnated in both labor force participation and small business investment, leading to stagnation in the overall economy.

Wallace said that job growth and economic expansion depend not just on the quantitative aspects of our workforce, but also on the quality of our workforce, citing a study undertaken by the Arkansas Chamber of Commerce that said 64 percent of businesses in the state can’t find workers with both the technical and soft skills needed for success in their industries.

“When we think about how education and the economy go together, what we’re really talking about is the quality crisis,” he said. “We’re talking about getting people who could be in the workforce, could be in that labor pool, but they’re not qualified to take those jobs that you have available – those tech-related jobs, those middle skill and above jobs – that you need desperately to fill.”

How do we get on track?

Citing the same state Chamber study, Wallace highlighted ways local businesses and industries can work within their communities to improve the workforce for generations, all of which involved improving access to education.

Educational institutions can help, he said, by engaging students with local industries to improve their awareness of the kind of careers available to them. Wallace also said that making educational programs flexible and region-specific, instead of relying on national curriculum, could help.

“We’ve got to make it so that teachers, principals, superintendents and colleges can adjust their curriculum to align with local and regional needs of business and industry,” Wallace said. “We need to have a flexibility in programs so we can custom tailor that so that when kids come out of high school and community college programs, the knowledge that they’ve gained is relevant to the work that needs to be done close to their hometown.”

Wallace also encouraged a revitalization of apprenticeship and internship programs to allow students from high school to college to get materially engaged with potential career paths.

“When we think about the traditional apprenticeship models, we always think about plumbing and electrical,” Wallace said. “But we’ve got to move to work based learning with apprenticeships, whether they’re a Dept. of Labor registered apprenticeship, a local apprenticeship model, internships and externships – opportunities for students to be in your businesses and learn specifically from interacting with your business and your employees. We’ve got to move to work-based learning. It’s the quickest way to get students engaged and get them thinking about the possibility of working in your industry. Equally important … it can help them move on to what is right [for them professionally].”

He noted that, as evidenced by the decline in labor force participation, some of the youth population, which would typically drive the workforce, has become disengaged. Many young people currently entering the workforce are facing high levels of student debt, and though the stock market has done well lately, real wages have stagnated according to the Pew Research Center, which says that wages today on average have the same purchasing power as they did 40 years ago, though inflation, including the cost of consumer goods, has risen steadily.

“A lot of disengaged youth are highly successful students who have college degrees and they’re 22 or 23 years old and they have no idea what they’re going to do,” Wallace said. “Disaffected youth, there’s a lot of them. You probably know some.”

Wallace also described untapped labor pools, such as the ex-criminal offender population. In Union County, the Wings to Recover program helps connect ex-offenders to education, job opportunities and soft skills lessons to help them not only re-integrate into society but also to succeed on their own.

“Those who have figured out how to provide wraparound services to returning offenders – because its not enough for someone who’s just getting out of jail or prison to just give them $50 and a bus ticket and say ‘hey, there may be a job in El Dorado, why don’t you head that way?’ and they land here and there’s nothing to support them,” Wallace said. “When we connect with those prisoners at six months pre-release and engage them with educational opportunities, connect them to an employer within moments of release and make sure that they’ve got housing and transportation and food and a job to go to as quickly as we can get them in, those are some of the most reliable and productive employees you’ll ever have.”

On the industry’s side, Wallace encouraged related businesses and industries to work together with education institutions to train the potential local labor pool. While companies worry about their competition poaching their workforce, Wallace said they would be better served working together so that workers are overall more qualified.

“There’s tremendous opportunity to make sure that those employer partners are working together with the education provider to deliver training that’s exactly what they need at that time,” Wallace said. “What we know is that when employers go in together and they come up with curriculum that fits with any of those companies and they start to fill those openings at all companies as a result of that collaborative effort, that fear of [employee] poaching goes away and the poaching goes away.”

Statistical data is very valuable to employers, Wallace said, adding that it should be used to review not only the workers employed at any given company, but the local workforce overall, the company’s business model and other factors that can demonstrate the success potential or lack thereof for the company.

Most of all, Wallace said, for employers to maintain the qualified workforce they require, employees must be valued.

“This is one of those things where companies can’t just depend on the high school and the community college to make sure that education is working for their employees,” Wallace said. “When we’re talking about finding that talent, its one thing to find them, but its another thing to keep them.”

At SouthArk, local industry has played a major role in determining new programming and even helped design the curriculum that would be taught at the college’s Advanced Manufacturing Training Center.

The school’s tuition is also one of the lowest in the state, making it highly accessible for local students, Wallace said. The last step in improving outcomes for employers and workers, he said, is making sure our children know that there is no one pathway to success.

“You have got to make it okay for your peers to tell you that their sons and daughters and grandsons and granddaughters are choosing something different from that path that was the only acceptable path for me,” Wallace said, noting that he was expected after his high school graduation to attend a four-year university and work a so-called “white collar” job. “When we change that dynamic, we’ll start to shift that lack of quality and that lack of quantity because we’ve changed the social dynamic around what success looks like.”