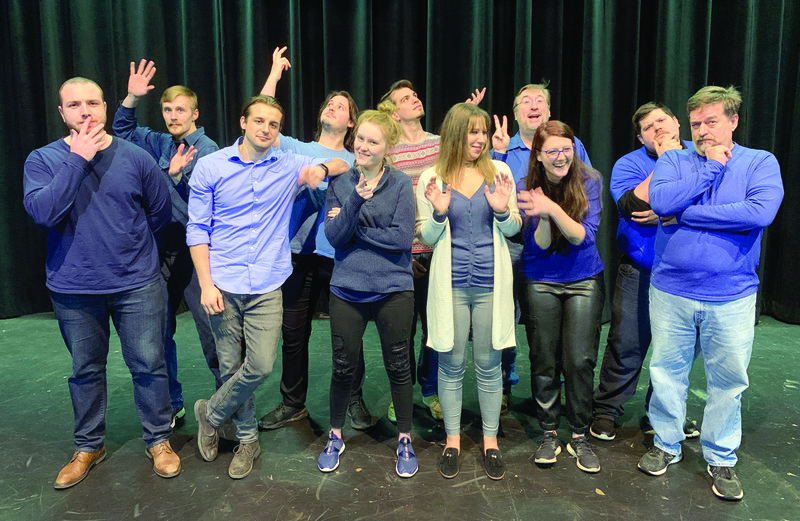 Stage Play: The cast of "Ken Ludwig's The Three Musketeers" have a little fun on the Callaway Stage of the South Arkansas Arts Center, 110 E. Fifth St. in El Dorado. The spring production will open the first weekend in March.

The South Arkansas Arts Center's cast for its spring production of "Ken Ludwig's The Three Musketeers," scheduled to run March 6-8 and 12-15, will include veteran and new faces alike. This new adaptation of the 17th century classic by Tony-winning playwright Ken Ludwig features a heavy dose of contemporary humor and slapstick, served up with a new, less than traditional "look."

The cast for "Ken Ludwig's The Three Musketeers" includes Dalton McQuistion as the reckless, romantic hero, D'Artagnan; Matthew Youssef as dark and brooding Athos; Steven Vick as light-hearted Porthos; and Kenneth Burns as Aramis, the swoon-worthy youngest of the musketeers. Clay Callaway will play the dastardly Cardinal Richelieu, with Rhett Davis as Richelieu's right-hand man, Rochefort; Jim Yates as the bumbling King Louis Xlll; and Joel Cheshier as Treville, the commander of the Musketeers. The female roles will be played by Kaila Emery as D'Artagnan's fearless younger sister, Sabine; Hali Pinson as the conniving Mi'Lady; Lainey Walthall as the beautiful, naïve Constance Bonacieux, who knows secrets about the Queen; and Marsha Antoon as the unfaithful Queen Anne.

"We have a stellar cast with lots of seasoned SAAC veterans, some new faces to the SAAC stage, and some who haven't been on the stage in a while," said Gary Hall, director for the production. "It's a fantastic group dynamic. Because most of the actors play multiple roles (up to five different roles in some cases), the show has more of an ensemble feel.

"The cast is already starting to bond and embrace the zaniness of the script. It's exciting to see such enthusiasm from day one. I'm looking forward to the collaboration with the actors and the production staff," Hall said. "This should be a spectacularly absurd and action-packed journey, and the cast seems poised to take the driver's seat and get us there."

This stage adaptation of Alexandre Dumas' swashbuckling novel features a rousing and fun story, with elegant costumes and sets, as well as lots of laughs and slapstick. D'Artagnan, his sister and three friends fight in the king's musketeers for the honor of the queen, who is trying to hide her affair with the Duke of Buckingham. The evil Cardinal Richelieu and the scheming Mi'Lady de Winter try to foil their success at every turn. The adventure takes them to England and back as they fight for their king and queen. But this is also a show with a lot of heart, Hall said, as it tells a tale about adventure, romance, following your passion and doing the right thing, along with a lot of hilarious physical action.

For more information about "Ken Ludwig's The Three Musketeers," call the SAAC office at 870-862-5474 or visit the website at www.saac-arts.org.