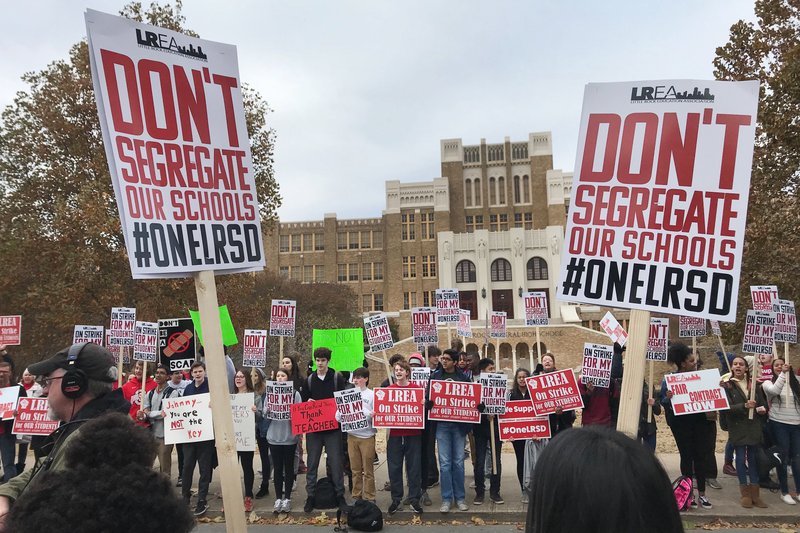 In this Nov. 14, 2019, file photo, teachers, parents and students picket outside Central High School in Little Rock, Arkansas. Little Rock's schools shut down for two days starting Monday, Feb. 10, 2020, after hundreds of staff members called in sick, though the local teachers' union hinted the absences are tied to ongoing complaints about the state's control of the district.

LITTLE ROCK — Little Rock’s schools shut down for two days starting Monday after hundreds of staff members called in sick, though the local teachers’ union hinted that the absences are tied to ongoing complaints about the state’s control of the district.

The Little Rock School District announced late Sunday afternoon that it had cancelled classes for the first two days of the week after more than 250 staff members called in sick. The 23,000-student district said the number of absences nearly doubled from recorded absences the previous week.

“We apologize for this inconvenience and look forward to our students and staff returning to school healthy and ready to finish the school year strong!” the district said in a Facebook post announcing the closure. The district said it’s using the days off to do additional cleaning to prevent the flu’s spread.

The decision comes after other Arkansas school districts closed because of the flu. Little Rock last week closed two elementary schools for two days because of a large number of sick students. Flu activity has been high in Arkansas and the state Department of Health says at least 36 people have died from the flu this season.

Arkansas took over Little Rock’s schools in 2015 because of lagging test scores at several schools. Teachers last year went on a one-day strike because of the takeover and their loss of collective bargaining rights. The state Board of Education has voted to return the district to a local school board that will be elected in November, but with the state maintaining some authority.

The union said Sunday night that it couldn’t discuss the medical status of individual educators because of privacy laws, but noted how hard the flu has hit the district. Little Rock Education Association President Teresa Knapp Gordon, however, also called the state’s takeover part of a “confirmed sickness” in the district.

“We are sick of more than five years of state control that by the state’s own measures has left our students worse off than before the state takeover,” Gordon’s statement said. “The state’s treatment plan for these ailments would silence the voices of educators, ban this community from having a say in who leads our schools, and prohibit any treatment of disordered district contracts that rob resources from our students.”

The district on Monday said it hoped teachers would never abuse sick leave and that the union’s statement “would not be used as justification to disrupt the learning environment.” The district has said the missed days will be made up later.

The absences follow other moves by the state that have drawn teachers’ ire, including telling employees at four schools that they will be given non-renewal notices for the upcoming year if they can’t find other jobs within the district. Three of the schools are closing and the fourth is converting to a magnet school.