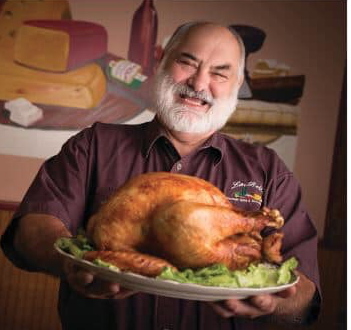 He’s preceded in death by his parents, brother Richard Robinson. Jim’s survived by his wife of forty-two years Beth Lester Robinson, his son Clayton W “Clay” Robinson of El Dorado and his daughter Lora “Lacy” Robinson Leftridge of Hot Springs AR. He has one grandson Waylon Daniel Leftridge, son-in-law Danny Leftridge. He also is survived by Brandi Lyons, Clay’s fiancée. He is survived by brothers John Hays, his wife Carolane, and Michael Robinson. Brother and sister in laws Bobbie Lester Leggett and Gerald Leggett and Billy and Susan Lester.

Jim finished high school at Windsor Locks CT. He joined the U S Navy and proudly served as an electrician’s mate on the USS Darter 576. These were some of the best years of his life serving with his fellow submariners. Words cannot express the love and comradery he felt for this crew.

Jim returned to El Dorado in 1976 to start construction side of Hays Rental with brother John. He then went on to open La Bella Gourmet, Gifts and Delicatessen in 1986. He opened a downtown location on Jefferson and then merged both locations in 1992 when he and Beth purchased the old Samples Department Store building. La Bella was his touch with New England style deli food he craved. His friend Mo from Windsor Locks helped him learn how to make grinders and pizza etc. and shared his recipes. Over the years Jim added to menu of La Bella making an upstairs ball room for wedding receptions, reunions, and all types of celebrations.

Jim retired in December of 2019 selling the business to his former employee Derick Watts.

Jim served on the A & P Commission. He was a local tourist attraction because everyone brought their visitors in to see him wearing shorts year-round. We were there downtown for the first Musicfest in 1987. Jim was a natural ambassador for El Dorado. He never met a stranger and extended true Southern hospitality to all who entered La Bella. Our children grew up downtown and are a part of each stage of growth. Whether Mr. La Bella was teaching kindergartners to make pizza in the kitchen or giving out samples of fudge, he was in his element. He taught his customers how to eat crawfish and get meat out of tails. He relished getting customers to try new foods.

Jim and Beth loved their houseboat at Shangri La on Lake Ouachita. It was twenty years of relaxing on lake with dear dock family. PopPop loved teaching Waylon how to fish and swim. He and Gerald spent many fishing trips on lake with houseboats side by side. We met some of our dearest friends while houseboating.

Jim was a member of Marrable Hill Chapel. He also had a special love for Victory Bible Camp in Carthage AR.

Memorial Donations may be made to Victory Bible Camp in care of Marrable Hill Chapel, 110 Chapel Avenue, El Dorado AR 71730 or donations can be made to Arkansas Inland Maritime Museum in North Little Rock AR, home of the USS Razorback.