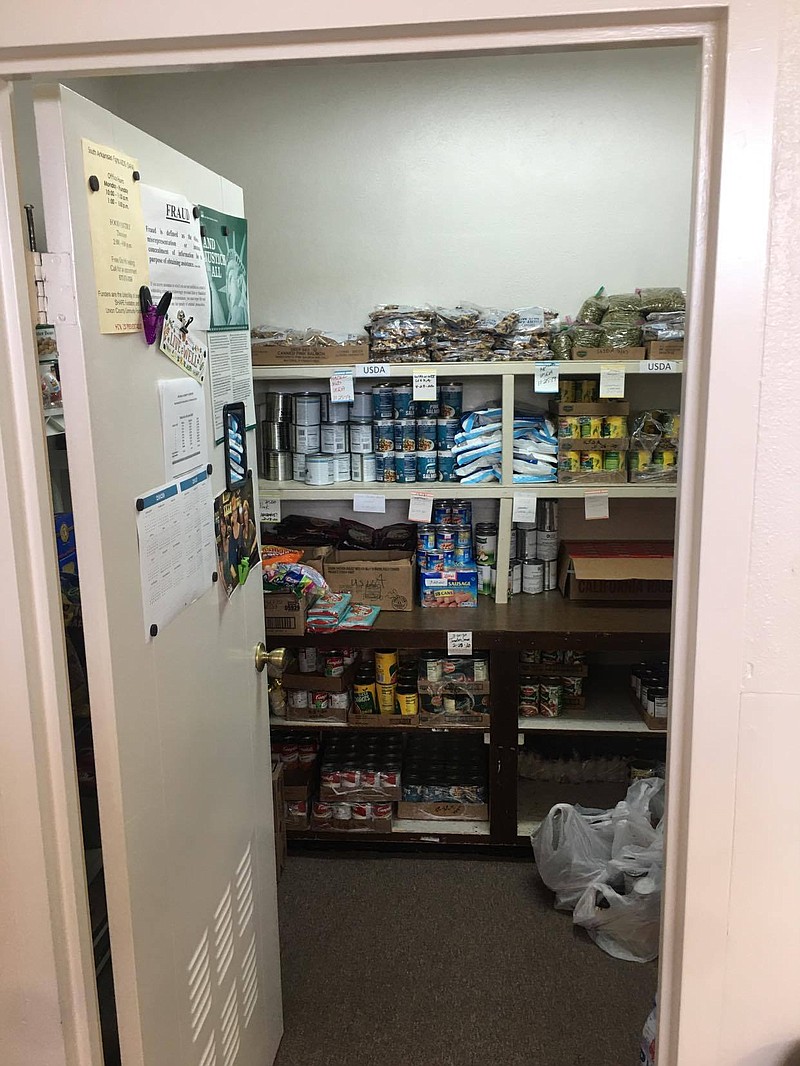 South Arkansas Fights AIDS has been able to keep up with the food demand for their clients and gets plenty of food donated, Janet Beane said. (Marvin Richards/News-Times)

Food insecurity is growing nationwide as the rate of unemployment steadily rises amid the ongoing COVID-19 pandemic.

According to the Center on Budget and Policy Priorities (CBPP), currently, adults in households with children were likelier to report that the household didn’t get enough to eat: 17%, compared to 10% for households without children. And 11 - 17% of adults with children reported that their children sometimes or often didn’t eat enough in the last seven days because they couldn’t afford it, well above the pre-pandemic figure based on data collected on 27 million Americans in a Census Bureau Household Pulse survey conducted from Nov. 25 through Dec. 7.

The pre-pandemic figure for adults with children facing food security hovered just around 3.4% this time last year, according to the United States Agriculture Department.

Simply put, 1 in 6 adults with children lacked sufficient food in the last seven days, according to the CBPP.

These numbers become even more alarming when analyzed within communities of color. Black and Latino adults were more than twice as likely as white adults to report that their household did not get enough to eat: 22% and 21%, respectively, compared to 9% of white adults, according to that same Census Bureau Household Pulse survey.

With the current state of food insecurity in the U.S., food banks nationally are struggling to keep up with the growing demand for food. The Washington Post reported that the U.S. could face shortages of eight billion meals over the next year. Numerous news outlets reported on the long lines that wrapped around food banks across the country during Thanksgiving.

When contextualizing this national backdrop within Union County and El Dorado, there are some parallels in data. According to the United States Federal Reserve, Union County saw an unemployment close to 12% in April of this year, right at the height of the first wave of the pandemic. The unemployment rate has dropped in the months since, but still hovers close to 8%, according to an October report by the Federal Reserve.

According to a March 10 report conducted by Winthrop Rockefeller Foundation and Entergy, 26% of Union County residents meet ALICE (Asset Limited, Income-Constrained and Employed) standards with 20% in poverty and 55% above the ALICE threshold. Those that qualify for ALICE are just above the federal poverty line but are still unable to afford basic needs, like housing, child care, food, transportation and health care.

Like the Census Bureau Household Pulse national survey, the Winthrop Rockefeller Foundation and Entergy report finds that Black and Hispanic households are disproportionately impacted by financial hardships and food insecurity and more likely to be ALICE.

Are local food banks able to keep up with the growing demand for food? Are they getting a steady supply of food donations? Are the residents of the county getting enough food?

“Have we been able to keep up with demand? The answer is yes,” Jackie Holmes, Salvation Army statistician and grant writer said. “Due to grants for our food purchases, and with the steady donations from donors, we haven’t seen our shelves go bare since the start of the pandemic.”

Holmes gives specific numbers around the intake of food they’ve received and food they have given out in the month of November.

The Salvation Army also runs a soup kitchen and in the month of November, 3,420 meals were served, Holmes said. The organization also provides senior commodities, where senior citizens can pick up grocery bags once a month; the nonprofit gave out 528 bags in November. An additional 389 bags of groceries were given out as part of a USDA Rural Development program the Salvation Army also partakes in.

The Salvation Army has served close to 7,000 individuals and families within Union County just in the month of November.

“We have definitely seen an increase in demand for food, we have given out more groceries than we normally do,” Holmes said. “But we encourage people to continue to give monetary and food donations. That is how we are able to keep up with the demand.”

“In the last two months, we have given out over 600 food bags,” Gina Mitchell, board president of the Interfaith Help service, said. “People are eligible to come and get food every two weeks. We have some regulars that come every two weeks and every day we see people who have never had to come to a food pantry before — the demand has increased 10 times in recent months.”

“Last year at this time, people were only eligible to come for food once every three months. We changed our whole food pantry operation in March when the pandemic hit; the way we distribute food now is just so different from how we did it last year,” Mitchell said.

St. Mary’s, which purchases a lot of its food from the Arkansas Food Bank, has been able to keep up with the increased demand thanks to generous monetary and food donations, Mitchell said.

To further stress the hard times many in Union County are facing, Mitchell shared some anecdotes of experiences she has encountered first hand.

“We have families that come because family members from another town or even state have lost their job, so they have now consolidated all of their resources into one household. So there may be eight to 10 people living in a house and all of them unemployed; that situation is becoming pretty common as the families we serve are trying to cut down on expenses,” Mitchell said.

Mitchell encouraged those that want to consider giving monetary donations to the Interfaith Help Service and for those that need help with food to come by. No questions will be asked around one’s financial history; they are there to help, Mitchell said.

SAFA has a food pantry reserved for the clients they serve but with the hard times looming, the organization has bent its rules a few times.

“We offer food to people that have HIV/AIDS, but during this COVID pandemic we have had several homeless people or just really down and out people come and ask us for food,” Janet Beane, Director of SAFA said. “We gave them food but I always explain to them that this funding comes for people living with HIV/AIDS but our basic rule is no one leaves here hungry. So we give them the normal amount of food that we would give a client.”

Beane said SAFA has been able to keep up with the food demand for their clients and gets plenty of food donated.

SouthArk has been running a food bank for about four years now, according to SouthArk professor and food bank organizer Dr. Ken Bridges.

“We just received a $50,000 grant from Verizon which allowed us to give out food to more than 130 students so we’ve been fortunate to be able to find grants and donations to use as we have seen a considerable demand at the college,” Bridges, who is also a volunteer at the Interfaith food pantry at St. Mary’s Episcopal Church, said.

“I know a lot of the students we serve at our food pantry also use the services of other food pantries just to make ends meet,” Bridges added. “Normally we only see a few clients a month, but there has been a considerable demand and we’ve also seen a decrease in enrollment because of the pandemic and financial hardship.”

Across the board, all the food banks report seeing an increase in demand for food in Union County, but luckily have been able to find ways to keep up with that demand. However, Bridges warns community members to not take that for granted or to stop giving.

“People in this area have always been very generous around Christmas but we need to remember that this need is going to continue well past Christmas and well into the New Year,” Bridges said. “Food pantries are really going to need help, so whatever people are willing to give is going to be of great help to many throughout this community.”