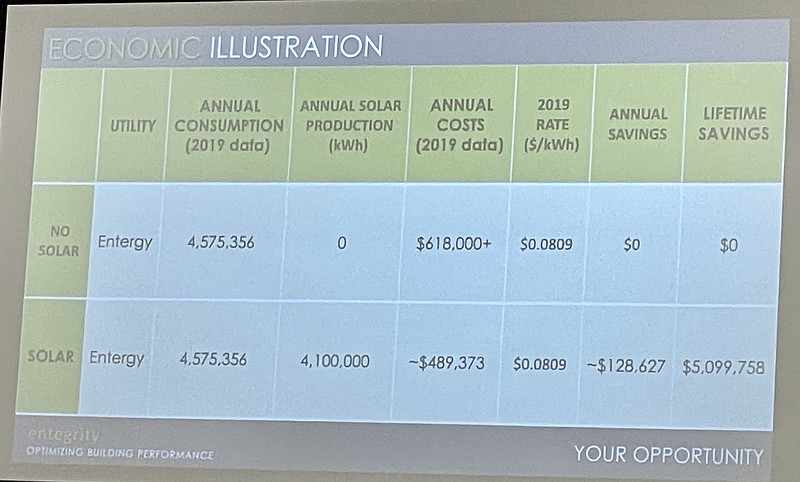 The El Dorado School Board met Monday, where among other agenda items, they considered a proposal to go green with a solar power project devised by the energy company Entegrity.

Entegrity, based in Little Rock, is an energy services, sustainability and solar development company specializing in the implementation of energy conservation and renewable energy projects, according to the company’s website.

The company was looking to enter into a 28-year contract with the school district to build a solar power grid to help offset energy costs, extend financial savings and be more Earth-friendly. John Coleman and Jacob Estes of Entegrity gave a presentation to the school board about the overall benefits of moving to solar power. One of the headlining statistics the two gave in their presentation centered around the current costs of energy for the school district versus the potential long term savings.

According to Entegrity, the ESD spends right at $618,000 annually for energy. With solar, that annual amount could be reduced to $489,373, they said, a yearly estimated savings of $128,627. The company also estimates that over the potential 28-year contract period, the ESD could save $5,099,758 in energy costs.

Both Coleman and Estes took questions from members of the school board around the project, upkeep of the solar panels and grid and the long-term benefits. Gibson asked about the total cost of the solar project and Jacob Estes estimated that the project will cost between $3-3.5 million. On Entegrity’s website, the company guarantees that the savings will exceed the project’s costs, or they will write a check for the difference. The company already has projects with other school districts within Arkansas, including the Searcy County School District and the Batesville School District.

The school board took up the matter and voted in favor of the 28-year contract with Entegrity.

“I’m excited about a couple of things with this partnership but the first is saving money for the district,” Tucker said. “We’re looking at six figures in savings each year; that is a great opportunity for us to be able to reinvest that money into our students. Secondly, we’re doing something great for the Earth and will be making this a better place to live.”

With the passing of the Entegrity contract, the school board wished everyone in attendance a happy holiday and broke out into executive session.