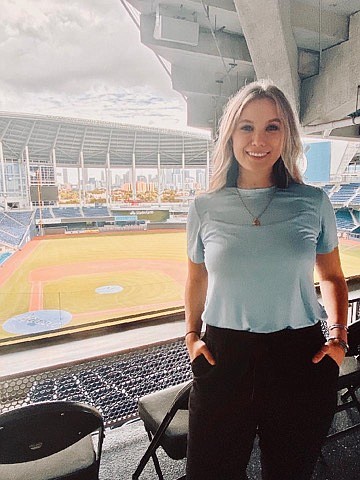 Norphlet High School grad Kelsey Chanler stands at Marlins Park, home of the Miami Marlins. Chanler is working to continue her career in sports photography amid the ongoing COVID-19 pandemic after shooting for the premiere collegiate Cape Cod League, scoring an internship with the Minor League Rocket City Trash Pandas that was called off because of the pandemic and shooting friend and current MLB star Ryan Stanek during a pro game. (Contributed)

Baseball’s next generation of stars have been viewed in a unique way by one former Union County softball standout.

Through her camera lens.

Kelsey Chanler, a member of Norphlet’s final graduating class in 2015 who later played collegiately at Ouachita Baptist, has worked with some of the sport’s brightest young prospects who could become household names in short order.

After her career ended at OBU, she attended Arkansas Tech, graduating earlier this year with a degree in graphic design with a minor in communications.

It was also at Arkansas Tech where she took an interest in baseball, working at the school’s athletic department as their photographer.

Two years ago, she got the opportunity to see some of the country’s best amateurs up close by doing an internship with the Cape Cod League.

Based in Massachusetts, the league is the premier summer league for baseball’s top collegiate talent. According to the league’s website, one in every six major league players played in the league, and there are over 300 active alumni in the majors annually. Through its history, the league has produced over 1,250 major leaguers.

“I lived in Harwick with a host family,” Chanler said. “It was a very cool and great learning experience for me. My boss called to interview me, and I had just interviewed for the photography position. Before the interview was even over, she had already offered me the internship. About two weeks before I came out there, and I had to get there a couple of weeks before the players did to prep everything for work events for sponsors, she realized that I was a graphic design major, so she took me on as a graphic design and photography intern.”

As one might expect, her day-to-day routine was rather hectic.

“My daily routine wouldn’t start until about three in the afternoon,” Chanler said. “I would pick a team to go cover and take photos of because I wasn’t just a team intern, I was the league intern, and the only league intern for photography in that area.

“I would pick an area to cover and try to get shots. Then I would come home or figure out the closest place to stop that had WiFi and put together graphics so all of the final scores were posted on social media like Facebook, Instagram and Twitter.

“Graphic design-wise we had to do sponsor graphics. I did all of the game day graphics, cancellations, rain delays, all of that. Rainy days were probably the longest days, just sitting around and waiting for a text to say, ‘Hey, this game is canceled or rescheduled for this time.’ It’s a very tedious thing.

“You have to sit around and wait all day, but it was a huge learning experience. I got to work with a lot of photographers and kids my age. I also got to work with some very experienced photographers that have worked with these teams for years and learned more than ever. My skills completely went up after I left Cape Cod. You can tell the difference in my work.”

Being away from home brought its own perspective to Chanler.

“It was a little weird at first when I got there, but luckily, I kind of knew of my host family before I got there since I had a friend that played at Arkansas that had lived with them the summer that he played,” Chanler said. “It was really funny. Back when he lived with them, he would Facetime me often, and there was always his host brother in the background.

“I can always remember him, always having his host brother around everywhere he went at night. The first day I got there, my host mom wasn’t there when I arrived, and my host brother was the one who helped me get settled in.

“He told me a few weeks later that when I got there, he realized that he knew who I was and why he knew me. He called his mom, and was like, ‘Mom, I know this girl. I know who she is.’ His mom told him, ‘Is that a bad thing? Do we need to tell her she needs to go home?’ It was pretty funny.

“I was lucky that I had such a good host family. They made me feel very welcome. There was normally someone at home in the afternoon when I wasn’t at work. Their sons were close to my age, but they all had girlfriends, so I had somebody to hang with since most of the guys were busy throughout the day. They made it very easy for me to adjust to a new environment. It’s such a fast pace and a fast role in the Cape league.”

Of course, the experience of getting to see future professional players in action is also a unique one that most don’t get the chance to see.

“The Cape really gave me a lot of exposure to meet a lot of cool people that have been drafted,” Chanler said. “It’s been a blast to watch them the past few years go so far. Some of them didn’t get drafted this year with the circumstances, so I hope that a few of them will go pretty early next year.”

One of the more prominent names she has worked with is Arizona State’s Spencer Torkelson, who the Detroit Tigers selected with the No. 1 pick in the draft back in June.

“I got to work with him for about a month and a half,” Chanler said. “He came for the first few weeks then went to (Team) USA. I got to know him pretty well. I was friends with a lot of the USA players that were from Arizona State. I got to watch him play when I was in Arizona last summer. I got to watch him get drafted first overall, which is pretty neat.”

In addition to her work in the Cape Cod League, Chanler has also covered Division 1 sports along with the Great American Conference.

But she has also shot at an even higher level: a game in the big leagues.

Two years ago, she covered former Arkansas pitcher Ryne Stanek, who was Tampa Bay’s first-round selection in the 2013 draft and is currently with the Miami Marlins.

“When I was in high school, he started playing at Arkansas,” Chanler said. “He has a very unique last name, and one of my family members actually has the same last name, so we’ve always had the joke that we were distant family. We stayed close throughout his college career and when he got drafted.”

She also got to see Stanek pitch at one of the sport’s most famous venues.

“The weekend of my 21st birthday, he played against the Yankees, so he invited me to come to New York and get to watch him play,” Chanler said. “I’m a lifetime Yankees fan, so I had to sit there in Yankee Stadium and wear a Tampa Bay hat.”

Chanler had hoped to start working in the minor leagues this summer, but the outbreak of the coronavirus pandemic didn’t allow the season to start.

“I took a seasonal position in March with the Double-A team for the Angels, the Rocket City Trash Pandas, which is in Madison, Ala.,” Chanler said. “It’s in the multi-media department, so I would be doing graphic design.

“I’ve been on hold hoping maybe I could move to Alabama and start my job, but unfortunately, that did not happen. MLB teams start their hiring process in October, so I’m kind of on hold waiting for October to come so I can start applying again.”

Presently, Chanler is working locally with her own photography business.

“I’ve had it since I was in high school,” Chanler said. “I started it in 2012 when I was a freshman. I do senior pictures. I kind of do my own business on the side.”

She added that it’s been tough to drum up business during the pandemic.

“It’s been a little difficult,” Chanler said. “When everything kind of started picking up, I slacked back off because when it first started, I was doing a couple of shoots, then everything got kind of strong and I decided it was best to not take any clients then, so I’ve started advertising again to do senior pictures when that season is coming around again.”

Chanler said her softball career played a prominent role in her wanting to get into baseball.

“I didn’t decide to get serious about having a college softball career until it was almost too late,” Chanler said. “I didn’t realize that I was going to excel because I didn’t peak until my junior year thanks to Strong. I went there for my junior year, and it taught me that, even though it’s late in the game, being a female in a man’s sport, that if you work hard enough, you can make it even though it’s not the easiest task to try and do.”

Chanler transferred to Norphlet for her senior year, and being a part of the final graduating class is something she will always remember.

“Our senior year, Easter weekend, we had a softball tournament,” Chanler said. “Our coach walked in to make some copies and the office of the high school was on fire. It was kind of a bittersweet thing because we got to finish high school in the elementary school, so for a lot of them, they were finishing their senior year in the same building they started. It really opened up our eyes because this was it. Norphlet was closing, so we had a legacy to try and leave.”

Now she hopes not just to leave her own legacy, but be a part of the legacies of baseball’s next generation of stars.