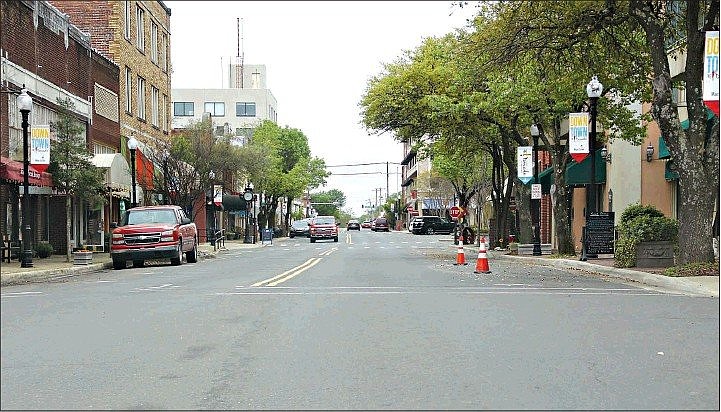 This March 25 photo shows a near-empty Main Street as many retail and hospitality businesses, as well as some service providers, have had to shutter their storefronts or slow operations due to the ongoing COVID-19 pandemic.

With Main Street programs and small businesses across the country reeling from the effects of the ongoing coronavirus (COVID-19) pandemic, local programs have joined forces with their state and national parent organizations in a push for federal assistance.

Main Street El Dorado is partnering with its sister cities nationwide through Main Street Arkansas and Main Street America to ask for support for the Main Street Community Recovery and Revitalization Program, a $100 million competitive grant proposal to provide relief for local Main Street programs and small businesses within commercial and historic districts.

Beth Brumley, executive director of Main Street El Dorado, said the nonprofit group is feeling the economic squeeze that has been brought on by COVID.

Brumley said MSE has not generated any revenue since presenting a show in February that featured the iconic Harlem Globetrotters.

MSE’s annual operating budget relies heavily on fundraisers, such as the Globetrotters’ show, that are held throughout the year but the group has been forced to cancel and postpone 2020 events due to the ongoing public health crisis.

Brumley also noted that many downtown events are designed to increase foot traffic for shops and restaurants in the Union Square District.

MSE regularly partners with the Downtown Business Association on ideas for such events, many of which offer free admission and activities.

With activities having slowed over the past few months, Brumley said MSE is exploring options to find other ways to fund its program.

“There’s been no income since February from the Harlem Globetrotters. It depends on how the rest of year goes. MusicFest is usually a big fundraiser for us but with COVID, we don’t know what the state of MusicFest is for this year,” Brumley said.

MusicFest 2020 is scheduled for Oct. 3, with Snoop Dogg tapped to headline, but with uncertainties that have been posed by COVID-19 and predictions of another round of outbreaks in the fall, Brumley said organizers do not yet know if the festival will be canceled.

Since 2017, MSE has partnered with the Murphy Arts District to present the annual festival.

MAD books the musical headliners and handles the ticketed shows, while Main Street focuses on the “festival” component — activities, attractions, vendors and live music on side stages in the Union Square District.

Brumley said the group had hoped to make money from Bugs, Bands and Bikes, which MSE was reviving this year after a seven-year hiatus.

The festival ran for 15 years before Main Street decided in 2013 rethink the event, reportedly due to waning participation from bikers.

BBB had grown into a two-day festival and in 2014, the event was rebranded as the Southern Folk Festival to align with the goal of El Dorado Festivals and Events, Inc., which gave birth to MAD, to promote and highlight southern culture.

The first day of the SFF was rained out and though it was a moderate success, MSE decided to pull the plug after one year.

BBB was going to be rebooted this year as a one-day event, fulfilling requests by many in the community for its return, Brumley previously said.

For several years in the aughts and 2010s, MSE booked concerts and other live shows in the El Dorado Municipal Auditorium to help raise money. The shows featured popular country, rock, pop and Christian music acts and were well-attended.

“We don’t do as many of those anymore MAD and especially now with COVID, so it’s getting harder to fund our program,” Brumley said.

Money that is raised by MSE supports various projects in downtown El Dorado to help maintain the economic vitality of the city’s Central Business District.

MSE offers a matching mini-grant program of up to $1,500 to help downtown businesses with maintenance and repairs; assists with retail promotions; and funds public art projects, such as the guitar statues that dot the downtown square.

The group also helmed a project for and covers the costs of free Wi-Fi service downtown and is responsible for beautification projects, including downtown benches, cigarette urns/ashtrays and banners.

“We also partner with the El Dorado Historic District Commission on historic preservation projects. We don’t have the same mission but we work closely with them and we’re both under the (Arkansas Department of Parks, Heritage and Tourism),” Brumley said.

“I’m trying to figure out how to tell our story so that people get the impact of our program and show the importance and value of our program. It’s not just MusicFest. We give a lot of money to downtown,” Brumley said.

She said Main Street communities across the nation are facing similar struggles because of COVID, noting that MSE is fortunate in that it receives assistance from the city of El Dorado and corporate sponsors, many of whom are also struggling to stay afloat during the public health crisis.

“Speak up for Main Street!”

MSE is participating in an outreach effort to drum up support for the Main Street Community Recovery and Revitalization Program.

The grant, if approved by Congress, would be administered by Main Street America, via the United States Economic Development Administration, and funneled through state coordinating programs to help Main Street communities survive COVID-19.

State coordinating programs in Arkansas are Main Street Arkansas and the Arkansas Department of Parks, Heritage and Tourism.

Congress is negotiating the details of a second economic stimulus package to offer relief for individuals, families and businesses who are facing financial hardships because of COVID-19.

In March, a $2.2 trillion economic stimulus bill known as the CARES (Coronavirus Aid, Relief, and Economic Security) Act was passed by Congress and signed into law by President Donald Trump.

The bill offered some assistance in the form of loans for Main Street communities and businesses and Main Street America is working with local and state programs to make sure they are included in the next federal stimulus package.

Brumley noted that federal lawmakers are scheduled to recess this month so time is of the essence to let federal elected officials know how Main Street communities and businesses have been impacted by COVID.

MSE is doing its part by asking local community and civic leaders to join the “Speak Up for Main Street!” campaign.

Brumley said the group has reached out to downtown merchants, elected city and Union County officials, the El Dorado-Union County Chamber of Commerce and state Rep. Matthew Shepherd (R), who also serves as Speaker of the House.

Officials have been asked to complete a form in support of the recovery effort by visiting mainstreetamerica.salsalabs.org/speakupformainstreet/index.html.

“There are questions they can answer and they can add their own comments. I also sent it to my board (of directors) and we’re asking everybody that we can think of,” Brumley said.

Those who complete the form are encouraged to submit it as a letter to their representatives in the U.S. House and Senate to consider for passage in the next economic stimulus bill.