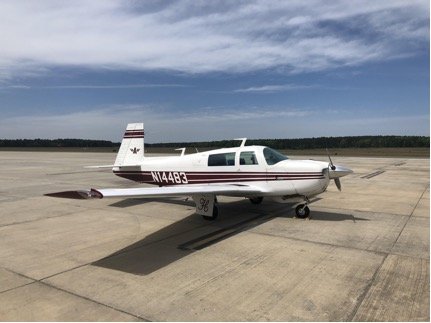 This Mooney M20F successfully completed an emergency landing at the South Arkansas Regional Airport at Goodwin Field Thursday afternoon after the plane’s pilot detected smoke in the cabin. Neither the pilot nor passenger were injured in the incident.

Magnolia Highway residents may have heard the rush of emergency personnel that responded to an emergency landing at the South Arkansas Regional Airport Thursday in the early afternoon.

Jonathan Estes, airport manager at the SARA, said the incident, an emergency landing of a small aircraft, resolved with no injuries to either the pilot or passenger who were on board. Along with Estes, emergency personnel from the Union County Sheriff’s Office, El Dorado Fire Department, El Dorado Police Department, Pro-Med ambulance service and the Office of Emergency Management responded to the plane’s declared emergency.

“Declaring an emergency is no small thing,” Estes said. “It’s like calling 911 … You don’t want to declare an emergency unless there is one, and his was.”

Estes was the lone airport staff member working Thursday at around 1:50 p.m. when he received notification from the Dallas/Ft. Worth Air Traffic Control office that a Mooney M20F in local airspace had declared an emergency, citing smoke in the plane’s cockpit, possibly resulting from an electrical fire. Two people were onboard the aircraft.

After alerting emergency services, Estes contacted the plane (call sign N14483). The pilot said the craft was about five miles out from the fourth runway at the airport, but did not provide a status update.

“I didn’t know if the status had gotten any worse or better,” Estes said. “Normally when people are stressed, they’re not wanting to talk. They’re kind of focused on the task at hand.”

The SARA Aircraft Rescue and Firefighting (ARFF) truck was positioned to follow the Mooney down the runway once it landed in order to respond to the craft’s needs immediately. However, when the plane landed, all appeared to be fine. 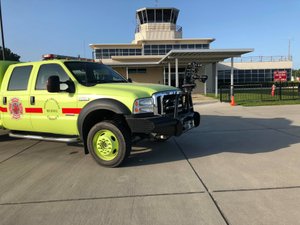 This file photo shows the South Arkansas Regional Airport's Aircraft Rescue and Firefighting (ARFF) truck, which responded to an emergency landing at the airport Thursday.

“I was about 100 feet away from where they landed,” Estes said. “I couldn’t see any smoke or fumes inside the cabin or flowing outside of the aircraft.”

“Long story short, he ended up making it to the ramp safely,” Estes said.

The cause of the initial fire onboard is still under investigation, which is typical per Federal Aviation Administration regulations, Estes said. The pilot told first responders he pulled a breaker or fuse connected to an alternator, which is what had caused the smoke in the cockpit, before landing.

This is not the first time the SARA has responded to an emergency landing necessitated by smoke inside the aircraft. In March 2016, a United Express flight carrying 66 passengers and four crew declared an emergency over El Dorado when smoke was spotted in the rear of the plane. The craft landed safely with no injuries, and no cause was discovered for the smoke, Estes said.

Estes said it is generally held that from the time smoke is detected on an aircraft, the crew has 15 to 20 minutes to get on the ground, since smoke can impact visibility. The United Express plane that emergency landed at SARA in 2016 landed in 12 minutes, impressive for a twin engine commercial jet that was cruising at 37,000 feet when the smoke was detected.

“[Smoke] fills the cabin,” Estes said. “If you’ve ever stood next to a campfire, imagine trying to fly like that, and in a plane, there’s no way to ventilate that smoke.”

SARA is currently struggling financially as a result of the ongoing COVID-19 pandemic. Estes told El Dorado city officials earlier this week that at least one airport staff member would need to be laid off as fuel expenses outpace revenue. Last Sunday, Estes reported having seen only one commercial passenger this month.